We sailed from Spanish Wells to our favorite little island just outside of Nassau, that we call ‘our island.’ 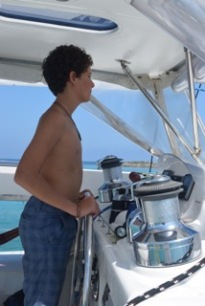 Danny was able to find an exceptional deal on some folding props that we have needed for Tanda Malaika, and it is cheaper for him to fly from Nassau to Miami to pick them up than it is for them to ship them to us, so tomorrow morning he will fly off for the day and return tomorrow night. We have to return to Spanish Wells as soon as he gets back, because our girl is going to be pulled out of the water there so we can replace a faulty sail drive seal and patch up the keels from our little run in last week.

When we awoke we got our swim suits on and prepared for some exploring time in the water. Jude and Mycah first rigged the fender up to the spare halyard line and we took turns flinging ourselves off the top of Tanda Malaika. It’s quite a rush. 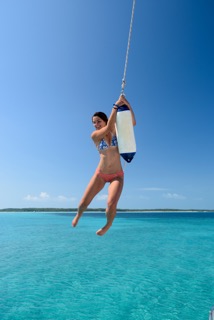 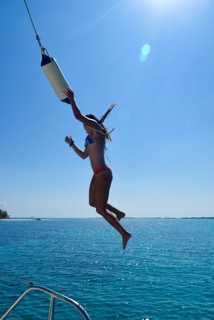 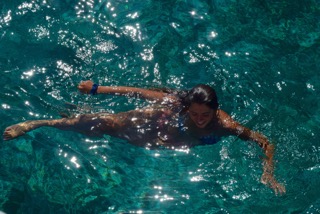 With mask, snorkel and fins on, Danny and I went grocery shopping…he had his Hawaiian Sling in hand and I had a mesh bag. I came across a beautiful turtle who had three remora attached to his belly. We swam together for a short while before I hurried off to catch up to Danny who was already shopping in the lobster isle. He speared three lobster for dinner.

As I snorkeled close to shore in search of more lobster among some rocks, an endless school of tiny silver fish circled around me. There were thousands of them in every direction and they swam with me for some time. I felt like a mermaid.

While we were diving and snorkeling around in about 25ft of water, we came across about 600ft of anchor chain lying on the reef. It had obviously become wrapped around the coral heads when someone tried to anchor as they zig zagged across the reef, and after failed attempts to raise it up they finally cut the rode and set it loose. It frustrates me when I see this because there are huge patches of sand that are so easy to see that can be anchored in, and yet people still anchor in coral and damage it. These people ended up losing several thousand dollars worth of anchor chain in the process. 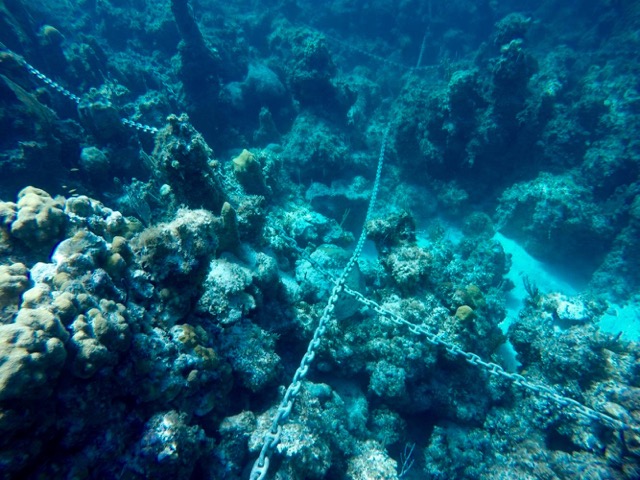 Since we are always up for adventure (and a good challenge), the creatures and I decided that we were going to selvage the chain and sell it someplace. Danny tried explaining to us that first of all, there’s no way we could raise such a heavy chain without the right equipment – which we don’t have, and second of all, who on earth would we sell it to. The creatures and I saw no problem with either of the issues he mentioned, so we took the dinghy over to the spot, draped a tarp over its sides so the chain wouldn’t mess the dinghy up, and dropped the dinghy anchor in sand right where we needed it to be. When we looked down at the beginning of the chain, about five feet away by a huge coral overhang, a beautiful big black nurse shark lay fast asleep.
I had dinner rolls cooking in the oven back on the boat, so after about half an hour of tugging till my shoulders ached and our efforts seemed pointless, I paddled back to the boat while the creatures reconsidered their plan. I sheepishly gave Danny the report that the chain was a lot heavier than I expected, and had to look at the ‘I told you so’ look on his face. We kept expecting to hear the creatures return, but they never did, and after about an hour Danny and I took two of the paddle boards over to where they were and were instantly asked for food and bolt cutters. To our amazement they had pulled in about 100ft of chain (300lbs worth) and were all so exhausted but didn’t want to quit. They needed bolt cutters because they had reached a place where they couldn’t unravel the chain from the coral. Danny finally convinced them that they had done an amazing job but we simply didn’t have the necessary equipment to complete the job, so after a requested moment of silence, they lay the chain back down again.

I told the creatures I was so proud of them for their determination, team effort and perseverance. When they returned home, their legs and arms felt like jello, and Aidan walked into the hanging fly glue trap on three different occasions on accident. I guess his brain was fried too! This evening they are all feeling some muscles they didn’t realize they had.

We finally pulled ourselves away from our beautiful place and set out for the anchorage in Nassau. I have no doubt that we will all sleep soundly tonight.