Danny arrived home yesterday on the late afternoon ferry, and we were so excited to see him. About a minute before we saw the ferry he texted me saying he had missed it and the next one wouldn’t be in for 2 hours. I didn’t buy it, but it was a nice try! It’s always wonderful to sit and listen to him talk about his adventures. 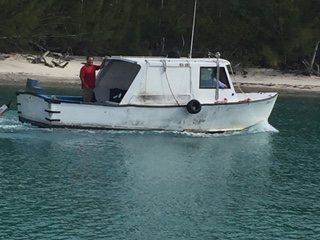 For the past three days we have been scrubbing Tanda Malaika’s belly. Almost over night, she has grown an extremely healthy crop of algae that looks the same thickness, color and length as Grizzly Bear fur. It is by far the toughest stuff we’ve had to deal with thus far! With scrub brushes in hand we spent hours removing the hairy stuff and barnacles. On the first day of scrubbing we fought current as we scrubbed, and on the second and third days we were followed around by a school of juvenile fish who were so curious about our activity and watched for anything of interest to devour. The creatures and I now have tiny cuts all over our knuckles from barnacles, but we finally have the algae smell off our bodies and are relieved to have the job done.

When we were in Panama several months ago, we found a tiny gecko on the boat that was about two inches long. Over the months we haven’t given it much thought, figuring it had crawled off while we were still in Panama. Today, while Mycah was busy at the stern she called Jude for help saying she just spotted the little guy – who has grown considerably, and had just jumped onto the dinghy. Jude followed him into the dinghy so he didn’t jump off and drown, and rescued him. Aidan has name him Drew and he is somewhere back on the boat.

Our Bahamian friend, Kayston, took us aboard his 80ft lobster boat and showed us how everything works. His is one of six owners of the boat, and the season begins in August. Spanish Wells brings in an average of a million pounds of lobster tails each season. He told us that the longest lobster tail he’s seen was about a foot long and weighed about 3 lbs. The Atlantic Lady can hold about 40 000 pounds of lobster tails. 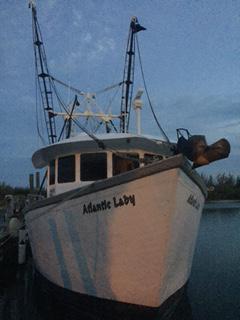 These huge arms are stabilizers and are lowered in moderate seas, and in heavy seas the stingrays (triangular shaped objects that look like anchors) are lowered to about 6ft below the water to stabilize the boat. 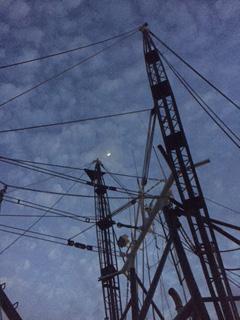 The galley is fairly large and had electric ovens. Lucky dogs! 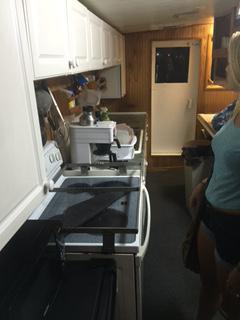 The berths are bunk beds separated by curtains for privacy.

The freezer is set at twenty below where the tails are hung in bags till frozen, then neatly stacked on the wooden boards. 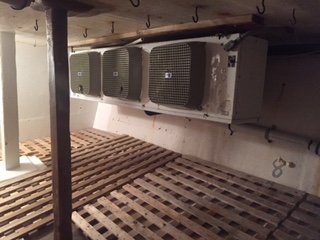 Atlantic lady has a giant engine and a fine looking helm station. 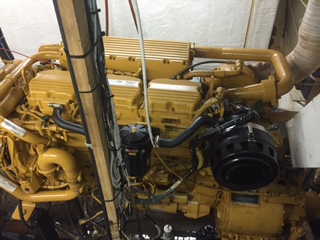 Three ‘scout’ boats accompany Atlantic Lady, and each morning the three boats leave with 2 crew per boat. One crew member descends on a hookah and checks the traps and collects lobster while the other grabs the lobster from the harvester down below. At the end of the day the three scout boats return to the Lady where everyone sleeps for the night till the following morning again. They are out for about 5-6 weeks at a time. We were fascinated by the tour of his boat and are so happy for him and his success.

Our time in Spanish Wells is coming to an end. We are hoping the creatures school text books will arrive tomorrow so that we can continue on to Exumas. It has been wonderful to explore these beautiful Islands and meet so many amazing people.