We pulled up anchor in George Town nice and early to get a good start on our journey from Exuma’s to Fort Lauderdale. Danny got both engines working and the generator seems to be doing fine when he tested it. We decided that we’d make the 58 mile crossing to Staniel Cay, and possibly spend the night there then continue on – depending on weather. Once we’d motored through the meandering shallows of the cut, it felt so good to be in the open ocean of the Atlantic, where depths were 2-3000ft, rather than 6-8ft. A gentle wind teased our sails and left us making slower progress than cold molasses on a cold winter morning. We finally pulled in to Staniel Cay around 6pm, and found a nice sandy spot to drop anchor, and as Danny had Tanda Malaika in perfect position, Emma went to drop, the anchor remained stuck in it’s holding place. After looking at it a second time we realized that the anchor was totally bent and Danny had to use his bounteous Basque strength to release it. Due to the way it was bent, it wouldn’t set in the sand, but instead it cut through the sand creating a fine trench for planting seeds! We quickly concluded that anchoring was out of the question, and we’d need to make a direct shot to a marina in Florida, where we will tie up at a dock. We are so puzzled with the bent anchor – having no idea how the hard steel mass got bent out of shape. (Maybe it was that darn barracuda!)
We sailed on, on the Caribbean side, and enjoyed a gorgeous sunset over the starboard side. 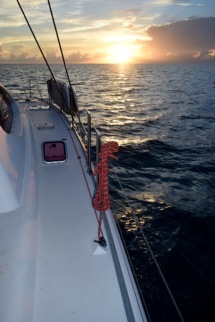 There’s just nothing like a sunset at sea. For dinner I made a couple of loaves of french bread and a big pot of Jambalaya.

We decided on our night watch schedule, and set our course through the shipping channel past Andros Island. Once we are past Andros, we’ll pass the Berry Islands and Bimini and on to Fort Lauderdale.

There was hardly any wind last night so progress was slow. By midday today we’d made 135 miles since leaving George Town, leaving about 160 to go. My night watch shirt began at 2am, and at that point I was so wide awake, so when Aidan and Jude came on a couple hours later i sent them back to bed and stayed on till 8am. I love night watch. It’s so peaceful and it’s during those times of silence and blackness that one really comes to know oneself. I find myself honestly assessing who I am as a wife, mother, daughter and individual, setting new goals and being prayerful.

At 8am i woke Aidan to take my place at the helm and went to sleep till 10am, waking to find the beautiful big spinnaker raised. I never tire or the sight. When airs are light and we are on a run, we raise the spinnaker – a giant splash of color and power. It took our speed from 2 knots to 6. The twins were at the helm and could be heard exclaiming in excitement each time they adjusted lines and picked up another half knot of speed. We are so proud of our little sailors. They have already learned so much and are so capable.

Through the morning everyone settled into their routines. Emma stayed at the helm and worked on her school work.

When Aidan was done, he got busy on chores which included cleaning his berth, and when he appeared with a sheet over his head I dared him to try make it around the entire deck with the sheet over his head without falling overboard. He accepted the challenge and did quite splendidly! Oh the goofy things we do on a crossing…

Jude relaxed reading her Sherlock Holmes book and Mycah attacked her berth with cleaners while Danny and I sat in each others arms out on the bow and breathed in the fresh air while enjoying each others company.
When we made our way back to the stern he decided to check one of the fishing lines, thinking we’d snagged some seaweed, and pulled a barracuda. 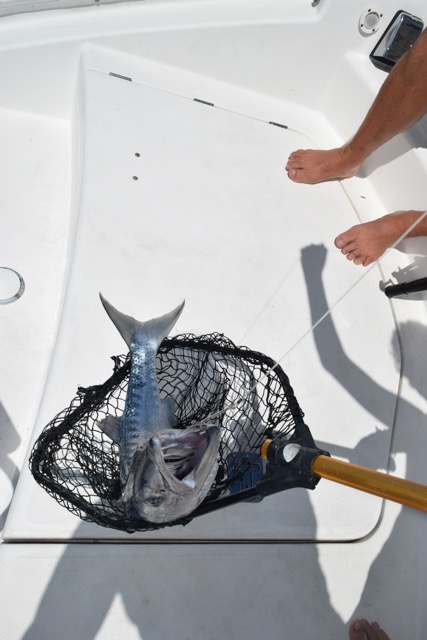 Our fishing friends from Freeport told us that sometimes they use barracuda as bait, so we decided to use this one for it. No sooner had we set the starboard line with the bait, had the rod bent over with another catch. He reeled in yet another barracuda, and this one we let go. 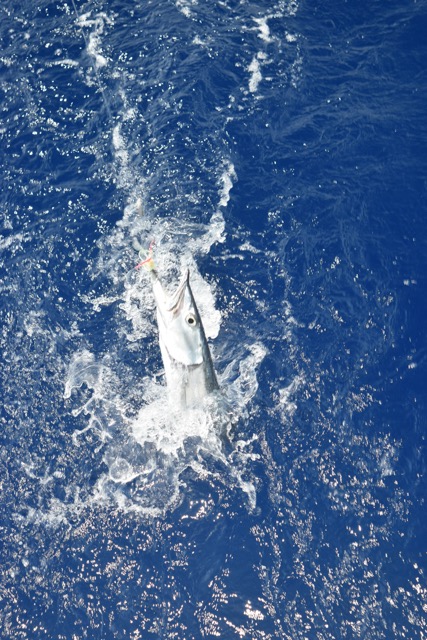 Just before I started making dinner, Danny reeled in a huge Mahi Mahi (Dorado). Before he was even done filleting the second side, I had a huge slab of it seasoned and on the grill. 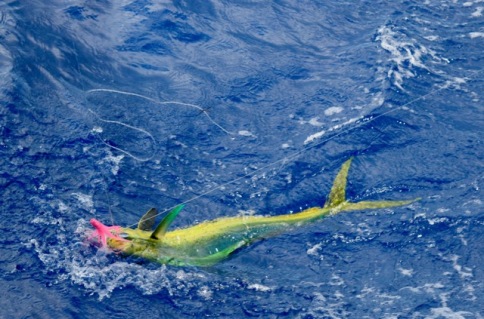 Our third day was a really hot day on the water. We were all tempted at different times to jump overboard for a refreshing swim, but stayed firmly on deck. By noon we had already caught 5 barracuda and released them back into the big blue. The craziest part of the day was when I heard the whiz of the fishing line, and went to grab the pole from the rod holder but couldn’t because it was so bent over. I called for Danny and he was able to wrestle it out and reeled in a beautiful young, feisty shark.

He was really mad, but Danny was able to get the hook from its jaw and set him free. He was so cute!
For dinner I served pasta salad, BBQ chicken and green beans. I also made macaroons for dessert. The crew really seemed to enjoy those.
After being at sea for about 300 nautical miles, we spotted Fort Lauderdale’s skyline. Large buildings stretched far across the horizon, which was a rather strange sight to behold after being on so many islands where no other soul was in sight, for 3 months. As we came closer to land and saw more details of the lights, concrete, and fast paced life, we felt even more grateful for the opportunity we’ve had thus far. 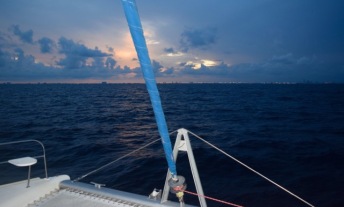 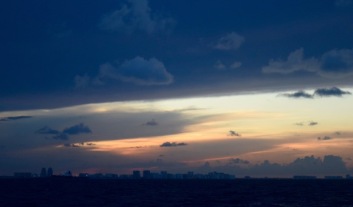 Danny did an amazing job maneuvering the boat through a maze of water ways, past many fancy vessels and backed us into our slip with catamarans on either side of us. His skills never cease to amaze us. Tonight we are tied to a dock, and have the AC going in the hulls, and are all ready for a good solid night of sleep with no interruptions for night watch.

4 thoughts on “Bahamas to Florida”

You guys are amazing!! Sure hope we get a chance to come on board and sail with you all for a few weeks this fall!!! Looking at October……

We can’t wait to have you on board Captain Elayne!

Darling thank you for all the details and beautiful photos of the trip. You guys are amazing. Just do not become too brave where sharks are concerned though. You never know when they will turn on you. I love all your experiences. I really miss thesting rays/ I just love them. It would be nice tosee a photo or two of you. :)) Love you all so much our Darlings. Love mammie

Thank you Mommy. We are cautious with sharks and give them a lot of respect. We love you so much.