Today we found out that we are Grandparents and didn’t even know it! In previous posts I mentioned a gecko that boarded our boat in Panama, who showed up while we were in Bahamas a few weeks back, and today we came across its baby! The Creatures have named him Gerard and we are so proud.

It was a busy day for us on Tanda Malaika. At 8am I walked over to the ‘Just Catamarans’ main office to chat with them about what all needs to be looked at on the boat. The secretary called a French gentleman named Laurent, who will be overseeing all the work done on our girl. He and I spent time together on Tanda Malaika going through everything, and discussed different possibilities. As soon as he left the creatures and I got busy scrubbing.

I climbed down into the engine rooms and worked hard to get them cleaned up. 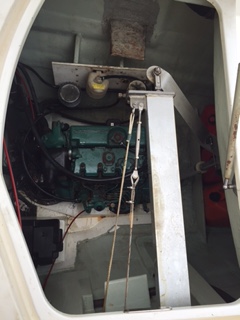 After that the diesel mechanic came and looked at the engines and generator. He said that he’s pretty sure the starter needs to be replaced on port (aside from sail drive seal), and the alternator and I think heat exchanger needs to be replaced on starboard. As far as the generator goes…I’m afraid that it’s time for a new one. The generator is such an important part of the boat, and this one has lasted beyond the expected hours by far. We may be able to get some money for it since it still runs, but as far as being reliable for us in the middle of no where with the demands we place on it – it’s just time for a replacement.

It appears that we will be hauled out on Wednesday, and at that point we will be homeless for about 10 days. Since Danny will be home from his trip about then, the Creatures and I will leave here on Wednesday morning and fly out west to empty our California storage unit and get some things done in Idaho. Aside from some organizing, we really need to sell our 2008 Road King Classic,

and our 2002 diesel Excursion. So if you know of anyone who would be interested…..

and of course, more importantly we are SO excited to see our family and friends, and it looks like one of our besties from St George will be joining us on the return.

Perhaps the most incredible part of our day (aside from being able to talk to my Sweetheart) was that for the first time in 7 months, we were able to attach our hose to a faucet on the dock and fill our water tanks with it. Do you realize how significant that is? Fresh, drinkable water is not to be taken for granted. So many don’t have it, and it truly is a most precious gift. We are so grateful.