One of the things we have had done on the boat while here in Fort Lauderdale, is had cushions made for the stern salon. It was fun a fun project which we did through ‘Creative Canvas’, which is a company I would highly recommend to anyone who needs work done. We picked out a taupe color because it is neutral and we could brighten it up with throw pillows. Mycah, our little designer, selected outdoor pillows from Pier 1 Imports. Here’s what it’s looking like: 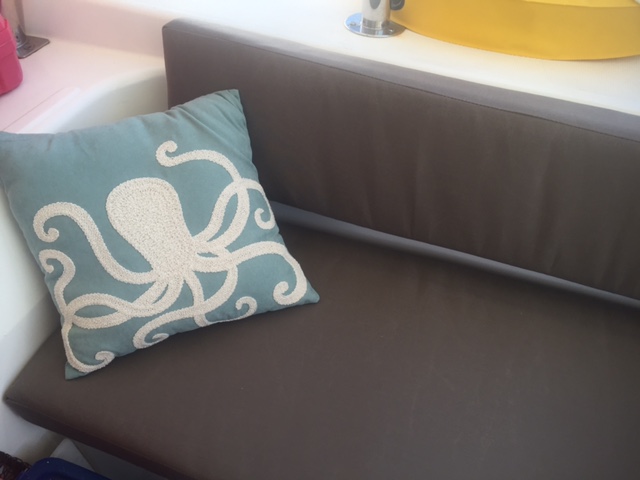 We also recovered the seat and backrest at the helm… 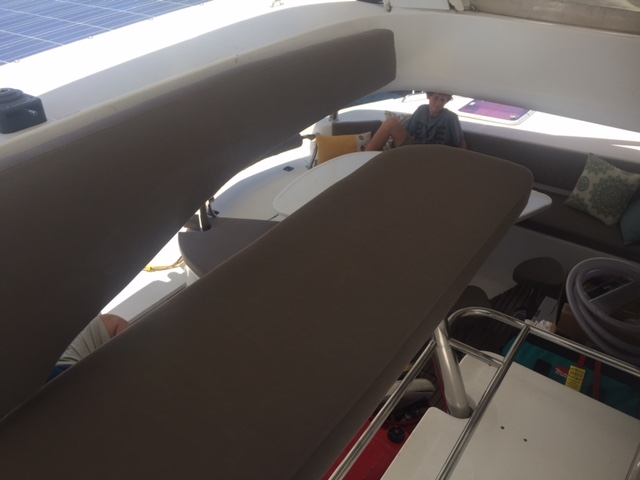 Vladamire from Creative Canvas did a fantastic job!

I decided to try make a lure, and though I need to make many improvements, I just know that this lure is going to catch us some fantastic fish!

Yesterday a gentleman stopped by to talk to Danny and when I looked out at them I had to do a double take. It looked like Danny had a twin lol 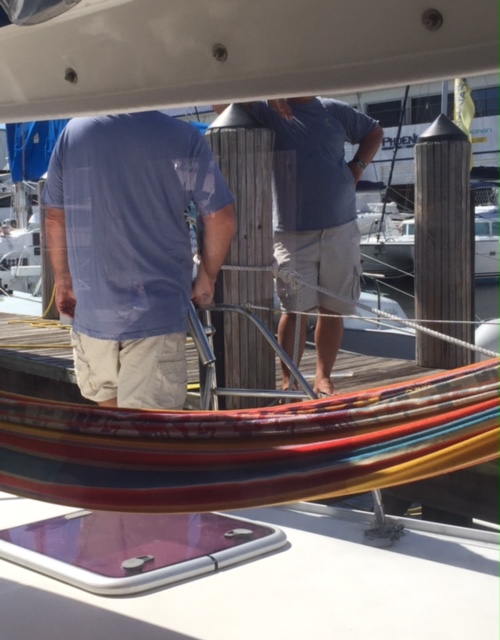 Danny got done repairing something in the generator room yesterday so today we will move everything back in and then the bow will be clutter free once more. We will also defrost and clean fridges and freezers and take inventory of what we have so we can start making a food provisioning list.

I went to use a spice while cooking and noticed this…

Jude is a jokester! She bought several plastic cockroaches and carefully places them around the boat to freak people out. After living in Hawaii where there are cockroaches big enough to carry a small child off, it still gives me the creeps!

As I’ve mentioned before, Danny and Mycah are constantly teasing each other, and yesterday just by chance I captured a photo that proves that they really do love each other!

We have a lot of love flying around this place!

We are so excited because our friends, the Nell’s will be here on Thursday morning. The grand adventure is about to begin. Before we know it they will be good little sailors. On Thursday evening Danny will be leaving on another work trip, so the rest of us will head to Bahamas without him and when he’s done he’ll meet us there.

The day has begun and we are off to work on more projects now. The final count down is on!

Love how everything turned out with the cushions! The colors and patterns are so perfect 😊

Hi Belinda I sent you a text but don’t know if you still have that number. Our son Dan is in Fort Lauderdale right now with his wife and said he’d like to touch base with you. He is an avid sailor and would love to do what you do when he retires. Is there a place or a number he could reach you. He’s only there for short time before he goes down to Key West. His number is 858-204-5444. His name is Dan Taylor his wife and Suzy. Happy sailing!!! Love ya Mary and Ron

Sent from my iPhone