Today has been a blast and a half. This morning we lounged around the boat for a while and then sat conversing on the stern. I was eating a mango, trying not to make a mess, when I saw what I thought was a young whale shark, off the port side of the boat. In my excitement, I yelled “shark’ as I sprinted across the stern deck from starboard to port, and flung myself in a graceful dive, with my swimsuit cover up still on, off and into the water. As I dove down I realized that everything was blurry and that I wasn’t wearing a mask, so I surfaced to ask someone to throw me one. Everyone had a look of confusion on their faces and I told them I saw a whale shark as they threw me the mask. I dove down once again and saw a large dark form in the distance and swam toward it to find it was a massive bull shark swimming away from me. I told the creatures to watch for it, and I swam out again trying to find it. When I couldn’t find it, I asked Jude to throw me a plastic water bottle, which I dove down with and squeezed it in my hands, causing it to make a crackling/crunching sound. This sounds like bones crushing to the sharks and they come in to investigate, and the bull shark did, and watched me from a distance then left once again. What a thrill it is to see these beautiful creatures in the sea.

We pulled up anchor and motored in to Bimini. Danny and I have texted back and forth and we’d looked on weather forecast apps, and it looked like a big storm is coming in on Tuesday and Wednesday. We thought the smartest thing to do would be to dock at a marina in Bimini – especially since we wanted to help Dan Zwerg (sailingthebahamas.com) and his crew with humanitarian work. The wind was blowing like crazy and Chad took the helm and like a ninja, docked us perfectly right where we wanted to be. It was right next to Dan’s boat.

The Creatures headed for the beach while Chad, Marci and I walked into town to take care of customs and immigration paperwork. Bimini is an interesting little town. Marci walked with the cutest little boy for a minute.

Being a big jeep fan, I love the police cars here.

$420 later we were done with all the check in paperwork and walked over to the beach to see if we could find the creatures. It was such a beautiful sight when we passed over the top of the hill and saw the paradise below us.

We walked along the beach and found tons of sea glass and shells. 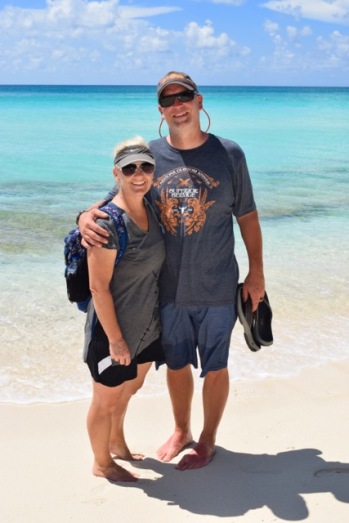 It wasn’t long before we found our sweet creatures, who were loving their beach time, so we joined them in the water.

When we finally walked back to the boat, Sierra and Emma sorted through their treasures at the stern table.

The rest of the afternoon and evening was spent relaxing, listening to Mycah and Sierra sing, and chatting with Dan, his lovely daughter, and their crew.

After dinner, the wind picked up and beautiful big cloud formations towered over us, so we figured it was time to prep the boat for the possible storms. Everything was tied down and stowed.

A full moon rose over the water, and creatures from Dan’s boat migrated over to interact.

It was so fun to listen to them converse, making each other laugh. What an amazing group of creatures! 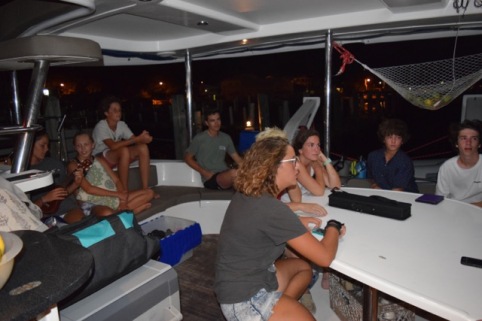 While they were all chatting I decided to run the bilge pumps, and found that the port side was not working. I opened up the floor boards to find a little more water than I’d like to see, and tried trouble shooting it to figure out what the problem was. Before long i had both Chad and Dan helping me, and they figured out that the bilge pump had died, which means I will need to purchase a new one tomorrow. 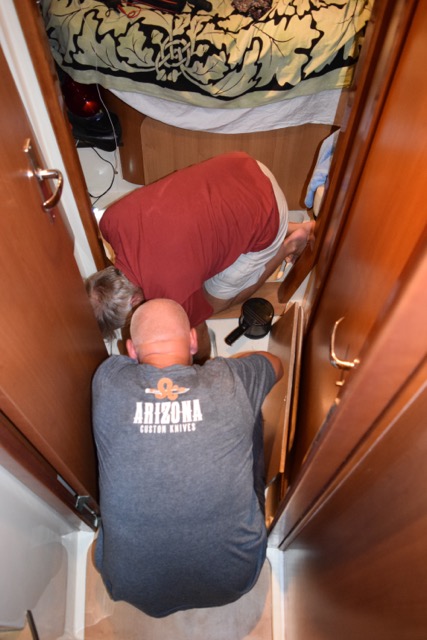 I am so grateful to Chad and Dan for their help. It is 2:15 am now and in 6 hours and 45 minutes we will be meeting Dan and his crew to go over to help them out. I’d best get some much needed beauty sleep!