Yesterday morning before we left Great Harbor Cay, Marci, Jude, Mycah and I set out to find a store for some produce. We drove the family car to the beach and pulled it up onto the sand in front of a place called The Beach Club.

The view from there is quite picturesque.

We walked out to the road and listened to the cicadas as we walked.

As a van approached I stuck my thumb out and a sweet guy with a crowded van that was barely running tried to see if he could give us a ride, but we thanked him and told him to go on. We could see we wouldn’t fit, and weren’t sure his van would make it much farther. The second vehicle was a jeep with a single lady named Gwen, and she happily gave us a ride all the way to the grocery store.
Though the shelves were fairly well stocked, their produce section wasn’t much at all. We did find some yucca, which is one of our favorites, and the best find of all was the Bahamian Ginger beer. We bought a case. Soon after beginning our hitch hike back, the woman who manages The Beach Club drove up and offered us a ride. When she heard we hadn’t found produce she took us to another store and waited out in her car for us. They had plenty of fruit, but it was ridiculously priced. Apples were $1.20 a piece, oranges 80 cents each, bananas $1.59 a pound. We picked up a couple things but decided that we didn’t need it that badly. Our friend drove us back to the dinghy, we said our goodbyes and I asked her her name as I thanked her. At first I wondered if she was joking, but she was totally serious. Her name is Malester. So unfortunate. She is 50 and looks so young!

We loaded in, pushed out and the girls went to start the dinghy with no success. After trying for a while we began rowing and Jude and Mycah switched off between the two of them for about 45 minutes. Periodically we would mess with the engine and still could not start it. Finally, Jude looked down and began laughing, realizing that we had forgotten to put the key in! We all felt like idiots and laughed at ourselves.

After reaching Tanda Malaika, we made our way to one of my favorite places on earth…Hoffmans Cay. It is part of the Berry Islands and about 12 nautical miles from where we were. Aidan swung from the bosuns chair and then him and Glade rode in the sail bag. 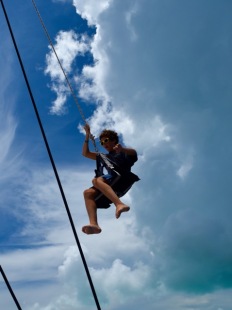 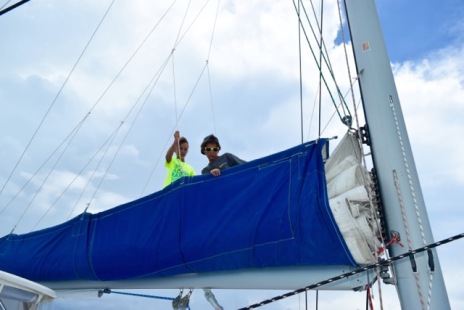 I had been talking to the Nell’s about how beautiful Hoffmans Cay is, and when we reached it they could clearly see why I love it so much.

We could see a storm approaching but jumped in and swam around for a bit first, and explored one of the surrounding islands. What a heavenly place!!!

After the lightening drew close enough we climbed back on board and closed things up. I checked the weather and it showed that the storm would bring 5” an hour. It really poured, and was so gorgeous.

When it let up a bit we grilled kabobs on the braai and ate baked potatoes with them. Marci made the most delicious Banana Cream Eclaire Cake. Most everyone watched Dodgeball before bed. It’s been another wonderful day. Danny is a day closer to coming home and life’s good.