We enjoyed a wonderful time at Hoffman’s Cay yesterday with our friends from Bimini. They arrived in the morning, and after getting settled we took them to the blue hole. All 10 of them loaded into their dinghy which was an interesting sight for us to behold, because we could finally see what we usually look like! It’s loaded, but tons of fun! 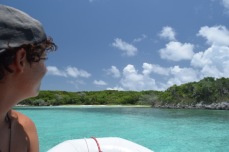 That endless calypso color of the water never ceases to amaze me.

Everyone thoroughly enjoyed the blue hole. Some jumped right away, some gained the courage a little later, some did flips and gainers, and we all had a wonderful relaxing time.

We even had a little synchronized swim session!

In the early evening we gathered on Tanda Malaika and they treated us to some delicious beans and rice. Afterward we explored White Cay for a short while as the sun began to set, and some of the creatures prepared some wood for a fire to roast marshmallows. The scene overlooking the little bay was so beautiful. 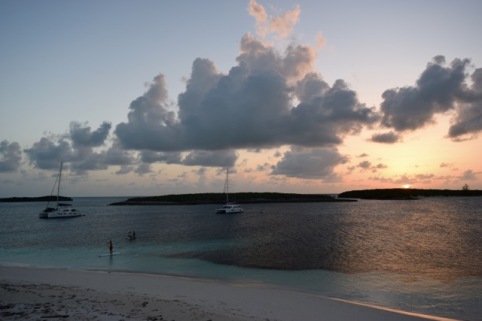 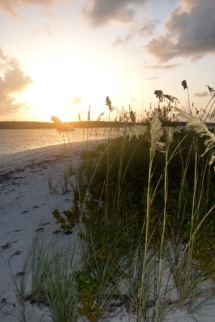 We came across some beautiful camouflaged little birds who sat so quietly on the rocks.

Everyone roasted marshmallows and used oreos and chocolate chip cookies in place of graham crackers.

We relaxed and chatted, and when the fire was out some of the creatures played night games. It was a wonderful time with Dan and his daughter, Danielle, and the rest of the crew. 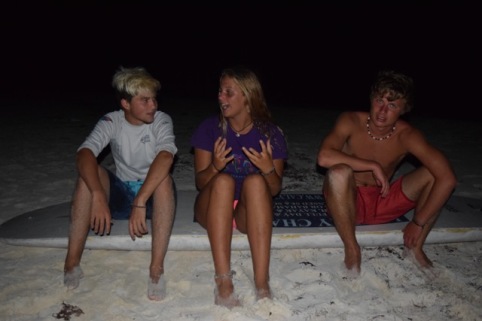 We said our good byes since they planned on leaving at 6am this morning, and retired our tired bodies.

This morning when I awoke I began prepping the boat to leave, and before long others other joined me as well, and it didn’t take much time before we were raising the main, setting the fishing lines and pointed in the right direction. Chad and Marci are becoming quite the skippers. They know the routines at this point and are so much help and fun on the boat.

As soon as we are underway, Glade falls asleep. He seems to be lulled by the motion of the ocean. A short ways into our sail the auto pilot stopped working for some reason, so we had to take turns manually manning the helm. It is good practice and it helps you appreciate the auto pilot much more.

Marci has used her ninja nursing skills several times now. The worst injury of all has been Sierras toe. She cut it on the swim step where it attaches to the boat, and sliced it down to the ligaments.

Mycah has been making the most beautiful necklaces from shells she finds on the beaches. She is planning on selling them.

We are so excited because Danny will finally be coming home tomorrow, It seems like he’s been gone for a lot longer than two weeks.