This morning we were so excited to get started on repairing Altagracia’s home and school. It had rained a little last night, so her floor had several puddles scattered around on it. 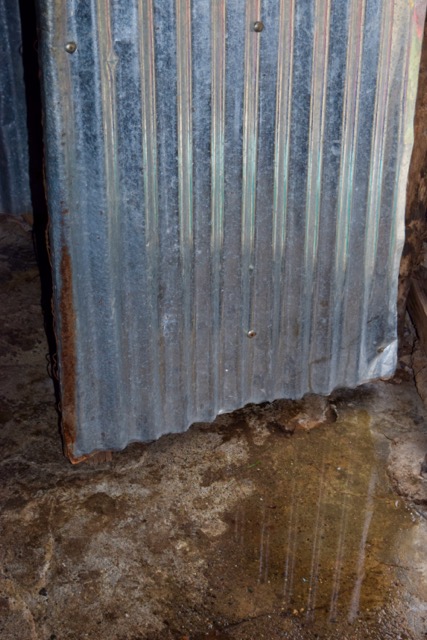 Allen,Reuben and his work partner climbed up on the roof and started pulling nails and the old sheets of metal off. 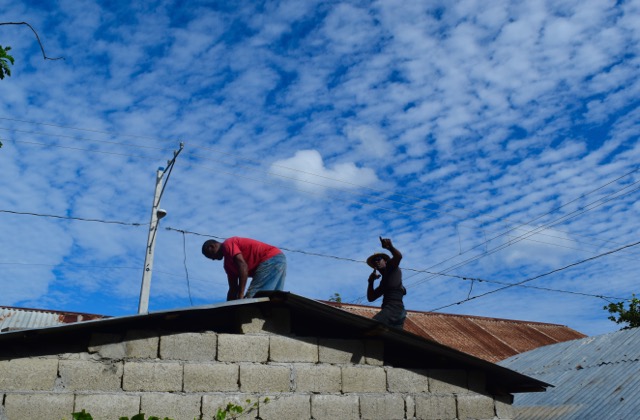 As the sheets came down we hauled them off and made a pile. 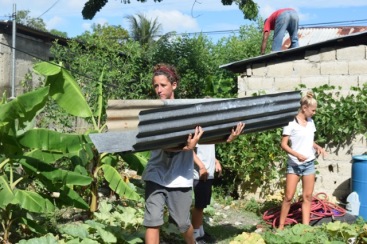 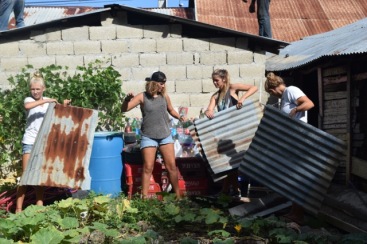 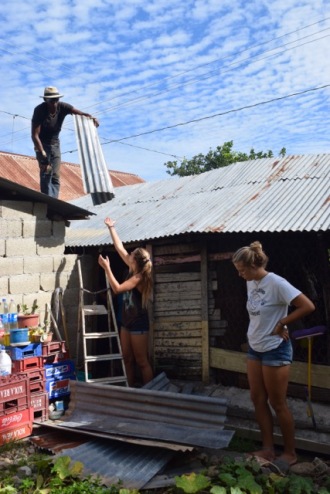 As lumber was removed, the creatures pulled the old nails out of the good pieces of wood so we could reuse them. 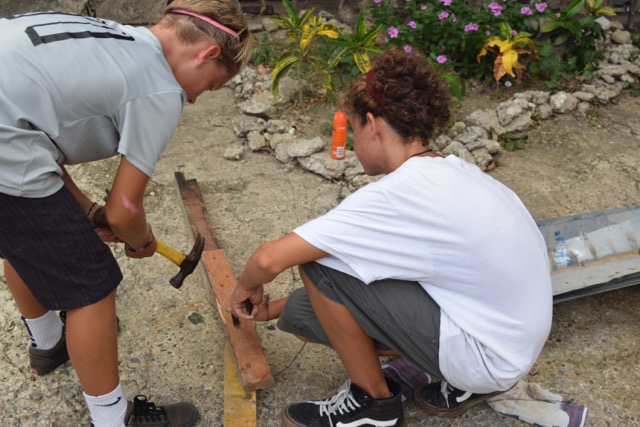 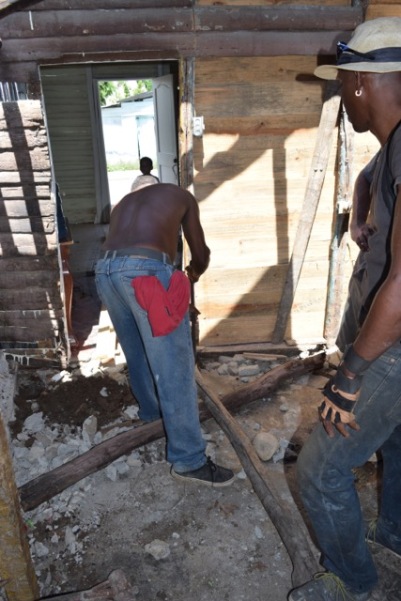 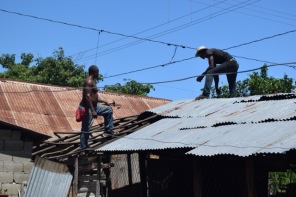 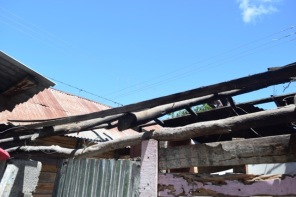 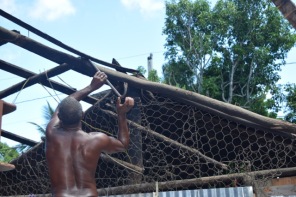 After talking with Reuben we found out that this home has been standing for almost 300 years (obviously with several repairs through that time), and has had 6 generations live in it.
We made several trips over to the lumber yard and hardware store for nails and wood. 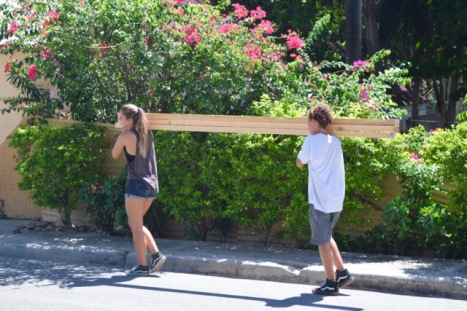 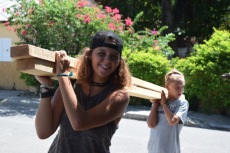 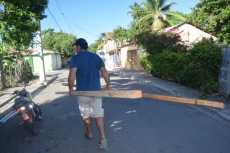 While pulling some beams down we realized that we will need to replace a wall separating Altagracia’s school room and kitchen. The wood was so rotten. So…that came down too! 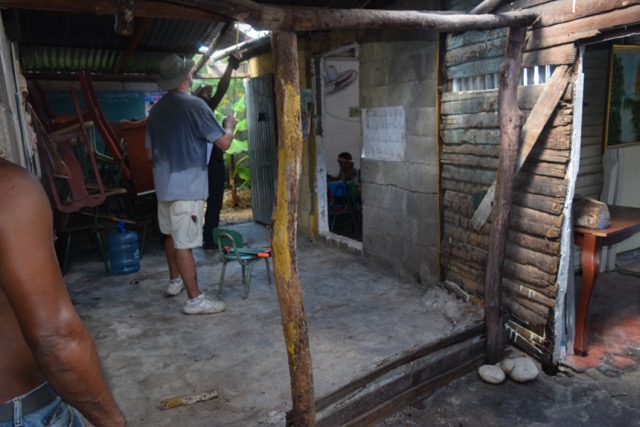 Altagracia was so sweet to bring us water, making sure we rested and hydrated. 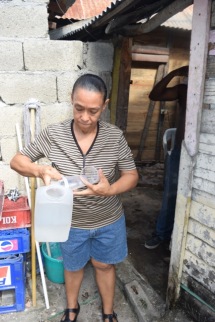 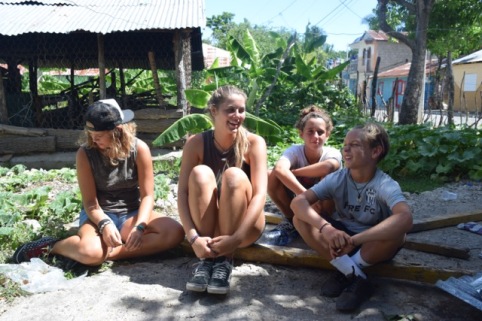 As the afternoon moved on, we began seeing some serious progress. 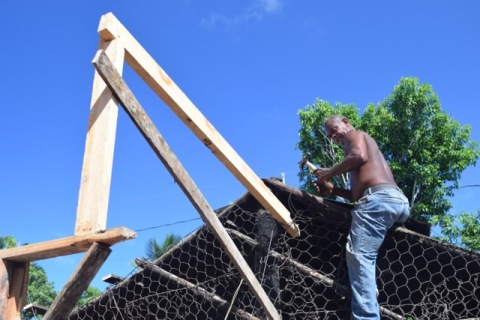 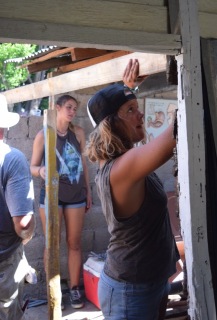 We noticed that Altagracia was gathering up every little splinter of wood to use as kindling when she cooks, so we kept a bag that we filled as we worked and cleaned. She also gathered all the old bent nails and wire and took some of them to a wall in her back yard when she was pushing them into the wall and securing the wire so her vegetable plants could climb them. Jude and I helped her with that. Waste not, want not… 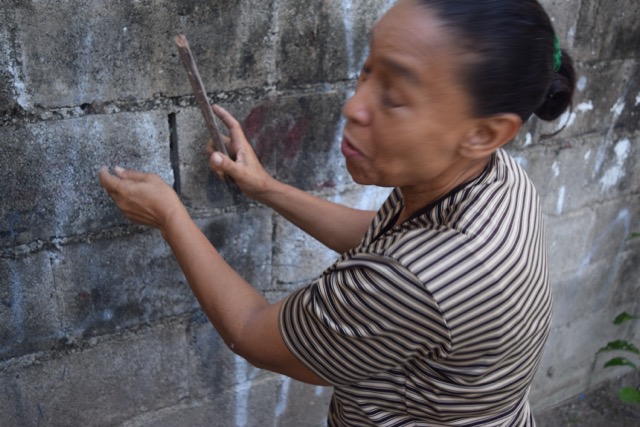 The concrete mix was delivered so we can start on the floors soon as well. 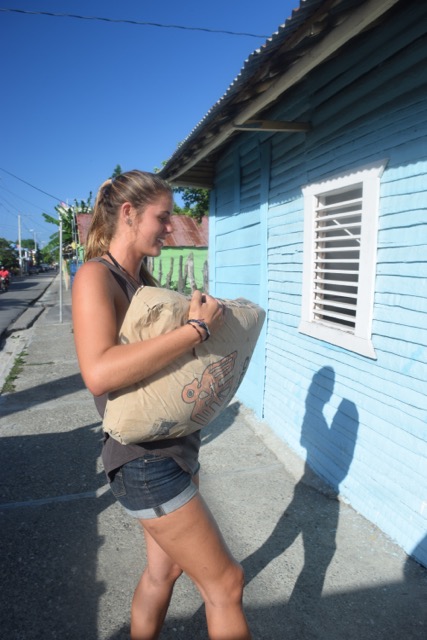 This evening when we finally left, we were so tired, but feel good about the progress we made today. 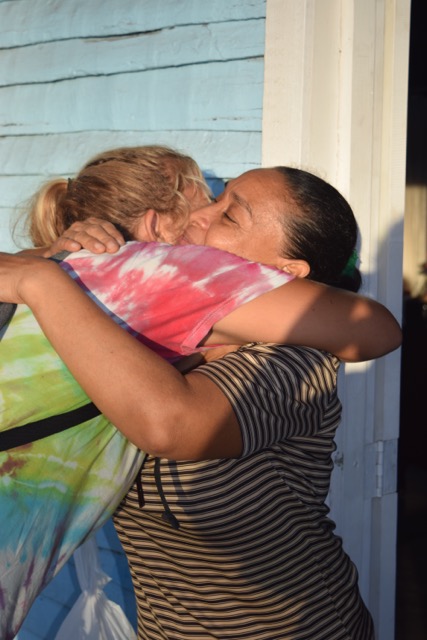 The roof is framed in and tomorrow we should be done with it and will begin on painting walls and possibly pouring the concrete floor. We piled our dirty bodies into the dinghy, looking forward to showers, a bite to eat and climbing into bed. 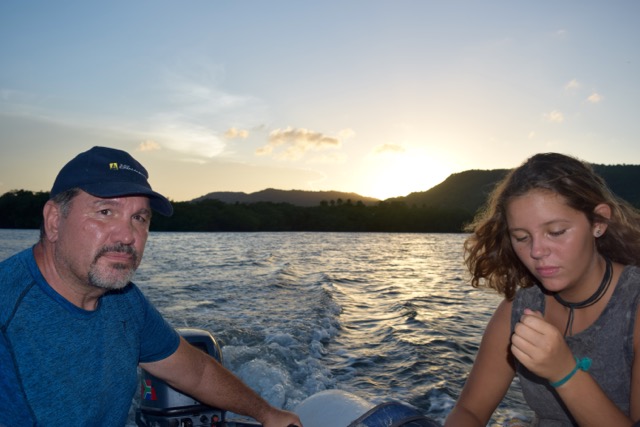 Tomorrow morning we will meet at 8am and continue on. What a wonderful day we’ve had!

Thank you Lorraine. It was good seeing you today.

I love every stinking one of you!!!!

We love you too and can’t wait to see you.

In the year 2016 there lived a very sweet gentle lady on the Island of the Dominican Republic, in a little village of Laperon. Her name was Altagracia. Her Mammie and Daddie never realized that they were holding an angel from heaven as they looked upon this dear little baby sent to them with jet black curly hair and big almond shaped black eyes. They loved this dear little girl our Lord had given them and they wanted the very best name for her and the most beautiful name too.

They thought and thought and they came up with the most beautiful name they could find. ALTAGRACIA. Yes! That would be her name. This name in Spanish and Latin meant High Grace.

As the years went by Altagracia, lived up to her name, High Grace. A gentle young lady, always smiling and looking out for who she could serve, for who she could cook a meal to fill their stomachs and make them smile too. Altagracia loved the under dog. She would put her arms around those who were left out and look at them with her big black eyes and a bright smile would flash beautiful pure white teeth. Soon those who were left out were happy and smiling too and their sadness forgotten.

These dear children who could not keep up with the schooling in the government schools were left behind and soon they were in the streets. Allta racia had an idea! She would teach them!!! Yes she would. Excited to spoke to their parents and Mammie and Daddie. Everyone was excited, She portioned off part of her home to teach them.

Altagracia loved her parents and she thought ito herself. “I have the best parents in the whole wide world. I am going to be the one who will provide a place for them to lay their head at night and feed them from my deliscious cooking so their bellies will always be filled. I will be the one who will keep them from the storms outside, warm and dry.

Mammie amd Daddie became older and older and so did their safe home, they loved so much. Soon, slowly but surely drops started to gather on the cement floor. As many containers that they had soon was put out to try stop the rain. There was hardly a place that was not dry enough in the rainy seasons. The cement through 300 years of wear and tear began to crumble.

Altagrace had a special Faith in her Lord. she spoke to Him and and told Him of all her troubles. The Lord Loved Altagracia very much and He worked a plane. He has helpers all over the world, He knew there was a special family that lived in a boat that looked like a turtle that floated upon the sea, looking out for special people whose hearts they could touch and whose fears they could calm, and whose hands they would fill and whose knees they could strengthen and give hope to.

The lord looked down upon this family who were coming towards the Dominican Republic. He pointed His finger and touched each one of their hearts , and filled them with compassion and touched their eyes and opened them to see and know……. to find a lady of High Grace named Altagracia.

The one day, Altagracia, looked to wards the ocean and saw this white boat that looked like a turtle upon the water coming toward her area. The Lord touched Altagracia’s heart to know that these people would come and change her heart and make her smile very much brighter for ages to come. For generations from her and her village they would pass down the story of the family who rode the waters on a white turle boat to come and change Altagracia the Lady of High Grace’s life for the better. and this too would change the whole village to be more kinder and more helpful down the generations to follow……………….