This morning we set sail for Isla Guilligan.

Even though Hurricane Matthew has past, we still feel the effects of it. Before long into our sail, winds were around 31 knots and some swells were around 10 ft. The sky was a gorgeous grey and the ocean a brilliant turquoise. What a combination!

After about 10 nm, we arrived at Guilligan’s Island. There’s not much on the island itself, but the beautiful clear bay there is a wonderful place to snorkel around.

The sea grass was thick and rich…a turtles dream buffet, and I came across a beautiful little sea anemone and found tons of operculum, which are usually difficult to find.

An Operculum is a small ‘lid’ found in gastropods that closes the opening of the shell when the creature has retracted, which protects the soft body. They are hard like a shell and have a beautiful spiral pattern on one side. We collected a couple hundred of them.
When we returned to Tanda Malaika, we played for a few minutes, then began our 15 nm voyage to Ponce.

While en route we dyed Emma’s hair purple. Due to our amphibious lifestyle, it will wash out quickly, but it’s pretty while it lasts.

We passed by several beautiful shorelines and islands, one of which had a light house on it. The scene was so picturesque. 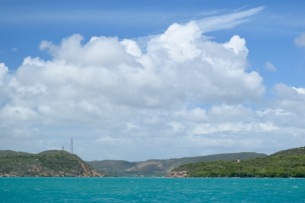 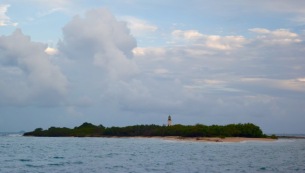 At sunset we anchored in Ponce. Music was playing loudly from someplace on shore, and yellow lights glowed from the boardwalk. We’ll call this home for tonight, and tomorrow continue on after exploring for a short while. It is Gabriel and my Mom’s birthdays tomorrow, so South African pancakes are in order!