It was formerly a US Military base called Fort Sherman.

Operating as a marina since 2005, it has become a popular spot for cruisers preparing to go through the Panama Canal. One can also enjoy the two thousand acres of tropical rainforest, filled with Howler monkeys, sloths, jaguars and a huge variety of birds.

The marina itself has a pool, a small gym and many activities for its occupants.

Morning group walks, water aerobics, movie nights, karaoke and weekly potlucks are some of the activities planned, and it’s all free of charge.
Mycah has been feeling ill the last few days, with huge tonsils, a sore throat and lots of fevers. Even though the rest of us have been roasting during the 90 degree days, she had herself wrapped in a blanket and still feeling cold.

Finally today she was back to her sassy self and feeling a little weak but mostly good.
We found a huge beetle that was on it’s back and couldn’t flip over, so the creatures flipped it and I played with it for a bit before they set it free. Such a beautiful little guy.

Yesterday morning I sat watching the crocodiles on the bank by our boat. The are such lazy fellas. Later in the morning the mechanic named Greg, stopped by to peak at the engines.

After checking them out he asked us if we could put the prop back on the problem engine so he could listen to it, so Danny told him he’d dive down and put it on. There was no way I was going to let him go in alone, so we decided that while he was installing the prop, I’d be in the water behind him watching for crocs. Before stepping in I glanced over toward the bank to see how many were watching, and they were all gone. (I assumed into the water since it was the hot part of the day.) While we were in I watched for movement, but the water was so murky that we only had about 3 ft of visibility down below. Nevertheless, I was ready with my Jackie Chan moves. What a thrill.

This morning I went on a beautiful walk.

Overgrown roads lead into the rainforest, where the air is thick with humidity and filled with the sounds of Howler monkeys, toucans and parrots.

It’s such a beautiful place. Vines hang down through dense foliage and termite mounds rest in thick black balls on tree limbs. Undergrowth covers the forest floor in bushes and vines that climb high toward the sunlight which streams in between large leaves. The color of flowers stand out against the greens, glowing in the humidity. 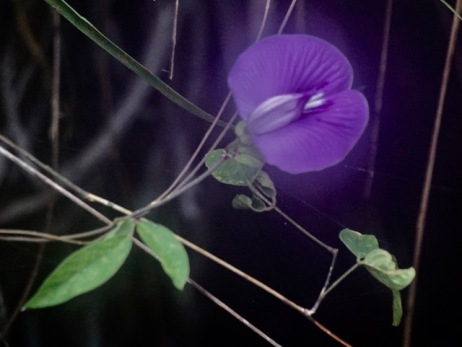 I love the assortment of shapes, textures and sizes of leaves, and I especially love to see the sunlight shining through them.

What a magical place! 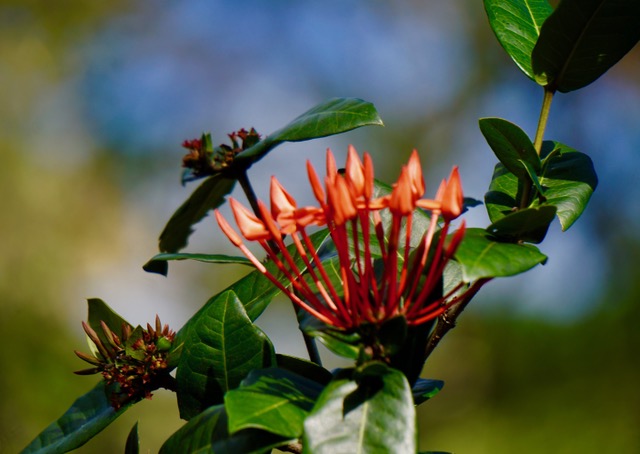 When I returned to Tanda Malaika we pulled up the stern floor boards and scrubbed for a while, then took down the sails so we could take them in to the sail loft for repairs.

One doesn’t realize the weight of the sails till they are down and we are folding them up.

The creatures were so sweet to wheel them to the sail loft in a cart for us.

Tomorrow a couple of us will catch the shuttle in to town to grocery shop and find a post office. We are so grateful for our freedom and for the love we feel for each other.