Today we met up with our friends who are on their boat, Zatara, and began our sail to Ecuador. As we made our way to where we were to meet up, we were once again greeted by breeching rays, and also whales.

As we moved along, we caught a beautiful big red snapper, and Danny filleted it at the stern. What a gorgeous fish.

In one particular area there were so many whales all around us, so we stopped for a while to watch and listen. The creatures grabbed their masks and slipped into the water to see if they could see them from below, but quickly realized that visibility was extremely poor. As a group they drifted slowly with the current and watched below. Kiffin had decided it was not her cup of tea, so she stayed on board to take pictures. I had warned the creatures that without doubt, where there are whales, there are sharks, so they needed to be alert. About 10 minutes into this adventure, the creatures were about 100ft from Tanda Malaika, and I heard Emma yell “shark, big shark, and it’s circling!” Kiffin and I ran over to yell back to them, expecting Danny, who was at the helm, to turn the engines on and go to them, but he didn’t. When the kids saw we weren’t coming, they panicked and yelled once more that the shark (a large hammerhead) was coming back. They had instantly linked arms in a circle so they were all facing out and looking down, and had pulled their fins up so no appendages were dangling, and Aidan’s first thought was to tell his sisters that he loved them. He’s such a sweet brother. In the mean time I had yelled to Danny, who had been oblivious to all that had gone on, and he quickly started Tanda Malaika and moved over to where the kids were. When Aidan had seen how scared his sisters were, he took control and told them, ‘“here’s what we’re going to do, when we get to the boat lets get up in pairs.” Jude and Mycah showed the twins how much they loved them by allowing them to board first, and soon everyone was safely on board. Two important lessons were learned.
1. Don’t enter the water right after cleaning a fish off the back.
2. Don’t enter when visibility is so poor.

We continued watching whales for a while, listening to them exhale as they surfaced, spraying a cloud of krill flavored mist into the air.

Before long we met up with Zatara. We rafted up to there boat so we could help them attach and raise their new sail. 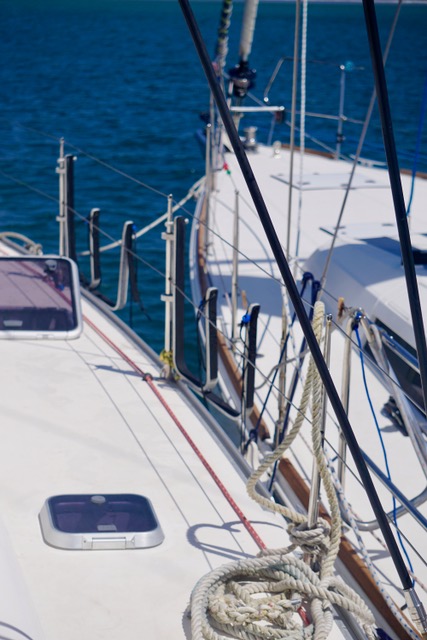 Everyone swam and explored for a little while, enjoying the feeling of sand between our toes for the last time for a few days before setting out.
It felt good to raise the sails and set our course. According to the weather report, winds were going to be light, so we set the fishing lines and enjoyed the breeze. Pelicans gliding just above the water, flying fish taking flight in and out of the waves, and frigate birds overhead like huge pterodactyls, escorted us out to sea.

We caught a couple of tuna, and once filleted, placed them in the freezer. They were bigger than they look in the picture. Really! 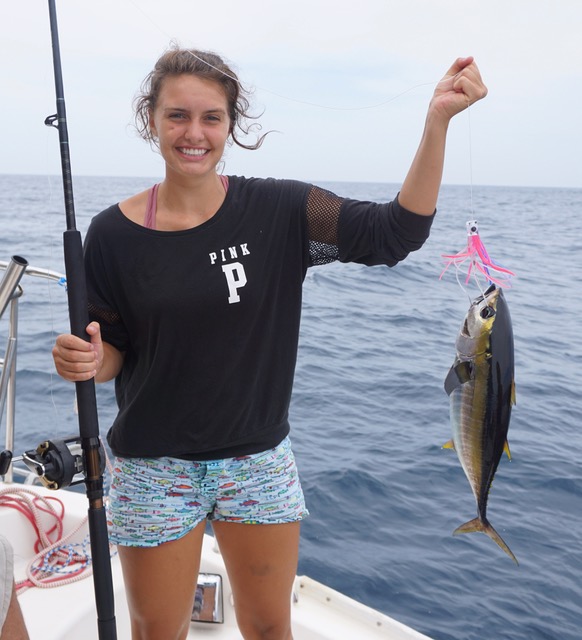 As dusk approached, we were greeted by a beautiful pod of bottlenose dolphins.

Everyone moved to the bow and watched them play for about 45 minutes.

Kiffin kept exclaiming that she was in love. Even though the rest of us have seen this many times, we never tire of it. It’s perfectly magical every time.

The sky soon turned yellow, and a dampness filled the air.

Today we enjoyed another gorgeous day at sea. The ocean was so calm and yet we had enough wind to keep us going at a comfortable pace. Every once in a while I’ll see a solitary shark fin surface for a few seconds, then disappear once again into the deep. We’ve also had more bow riding dolphins. I love knowing that there’s so much life beneath us.

It’s been really fun to buddy boat with Zatara. Keith and Rene Whitaker are wonderful people from Texas and Montana, who have four sweet kids, Anna, Jake, Fin and Kate. Check them out on YouTube at sailingzatara. As we have passed through pirate waters, it has felt safer being with a buddy boat, and I know especially when we sail Ecuador to Galapagos where more pirate issues have occurred, we will appreciate the company. 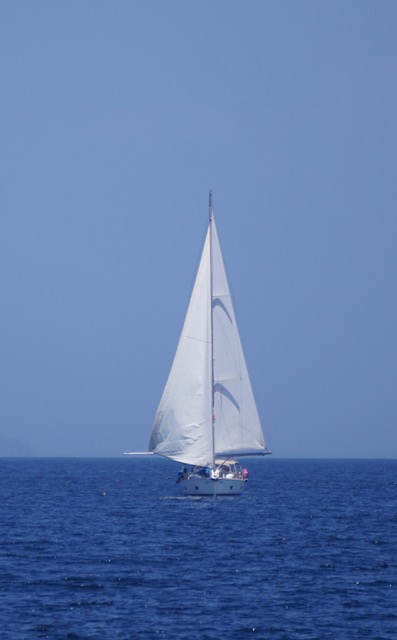 This afternoon Danny caught a huge beautiful Dorado, and as he brought it to the boat, it flopped up the stairs, sending Emma running for dear life, screaming with the net in hand, then it flopped back in and just as Jude was about to gaff it, it shook loose and swam away. Ah well, there are many, many more fish in the sea.

The sunset this evening was exceptionally beautiful!

We are rapidly losing our wind. According to the passageweather.com, we’ll be completely windless from here on out. After a little sailing in the morning it was time to fire up one of the engine and motor until we could find wind once again.

The ocean is so calm, that Jude made South African pancakes and we put the bag on the end of our boat hook and handed it over to Zartara when they came close. They have a a wonderful gift bag with shirts and hats in it. Jake and Anna from Zatara wanted to come over and hang with the creatures for a bit, so Danny held our course perfectly while Zatara inched closer and the two kids hopped aboard for a while.

The most magical thing happened this evening!!! Right at sunset we saw pod of pilot whales slowly making their way through the water up ahead of us. As they raised to the surface, their bodies looked thick, heavy and black and yet their movement was so light and graceful. 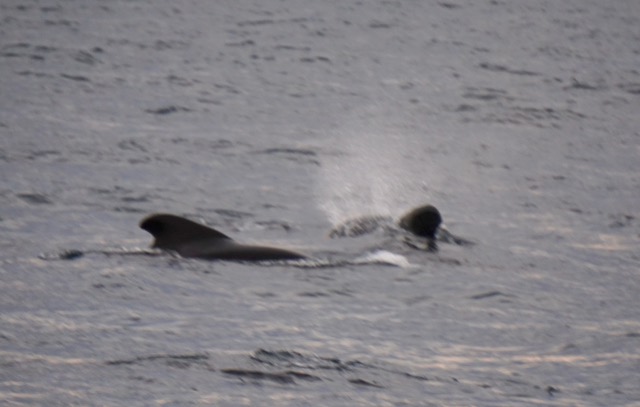 I immediately ran to the grab my GoPro, mask and fins, and told the family I was going in. Pretty soon all the creatures except Kiffin joined me (Emma had a death grip on my hand), and we swam out to the pod. Immediately six from the pod came up infant of Emma and I, and one of them turned its head, looked us in the eyes, then turned and continued on. Emma raised her head out of the water and squealed, “I’m swimming with whales!!!”

I love sharing these experiences with my family. I can just imagine when they are old and have their grandchildren in their arms, telling them stories of when they swam with whales out in the Pacific… 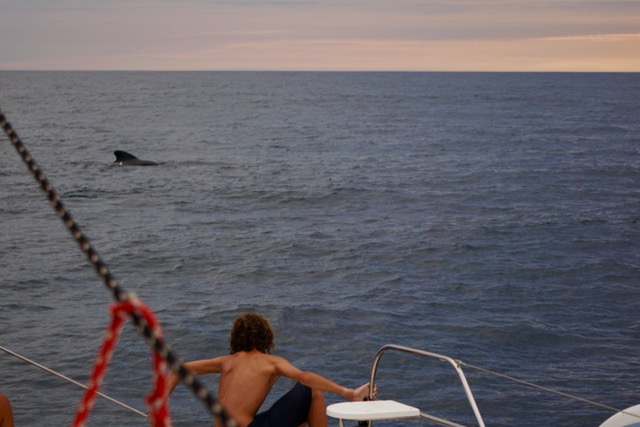 We didn’t catch one fish today, even though we trolled from sunrise to sunset. I think that the Dorado that got away has gone and warned everybody!

We covered about 150 nm once again.

On my night watch last night I listened to some interesting podcasts. Radiolab has some interesting stuff.
We have no wind once again today so the ocean looks like a giant lake.
One of the major accomplishments for a sailor, is to cross the equator, and this morning at 8am we reached it. We stopped the boats and rafted them together, Danny dressed up like King Neptune and read to us from “Old man and the sea,” and we all had to take part in the traditional act of swimming around the boats naked. All the guys went down below while us girls did it, then when we were dressed the guys came out and did the same. 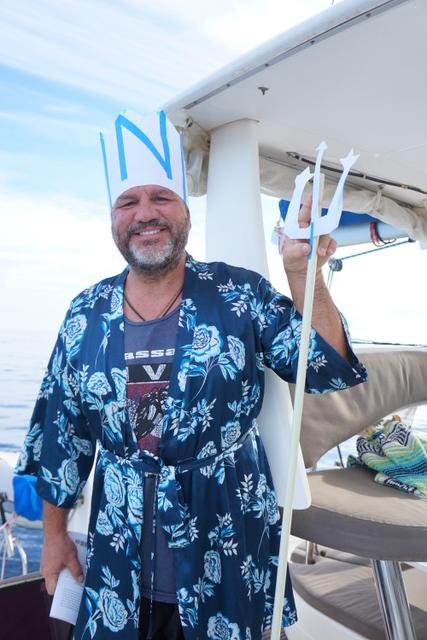 Luckily no one got stung by jelly fish in their nakedness, and after our little ritual we continued on until we were 15 miles from our destination to wait for the tide to change. No vessels can enter the mooring field except at high tide, so we had a Dorado BBQ, pasta salad and baked beans. What a feast. Keith did an amazing job grilling some of the huge Dorado he caught.
The coast of Ecuador is beautiful.

Everyone had a relaxing time and cooled off in the water.

Even the pickle enjoyed cooling off.

We feel like we made really good time considering our low winds, reaching our destination 600nm away in 4 days. We are now in the Southern Hemisphere and in the South Pacific!!!

3 thoughts on “Sailing to Ecuador”

I was fortunate to be on a new aircraft carrier when it crossed the zero-zero point. Lol, there were no naked swimming but, a lot of moving in line on hands and knees waiting to be waked on the bottom with short strips of fire hoses, then compition with another to blow salty water out if tie points for aircrafts. Then jump into troghs of very nasty left over food . . Yuck! At the end we all received certification of being double shell- backs.
There were threats of being abused in other ways but fortunately that! Never happened lol!
It would have been awesome to experience your version of the shell- back experience however at one point, the whales and all living creatures would have been emotionally harmed by my passage without clothes! Lol.
John S Lindsey- 🙂

This is another WONDERFUL blog!! What an exciting life you’re giving the kids! It does scare me half to death to hear about sharks and pirates. Please be safe…lots of people, out here in our boring lives, love you all so much!   Mom

Thank you Mom. We love you so much and are being safe. Angels surround us.