We’ve had a busy couple of days here in Ecuador.Danny seems to have hurt his knee somehow, and has been limping around with some sharp pains at the top part of his knee cap. I secured it with an Ace wrap and iced it, but it has not helped much. Yesterday when we had to make our way over to the vaccination clinic for yellow fever shots, we put Danny in a tak tak so he could rest it. 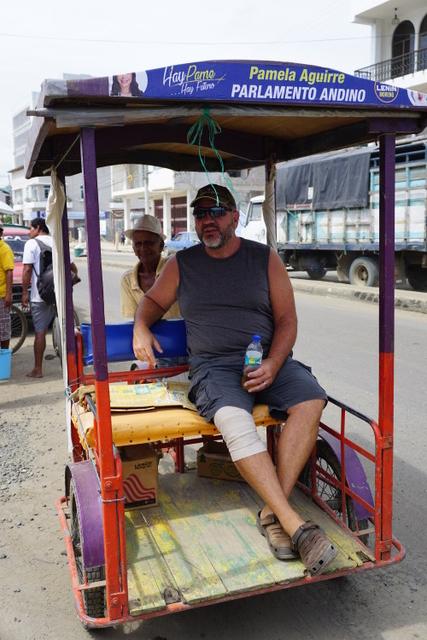 I asked the gentleman peddling to sit next to Danny and I would peddle them both, but he wouldn’t do it.
We were told by the doctor who boarded our boat with customs when we first arrived, that we had to be current on yellow fever shots to go to Galapagos, but have since then been told by the guy overseeing the Galapagos paper work that we don’t need it. We decided just to be safe, we’d go ahead and get it done. 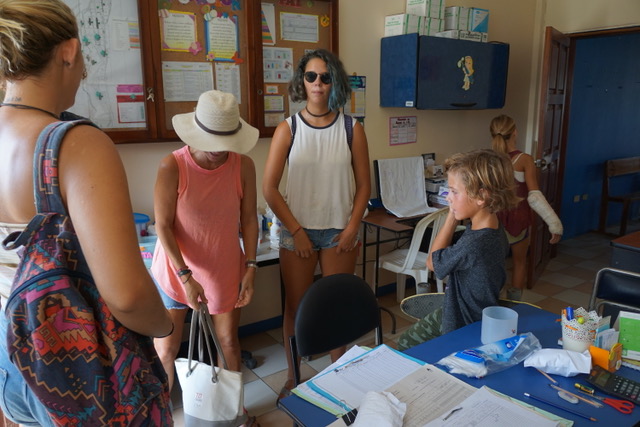 Emma and Mycah have never been ok with needles, but both did beautifully. Mycah convinced herself that all would be well and she would feel no pain, and that’s exactly what happened. Emma squeezed the blood from my hand, and was such a trooper. 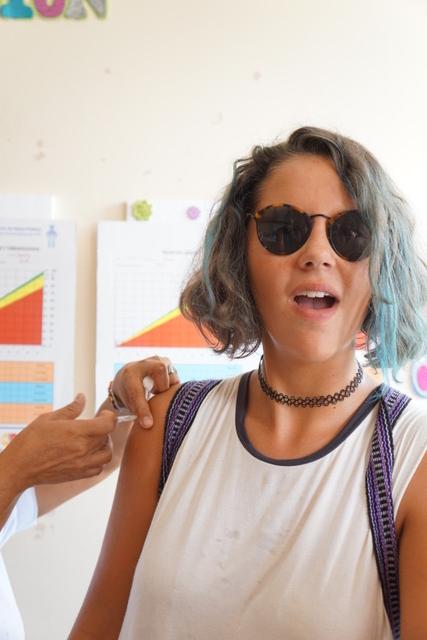 Keith and Rene from Zatara were well behaved too! 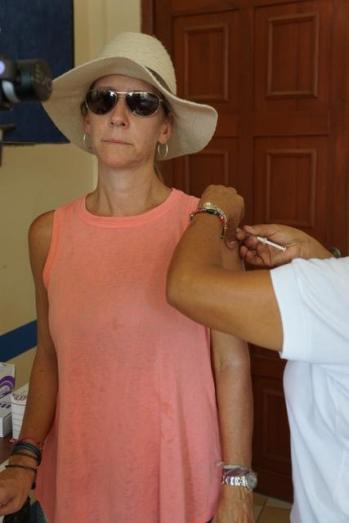 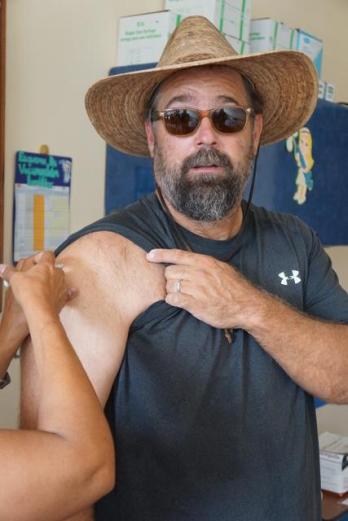 Aidan was so sweet, as soon as Emma was done he gave her a flower. 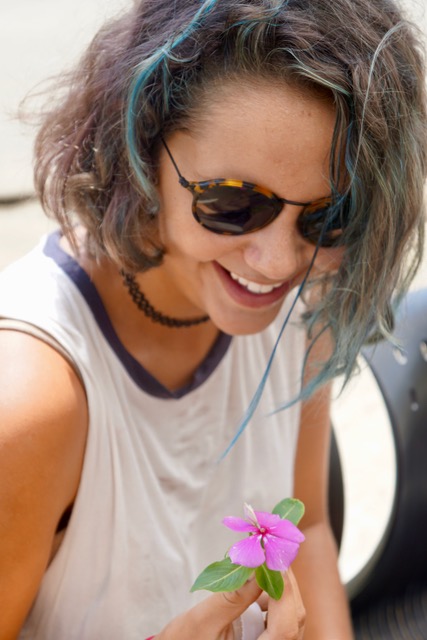 On our walk back we stopped by a park so the creatures could show us their ninja balancing skills on the see -saw. 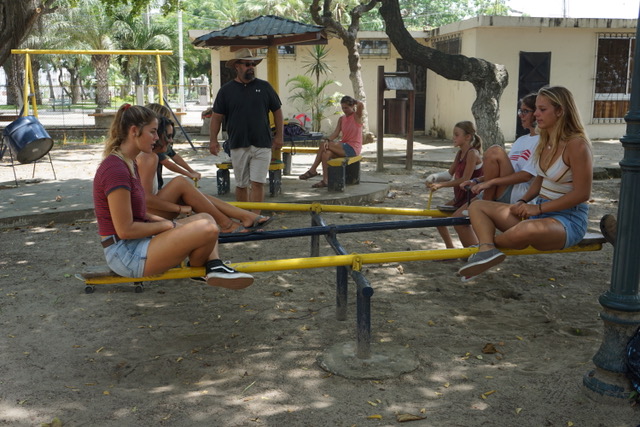 Of course Danny and Keith were instant Pro’s too!!! 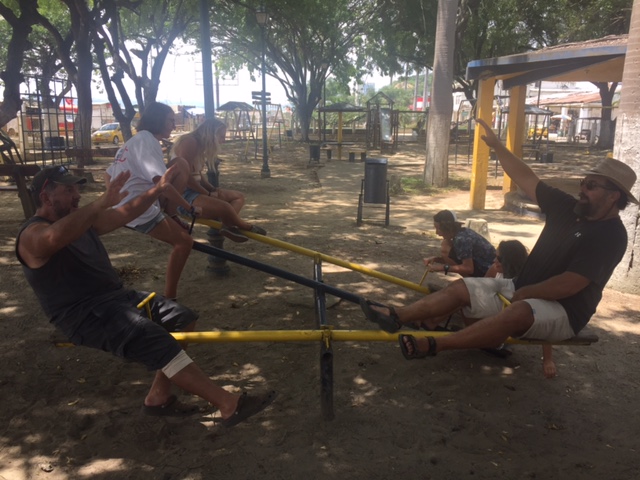 After that we stopped for ice cream, and then lunch. A curious bird watch us closely from the waters edge as we walked passed. 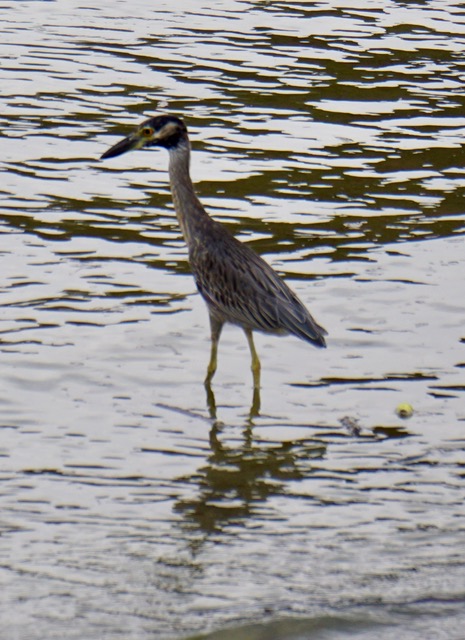 This morning Danny stayed home so he could rest his leg, while the rest of us made our way over the the creatures surf lessons. Emma was ready to tackle any wave she came across. 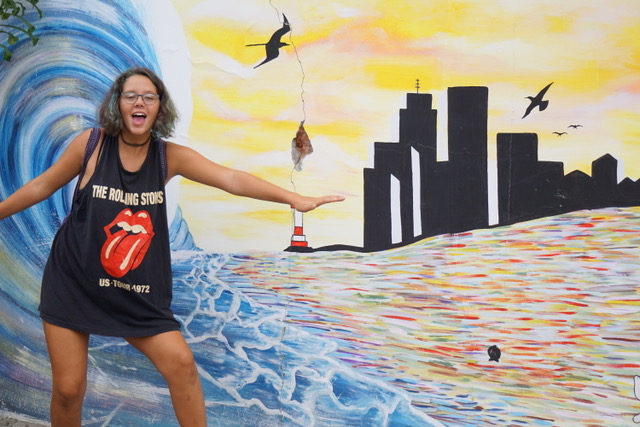 Jude climbed on the tandem with the surf instructor, and we followed them to his home to pick up the boards. 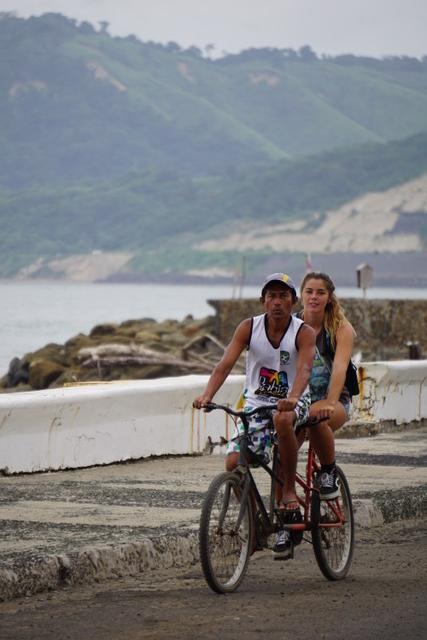 Several homemade looking boards were brought out from the house and neatly arranged out in front. 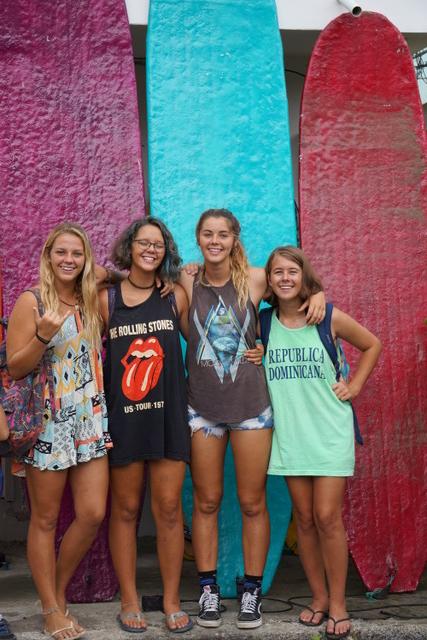 After that they were stacked onto a tak tak and everyone made their way to the beach a block away. 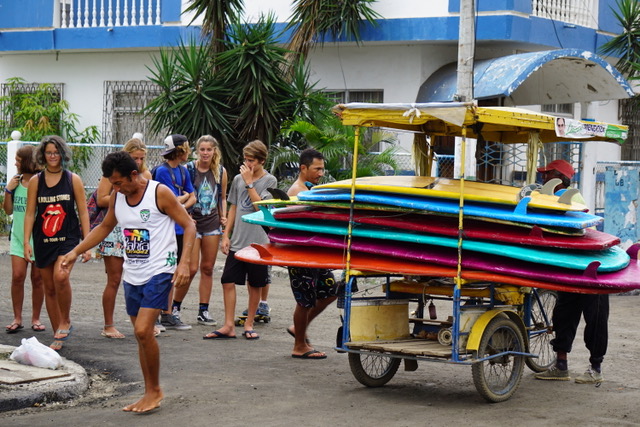 Jude and I eyed out the balancing bundle and the old man who was to peddle the load, and decided to stay and help him. 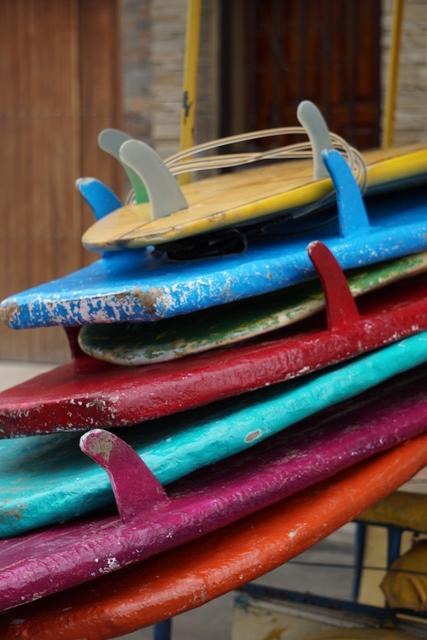 It was a good thing, because we had to stop and push hard to get over some bumps from construction in the road. 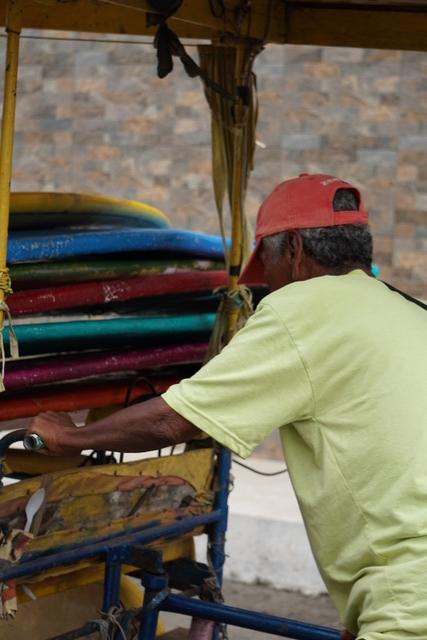 At the beach, the creatures were so excited to get started. 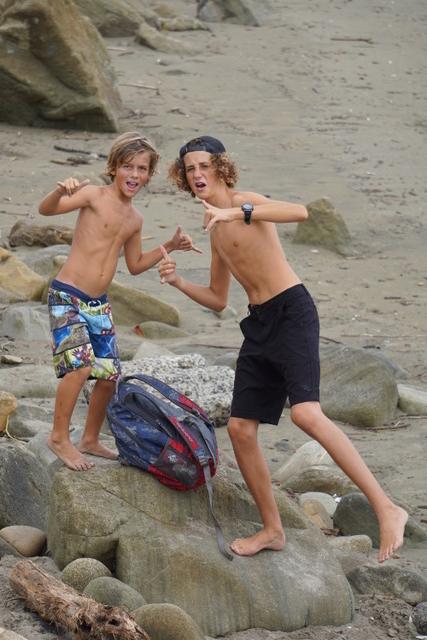 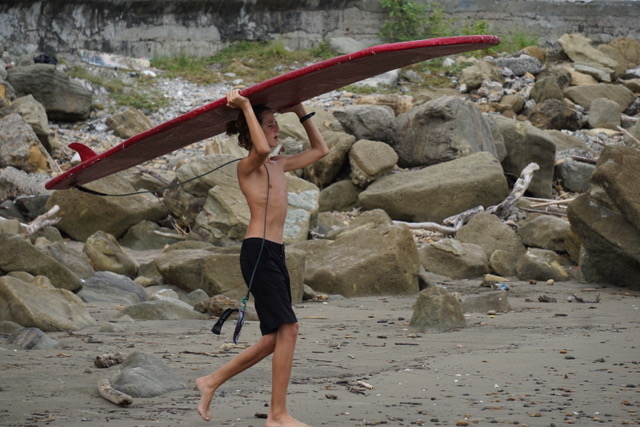 and before long they were all nicely arranged and ready for action. 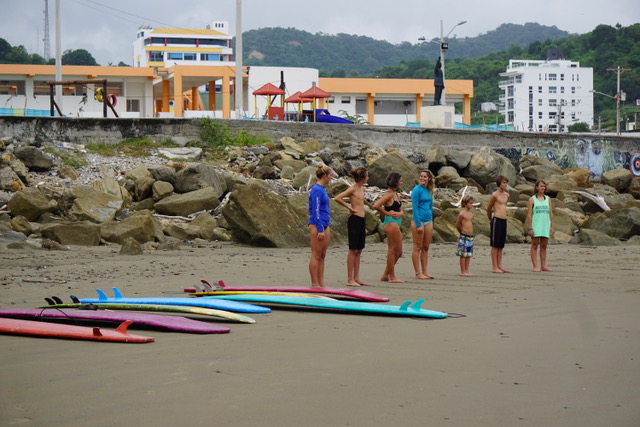 After some exercises in the sand, the creatures grabbed their assigned boards and took off behind the instructor into the ocean. 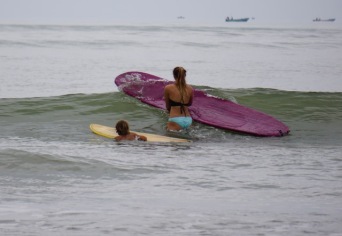 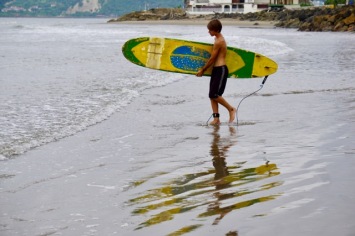 They each took turns being taught and pushed along. The waves were small and perfect for learning. Jude got up on her first try! 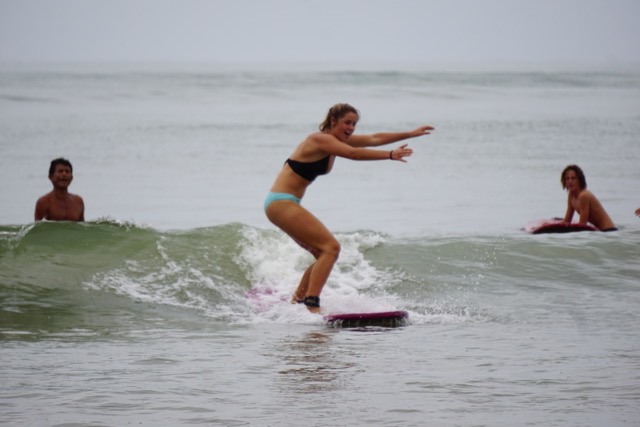 All the creatures got stung by jellies, but ignored them and had a blast and a half. Aidan is a natural. 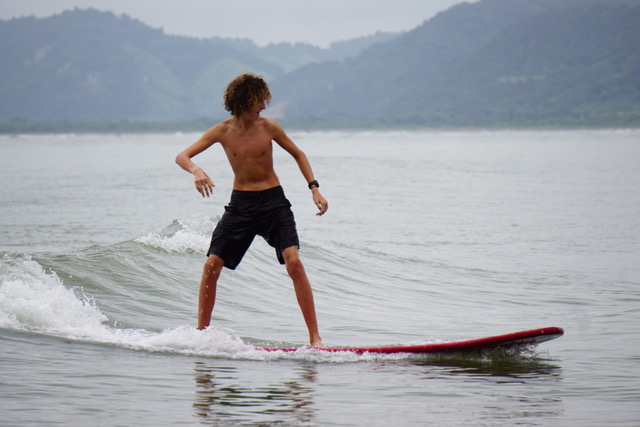 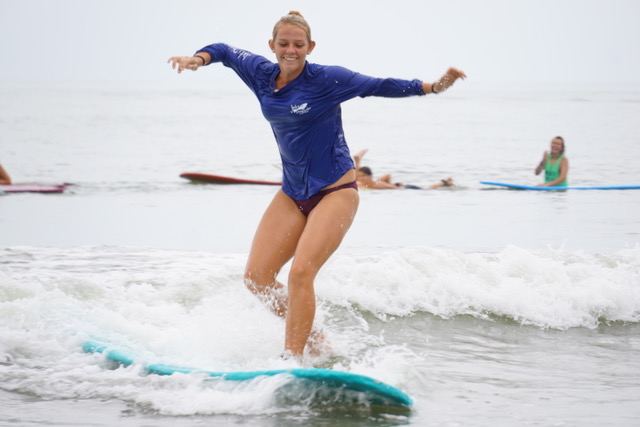 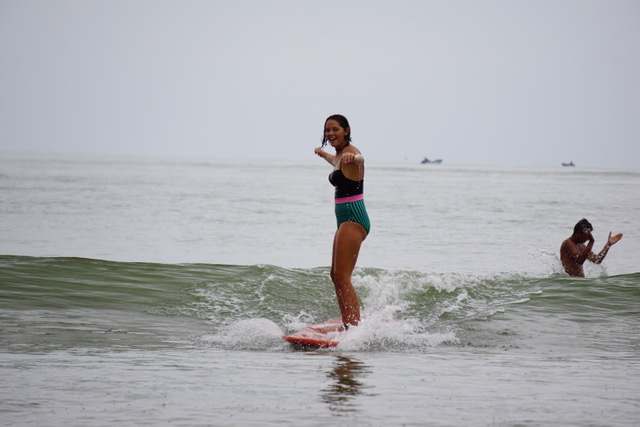 The Zatara creatures did well too. Here’s Jack, 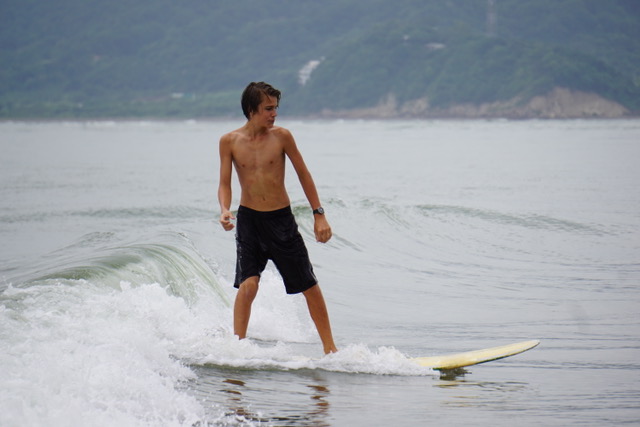 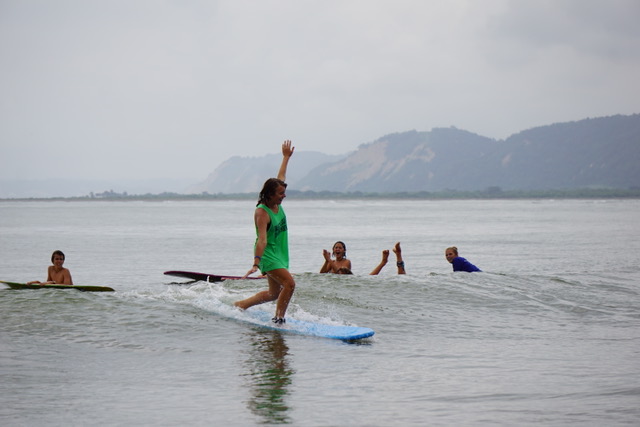 After 2 hours of lesson, and lots and lots of progress, the creatures posed for a photo with their instructor. 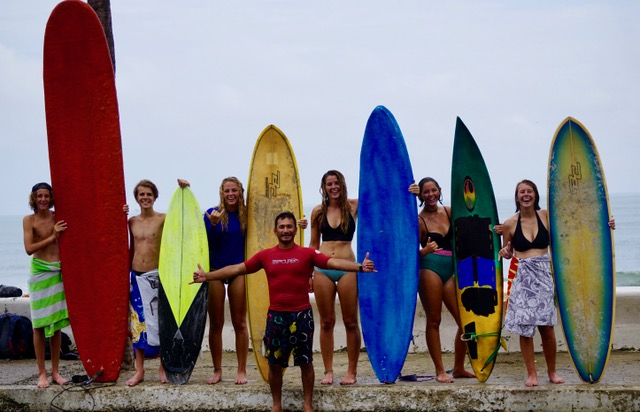 Such a fun experience with an amazing group of kids. They now feel like they could rent boards and keep practicing on their own and learn by practice and repetition.

I found out the name of a doctor we could take Danny to, so he and I caught a taxi and had it checked out. The doctor examined his knee, said that it’s a ligament problem, and gave him a couple shots of cortisone right into his knee, and another shot into his butt. 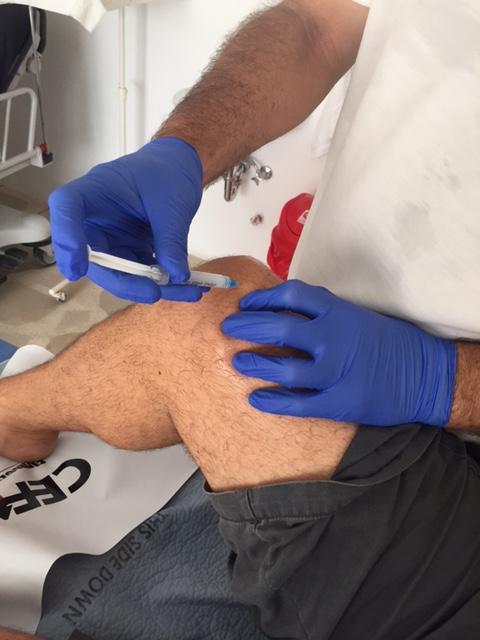 He then attempted to explain to us what was going on, but we simply couldn’t understand each other, so I called my friend, Elayne, and she translated. Danny is supposed to stay off his leg for 8 days and take some prescribed medicine, wear a brace and hope things improve. If there is no improvement after 8 days, an MRI would be needed. The hour long appointment, shots and meds all came to $80!

In the mean time we are still waiting for our Galapagos paperwork to go through and continue to enjoy the beauty this country has to offer. 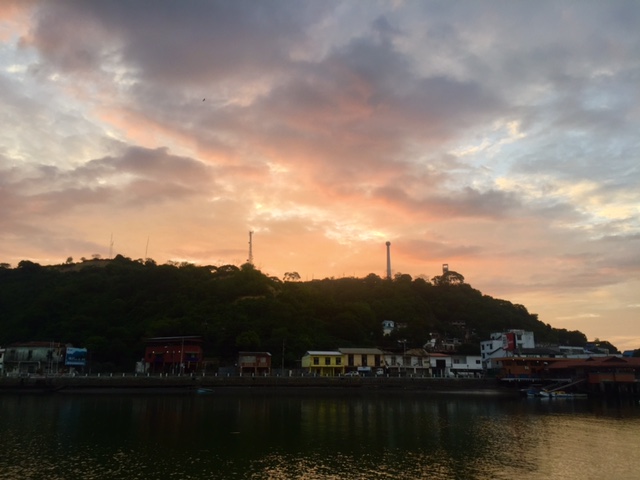