Once we’d anchored, we straightened things up a bit and lowered the dinghy from its secure perch on the davits where it had been held tight for 19 days. Danny reattached the engine and we all piled in to head to land. It felt strange leaving Tanda Malaika – like I was abandoning her, but she looked so peaceful in her new setting.

When we boarded the dinghy we noticed the growth on her hulls from the crossing…a brown disgustingness that’ll need to be scrubbed off. It looks like we started growing some lawn on the sugar scoops as well. 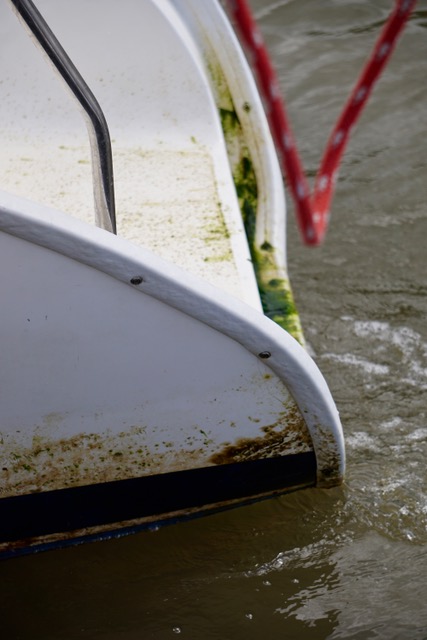 When we reached the dinghy dock, and climbed out onto the concrete steps leading up to the road, we all felt a rush of dizziness and nausea as the concrete seemed to become fluid, swaying back and forth below our feet. We felt like we were walking like drunk people on a moving rope bridge. I have no doubt the locals were laughing at us.
One of the first things that came into view, was a Hawaiian Ginger flower, the color so striking and fragrance so rich.

As people passed they waved, smiling with big bright smiles, greeting us with ‘Bonjour.’ After raising the anchor in Galapagos, we left behind the Spanish language we’ve become accustomed to over the last two years, and have now dropped anchor in French speaking lands. Emma and Jude have been studying French, so Mycah can now rest as Spanish interpreter and Emma and Jude can take over as the rest of us struggle to learn.
We heard there was a grocery store in town which is an hour walk away, and given how much the ground was moving, we stuck our thumbs out to hitch hike. Immediately a young gentleman in a short bed truck pulled up, and I asked him if he could give us a ride into town. He smiled shyly and moved things around on his back seat, at which point I realized (again) that I’d been speaking English to a French speaking man, and he finally in broken English asked, ‘ to da village?’ We nodded yes and all the creatures jumped in the back and Danny and I in the cab with him. 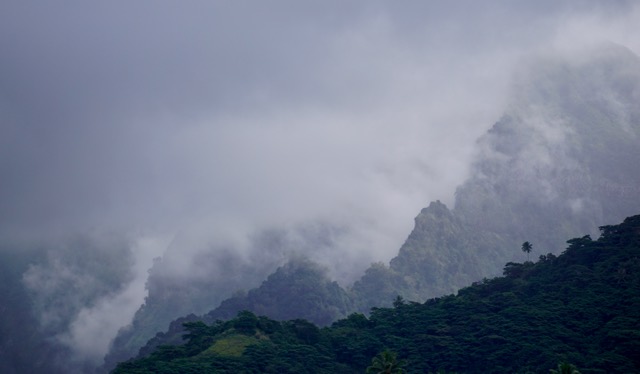 The road into town was beautiful. So much green, it reminded me of Hawaii, yet the mountains here are higher, more rugged. The land feels untouched and ancient. We were dropped off by a beach and our driver motioned with his hand which road we needed to walk down.

When we reached a crossroad with a small store ahead of us, it meant we’d reached town, which consists of a hardware store, a burger joint called ‘Make Make’, two stores with a few groceries and a bank. It was 11:30am and everything except the burger joint was closed. On the hardware store door a sign stated that stores are closed each day from 11:30am to 2:30pm for lunch and nap time. They open at 9am and close at 5pm. The burgers smelled good, so we figured we’d at least give ‘Make Make’ some business, and walked our bodies drenched in sweat to their tables below a wall fan. Close by an Artisan Center was surrounded by Tiki’s. 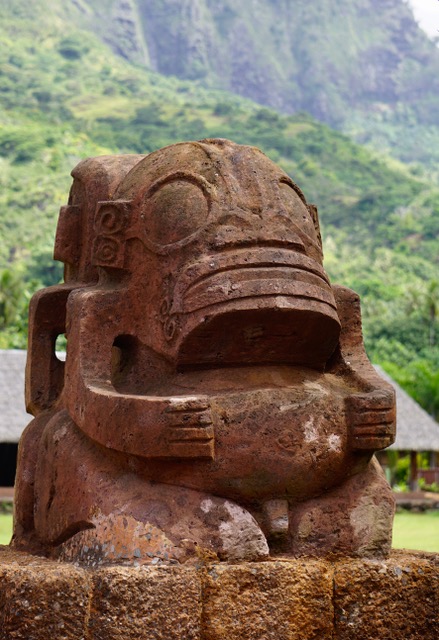 They varied in size and shape and I made a point of setting a goal to find some reading material on them to learn their significance once we have wifi.

So far T Mobile has worked really well for us outside the US. We have found out that T Mobile does not cover French Polynesia, however, and incoming and outgoing texts will cost us 50c each and calls are $3 a minute. Obviously we won’t be using cell service! 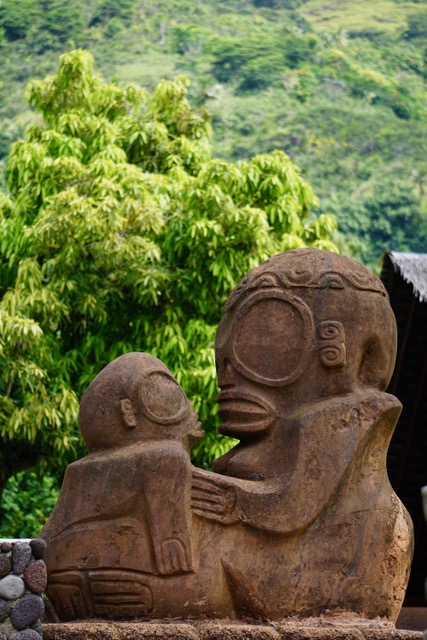 There is a place on the hill with a beautiful view where one can pay $5 for wifi, they type the code into your device and change the password everyday. When we are up there we can make calls on FaceTime or iMessage and send and receive emails and iMessages. 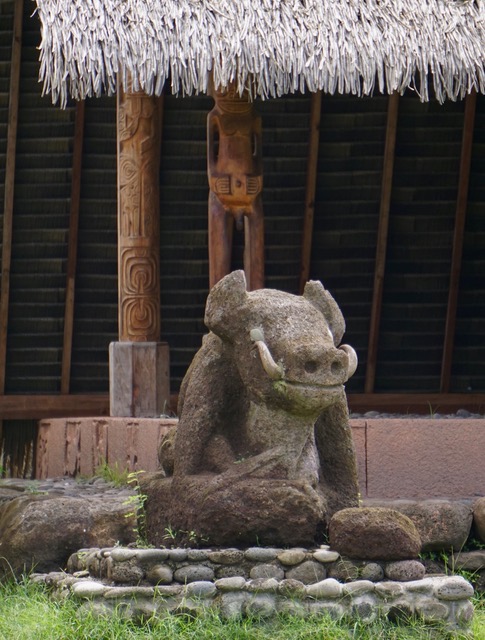 We thoroughly enjoyed our burgers, then decided to walk back to the anchorage and enjoy the scenery as we hiked along. Even though it had been mostly uphill into town, it felt like it was mostly uphill to get back as well. Maybe it had something to do with the fact that the road was swaying gently from port to starboard the entire time. It didn’t stop Aidan from riding his skateboard though. 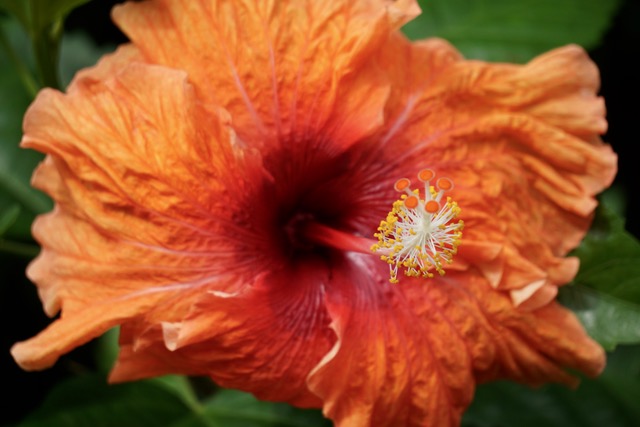 I’ve seen hibiscus in many shapes and sizes,

but I’m not sure I’ve ever seen them in white. They are so striking. So simple.

Small huts stand in their jungle surroundings, and roosters and chickens run freely everywhere you look.

Swollen streams rush down the mountain sides and empty into the bay where we are anchored.

All the rain causes the water in the bay to be filled with mud, giving it a brown hue, leaving the anchorage below with a little less inviting look. It’s all still so picturesque though, and I once again feel like we are in Paradise.

We all enjoy the walk together, some stopping periodically to take pictures or smell flowers. Danny has named the tiny stones that get in his crocs, ‘crocrocks’, and once in a while stops to shake one loose. The creatures found starfruit and picked a couple to take home for later, and everyone chats and laughs together as we enjoy the wonders of this land. 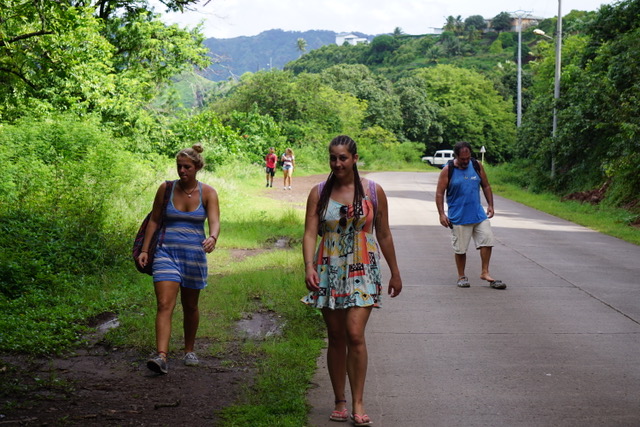 We recognize so many things from other places we’ve traveled, which makes us feel right at home, yet there are many new things we find that leave us staring in wonder. 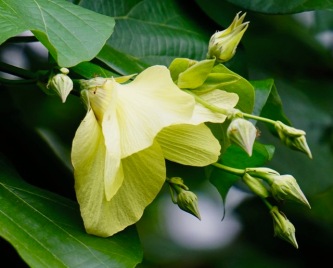 The land is alive. We see roots like exposed veins pulsating in and out of earth, feel the moisture from recent rains and breathe the thick oxygen released from the jungles that surround.

This in turn makes us feel more alive, our bodies ready to embrace the movement of land explore this place, where all that surrounds feels sacred and untouched.