Hard work then back to play

Though we didn’t want to leave our beautiful bay in Tahuata, we knew we had to return to Hiva Oa for our diesel certificate so we could purchase fuel. We decided that once we had the fuel we’d return to Tahuata for a day or two then head on.When we reached Hiva Oa, rain was descending in amazing volume, and it just never let up. Aside from the time we changed into our dry clothes at night to when we woke in the morning, we were constantly drenched. Luckily the rain is warm so we just ignored it as best we could and continued on with our business as usual. Tanda Malaika was a wet mess too – all stern cushions and wooden deck were completely saturated and we gave up on trying to dry towels, because humidity was so high that nothing dried out even when we hung it up out of the rain. Rain gear was worn by the two goofy girls, but really didn’t help much. 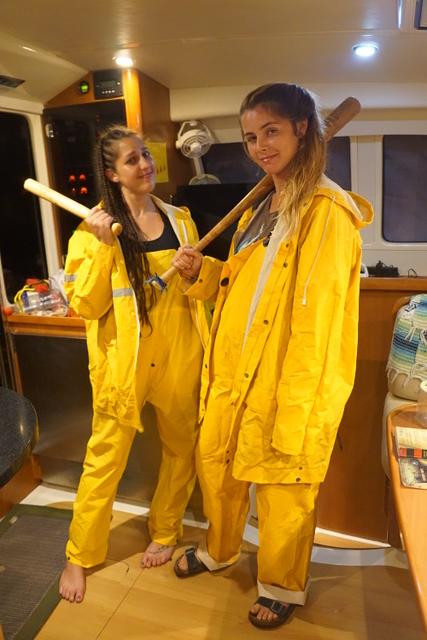 We loaded the twelve 5 gallon diesel cans into the dinghy and made three trips back and forth to purchase fuel then empty the cans into Tanda Malaika’s tanks. Jude and Mycah did most of the carrying and felt like their arms were dead by the end of it all. The water in the bay was a darker shade of brown than we’d seen before, and on one of our return trips as Danny approached the stern in the dinghy, a wave shot us forward and my body continued on with the dinghy under Tanda Malaika while my chest, arms held fast to the railing where I was supposed to exit, and I ended up in the drink. Immersed in the brown water. I swam over to the ladder, climbed up and got what we needed in town and returned without bothering to change because I was drenched before anyway, and we carried on. Danny felt so bad and apologized several times but I assured him it was a good time! Later in the day as Kjira slid on her butt all the way down the sugar scoop steps and into the chocolate swamp as well. When all the work was done and the rain continued to pour, in our swim suits, we took showers on the stern. As we stood with soapy bodies, being washed of in the downpour we looked across the anchorage and noticed people on at least five other boats taking rain showers too. It was a comical sight…a anchorage shower party.
Finally, with a new big bunch of bananas hung, we were able to return to Tahuata to dry out, and on the way saw several waterfalls from all the rains.

The scenery in Marquesas is so dramatic and incredibly beautiful.

The new day brought with it a warm sun and beautiful blue skies. Danny decided it was a good opportunity to dismantle the starter that was causing grief, to work his magic on it,

and while he did, some of the creatures went exploring. Their friends on Zatara happened to be in the bay too, so the explored together.

I embrace the sunshine and did laundry. There were many wet items that needed to be washed and dried before some smelly ugliness set it – which happens quickly in these humid areas. Aside from bananas and among so many others fruits, 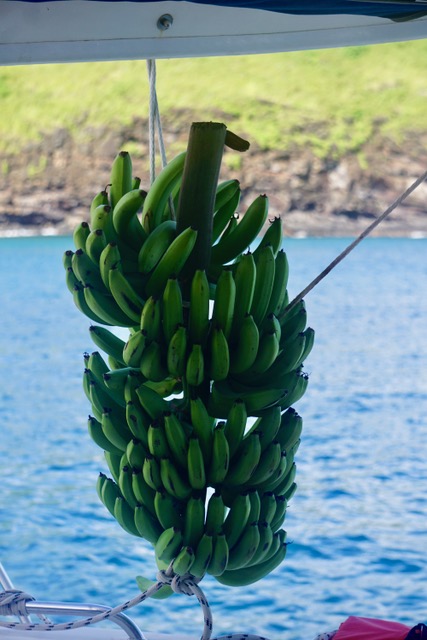 we really love pamplemousse. The are a grapefruit on steroids and quite a bit sweeter. Each wedge inside is so thick and just two of the slices fills me up. 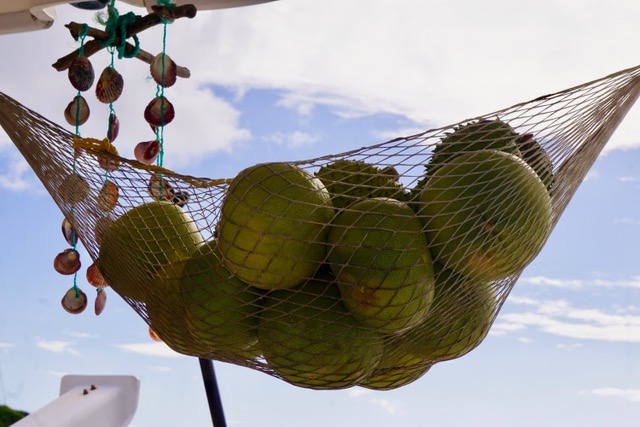 Our good friends on their boat named ‘Son of Moondance’, arrived later in the day just when everyone was needing to cool off once again, so we told them to come over so Danny could pull them around on the tube. The creatures also invited the Zatara kids and they brought their kite board with them so Kjira could try wake board on it. 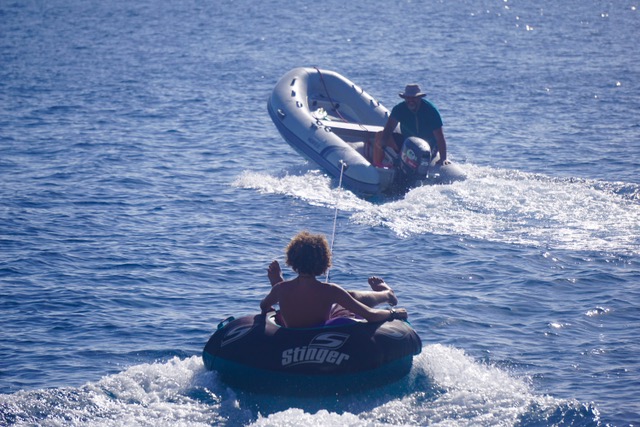 Danny had so much fun trying to send the creatures flying, and succeeded with everyone except Jude. Aidan went first, followed by Mycah.

After that, Emma held on for dear life,

Anna from Zatara did a fine job as well, 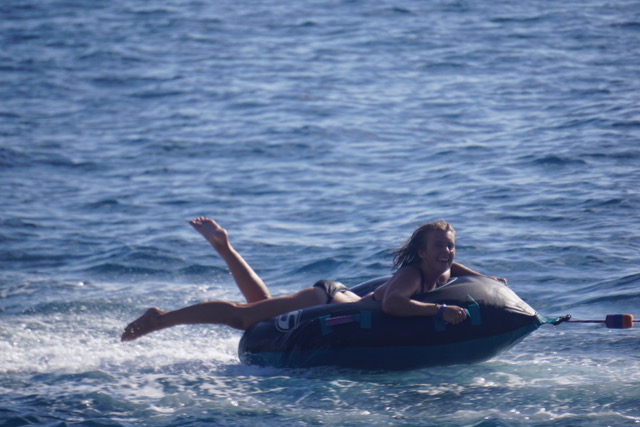 Then Kjira showed us how it’s done on the kite board.She didn’t even lose her sunglasses! 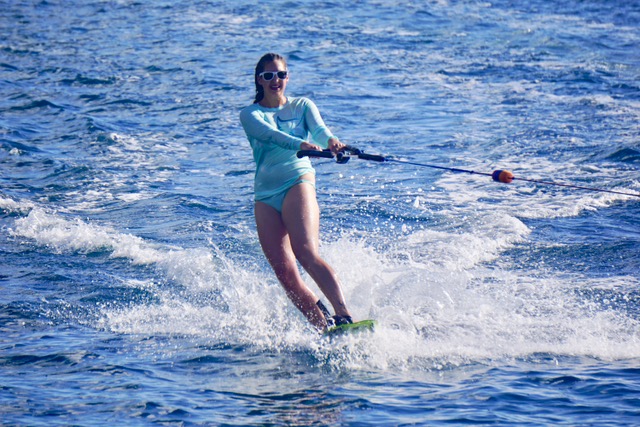 Jack from Zatara also got up,

and our friend, Harry, from Son of Moondance showed us how he can ride the knee board. Everyone had so much fun and Danny got a good workout driving the dinghy.

We swam and relaxed, collected shells and ate fruit.

At night when we went to bed we were thoroughly exhausted and completely content!