We climbed into the family car and motored to the village, curious to meet the locals and see the surroundings. We had no idea that we were about to set foot in the Garden of Eden where the most wonderful people live.

As we approached the dock, Danny pointed out that the big rock on top of the sandstone outcropping looked like an elephant!

Locals were jumping off the dock and swimming,

children playing on the beach, and an old stone Tiki lay crouching like it was watching us approach and guarding the village. 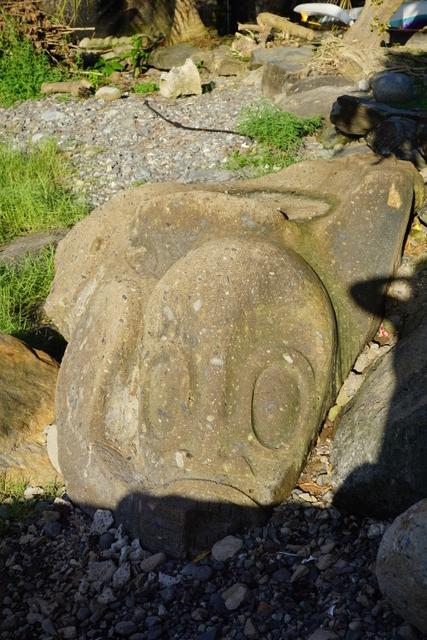 Streets were paved with concrete and looked clean and well maintained.

As we walked through the village we noticed that every tree was a fruit tree, ranging from giant mango trees, to starfruit, papaya, coconut, breadfruit, pampelmouss, orange, lemon, banana, pomegranate, noni, soursop, guava, and also passionfruit vines. It was incredible, everywhere we looked, food was growing…like we’d just entered the lush, green Garden of Eden. 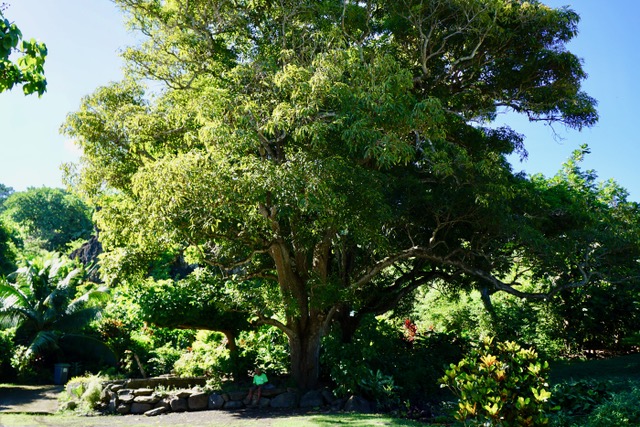 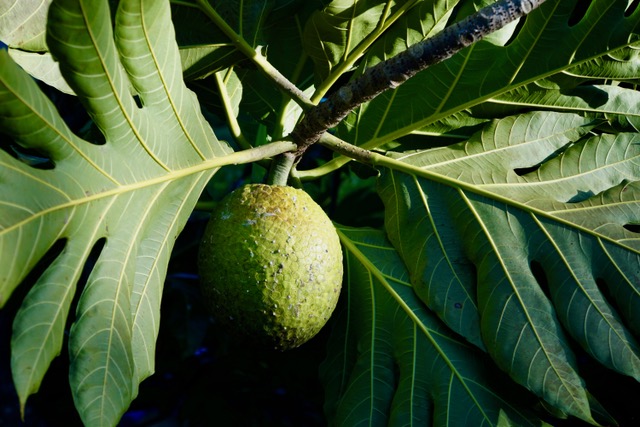 After purchasing a few 70c baguettes, we walked through town, and at the end of the street the view was spectacular.

Coconut shells and husks lay in piles like grass clippings in the country,

and then we noticed how coconut had been laid out to dry in the sun at the top of someones driveway. At night corrugated metal sheets are placed on the wooden poles to cover and protect the drying fruit. We later found out that much of the coconut is then taken and sold in Nuku Hiva and Tahiti.

Danny found a great lookout spot and took a picture of the bay through the fruit trees.

Farther down the road I caught a glimpse of our home, anchored safely in our new surroundings.

We heard a truck approaching and turned to see that it was Atea, done with paddling practice and ready to take us. We all loaded into is truck and he drove us up to his sweet mothers home to pick fruit. Danny got an armful of delicious soursop.

Atea had the creatures follow him around while he picked pampelmouss, tons of starfruit which they don’t eat, and bread fruit. He offered bananas but we still had the entire unripe bunch hanging on he boat.

Atea’s mom showed us where she pounds bread fruit, 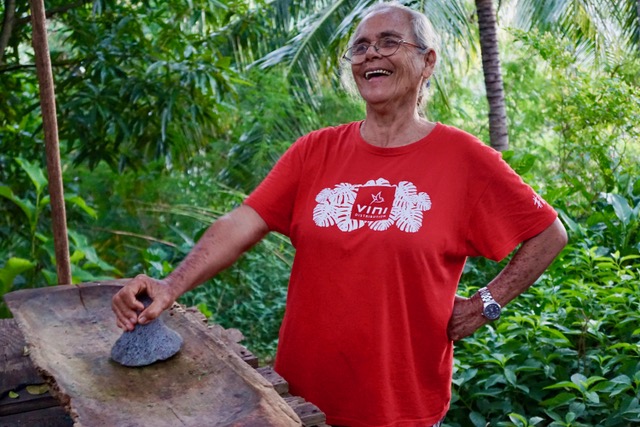 and also the many straw hats she makes to sell. Every once in a while she will load them up and go over to the other islands and sell them.

When Atea dropped us back off at the dock, he told us to come back in the morning so he could direct us to where there’s a beautiful hike, and that him and his family would like us to join them for dinner tomorrow night. We told him we’d be honored, and would supply the fish. Mycah told Atea that she wants to learn how to paddle an outrigger, so he has arranged to teach her.
We have been welcomed with open arms into this village, and are excited to meet more of the people and see more of the surroundings.

2 thoughts on “Garden of Eden”

Beautiful Darling, love the hats. What are they made out of?

Like you said, you HAVE found the Garden of Eden!! How will you ever leave that beautiful place? I’m so grateful for your blog…it has shown us so many wonderful places that we didn’t even know existed. You’re all living the dream!!  Mom