I lay my head of wet, freshly shampoo’d hair on my pillow, body flat against the cool crisp sheets, and let out an audible sigh. A sigh that represented exhaustion, disbelief, shock, questions and gratitude for life and for the amazing feeling of sheets. Clean dry sheets. I had been drenched in salt water out on Tanda Malaika for so long that my fingers and toes had become wrinkled, and here in my borrowed bed I could feel that the wrinkles were finally going away. I closed my eyes for a moment and saw Tanda Malaika from above as I was raised up into the helicopter. 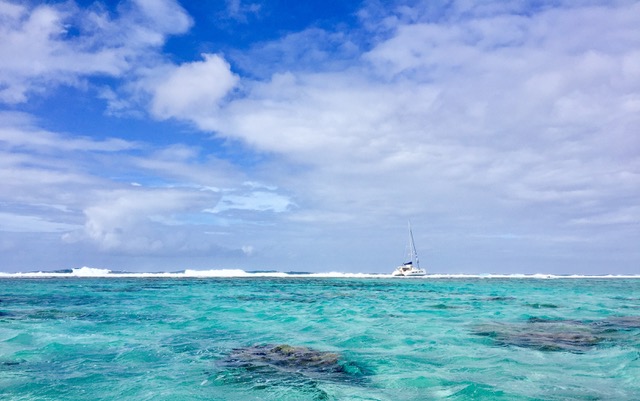 We stood quietly watching her for a while, each absorbed in their own thoughts. Each fighting the urge to burst into tears. Our dinghy wasn’t at the dock yet so we used the resort wifi and made contact with family while we waited. My mother cried with me on the phone as I expressed my love for our home and the torture she had endured just a few hours ago. Some may think she’s a luxury and not a home, but we had lost everything on land when all that was in our storage unit after moving onto her was stolen in California. We owned nothing on land except for a ford excursion we’d been trying to sell. Most buy homes on land, we bought ours on water for a very low price out of charter and had put time and money into her over the two years as we lived on her – our goal was to take her and do humanitarian work all over the world and we loved all we’d be able to accomplish thus far. We had always been the givers, the hard workers, the receivers of so much love and friendship as we served. We suddenly found ourselves in a very different situation – temporarily unable to help others like we were used to. As I watched her I wondered what miracle it was going to take to get her off that reef. Our insurance had dropped us in Galapagos even though we had 12000 nautical miles of sailing experience, saying we didn’t have enough experience to make the 3000 nm journey from Galapagos to Marquesas. My thoughts were interrupted by the sound of our dinghy approaching, with two cruisers we’d never met in it. They pulled up and introduced themselves as the ones who had tried to come to our aid the night before. We thanked them for their bravery and compassion and asked how Tanda Malaika looked. They said she was solidly stuck on the reef but didn’t look terrible – they’d seen worse, and it gave us hope. We dropped them off at their boats so they could get their dinghies, and set out in the direction of our beloved home. The resort had kindly offered for us to use their dock to temporarily dump our belongings on as we retrieved the most important things from the boat – just in case. The closer we got, the more my heart sank, and I looked at my children and Danny and could see they felt the same way.

Tanda Malaika was in such a terrible spot. There was so much reef all around her and I knew that if she could be towed off she would suffer so much more damage. Her sacrificial keels and rudders were already gone. The paddle board racks were already so bent to starboard from the waves. Our poor, poor Tanda Malaika. We each quietly made comment about dreading what we were going to see inside her. Dinner would still be on the stove, school books still in their places ready for the days lessons, chore chart still taped up in the galley for all to have access to, but what else were we going to find?

Making our way to her from the dinghy was treacherous as we had to work through a minefield of jagged coral. This poor reef. I felt so terrible for the reef, for the coral we had killed.
As I climbed the swim steps I talked gently to her telling her I’d missed her and how much I loved her. We are going to get you off this reef, Tanda Malaika, and everything is going to be ok. Our adventures will continue. We will raise your sails, fish from your stern, lay on your trampoline and look up at the stars and talk about my brother and Dad that are out there watching over us. We will play guitars and ukuleles and sing as usual, we will take aid to those in need, we will scrub your decks and keep your tanks full. Smells of delicious food would continue to come from your galley and writing and creativity would abound in your hulls and at your table. I love you, my strong, beautiful home. My Tanda Malaika.
Life jackets, throw pillows and shoes were scattered about the stern salon, and we opened the sliding glass doors and entered the main salon and galley. The floor was wet and cluttered with books, flash lights, items from the ‘blue basket’ of sunscreens, ointments and allergy meds. Battery chargers and various other items were on the opposite of the boat from where they were supposed to be. A wave hit the port side and I heard water running, and looked down into the port hull. The bilge in the forward cabin was exposed and the hull was breached allowing me to see the ocean below. 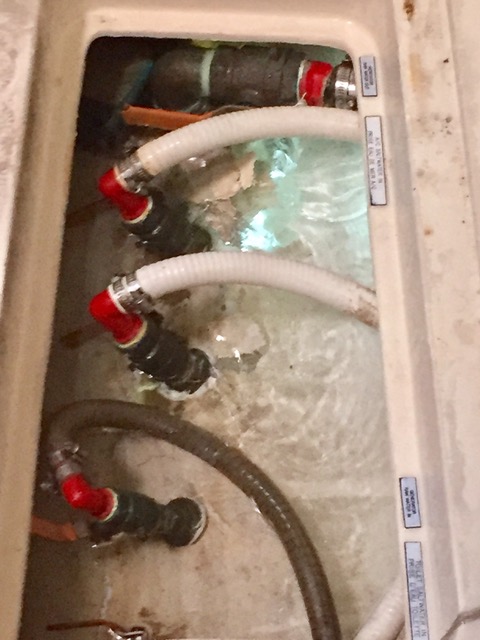 The floor in my room was covered in oil and the shelves where clothing had been under my bed were filled with oily water. The head floor was one giant puddle with rolls and tiny pieces of fresh toilet paper rolls.

Everything was going to be ok. Wasn’t it? Just be positive. Is that realistic or am I just setting myself up for heartache? Be strong for the creatures Belinda, be strong for Danny. Be strong for yourself.
I made my way into the galley, reached into the cupboard where we stored the garbage bags and got busy gathering items we needed to use in the next week. Some clothes, the dripping wet school books, toiletries etc. Other items that were important were gathered too. Thank goodness Danny’s Teton guitar was still dry. I looked at my big jar of brewing kombucha that my friend, Cheri, had given me a few months earlier, and told the scoby I’d rescue it as soon as possible. We worked quickly, bracing ourselves periodically as a wave hit the port side with great force. Tanda Malaika was slowing being pounded…how much of this could she take? Our new brave and selfless friends that’d come to the rescue carried the bags we filled to the dinghies and ran loads to the dock at the resort, only to return for load after load. The day was long and exhausting and I looked around thinking that we hadn’t even made a dent. Luckily we won’t have to take everything off because the salvage company who we still hadn’t been able to get a hold of, would tow her to the haul out in Raitea and we’d have access to everything there. Right? I reassured myself and the creatures that that was what was going to happen. Not once did they complain, they just worked and worked. Danny dismantled things that he wanted to protect and save from the constant bashing of waves. How do we get through all this? Just one bag at a time. Everything is going to be ok.
Finally it was time to head back and sort through the things on the dock. Where were we going to put everything? Would the resort have a shed or spare room we could rent? How long till we knew when Tanda Malaika could be towed to safety? So many unknowns – that’s the worst part. The unknown. I walked across the reef toward the dinghy, my sore back bent over like I was an old woman, and I clung to our new friend from Cape D. He comforted me with encouraging comments as I teared up when leaving our home behind once again. He caught me and pulled me up as I fell on the coral and bloodied my legs up again.
As we pulled into the anchorage and turned in to get to the dock we noticed a familiar Leopard 46 at anchor. Friends, Dave and Janet, whom we’d met a few months earlier were standing at their stern, and waved to us. Their boats name is ‘Geniet Lewe’, which is Afrikaans and means ‘Enjoy life.’ Dave and Janet spoke to us with loving concern and offered for us to stay with them. We could split up between Makara and them to allow for more room, and store our belongings on her as we sorted through things. We were so grateful for their offer and humbly accepted. We immediately got to work laying school books out in the sun, turning pages one by one to help them dry out. Night time came and we were still turning pages and sorting. Janet and Emma had started the endless task of doing laundry, using their washer and hanging things out to dry on lines on the bow. Mycah’s back was so sore from being thrown about the boat the previous night and Janet, who is also a trauma nurse, massaged it and also doctored our wounds from the coral.

When we finally all lay in our various beds between the two boats that night, we were so exhausted from lack of sleep the night before, from working hard all day, and from the emotional rollercoaster we were riding on. The room Danny and I had been offered was the exact location that ours was on Tanda Malaika, and in many ways it made us feel instantly at home, but also miss our own home. We hoped we’d only have to take advantage of Dave and Janet’s generous offer for a couple days, then we’d be in Raitea and could rent a place there while Tanda Malaika was worked on. This nightmare would end and soon we would once again be on our way with one heck of a journal entry and a few more things checked off my bucket list. Right?

I would like to help a little, as much as I can. Do you have a link? I don’t have facebook

Belinda. We knew it before, but you are truly amazing.

So glad you were able to get some of your previous things. Good luck for the next few days and getting your lovely home off the reef.

We are all pulling for you. Your positive attitude will bring positive results. Hang in there. Our homes are tougher than you think. Your family is safe. As Bob Marley says ‘Evatings gonna be alright’.

Thank you Kitty. We have been so blessed through all this.

Hello from the crew on Jandamarra, Guys we are all very sorry and saddened to hear the terrible news of Tanda Malaika we could not believe it when we starting reading about the grounding in Sailworld. Stay strong and we hope everything works out for the best. We are all thinking of you guys and miss the music such special memory’s. That we will never forget
John , Jack, Harry

Thank you John, Jack and Harry. It’s been rough but we are strong. Hopefully we’ll see you out on the ocean soon again!