We’ve learned some interesting things about airlines as we traveled from NZ to Bali: When we flew from Tahiti to New Zealand, the baggage rules for Air New Zealand was that each person is allowed a 7 kg carry on and a 23 kg checked bag. We ended up paying an extra $1000 for our extra duffles, guitars and 2 skateboards that didn’t fit in duffles. We thought that was steep but had no choice but to pay it and move on. When we left NZ to travel to Bali, we flew on Quantas and their rules are a 7 kg carry on and a 30 kg checked bag, and anything after that is $28 per 1 kg in luggage. It was going to cost us about $600 per bag to fly them as freight, which meant a total of $2000 in extra luggage. We said forget it, and picked 6 duffles at the airport to check in as the regular baggage and sent the guitars, drone and extra duffles back with poor Conrad to keep at his house. Here’s the problem…we had no idea what was in the duffles we took with us because we consolidated clothing etc and spread them among the duffles so they all weighed 30 kg for Quantas. We figured it’d be a fun adventure to see what we end up with! The flights went well. We stopped in Sydney, Australia for 90 minutes then carried on to Bali. I took a photo of the beautiful Australian coast line. 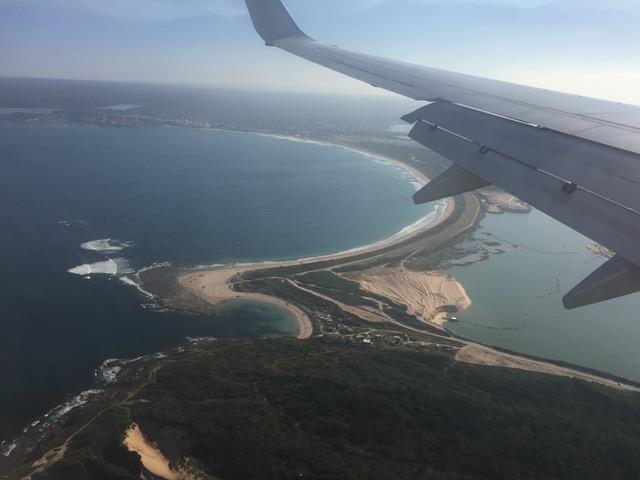 As we stepped off the plane in Bali, we were greeted by warm, humid air. The airport was beautiful with wonderful, interesting architecture.

We checked into our hotel which is a whopping $39 a night for our two rooms, and were finally able to take showers then disappear below the heavy white comforters and crisp, cool sheets and drift into a deep, restful sleep. It felt SO GOOD!!!
I woke up at about 4:30am because my pain meds had worn off, then couldn’t get back to sleep, so I read some information about Bali. I was interested to read that they have no tolerance for drugs of any kind. If someone is caught with any drug – be it marijuana or anything else, they’ll get life in jail. If the authorities can prove that you are a dealer you get the death penalty.
As the morning light shone through spaces between the curtains, I moved over to the window to watch the world outside. An old woman stood below a large umbrella selling food, and had a regular stream of customers. Three large young men emerged from a narrow alley way and all climbed onto one small white scooter and drove off down the street. Mototbikes and scooters – all 49cc’s passed by in a steady flow. Some carried entire families of 3, 4 or 5,

others rode by carrying huge bundles of goods.

Words written on store fronts were ‘Martabak & Terang Bulan’, ‘Pangkas’, and ‘Kalasan’, and I thought about how excited I am to learn what they all mean. I want to learn the language, the recipes and the traditions.
Our rooms come with a complimentary breakfast buffet, which the creatures absolutely love. The buffet consists of everything from fruits, omelets, yoghurts and pastries to sushi, rice, meat and noodles. Then there’s the display of drinks…

I took what I thought was mango juice, and found it to be a thick turmeric mixture. Knowing that turmeric is so good for us, I did drink it, but it was definitely quite a surprise when my taste buds were expecting mango! One of the creatures taste buds were met with something we still haven’t identified when they thought they were drinking watermelon juice.
The creatures and I went for a walk down the sidewalk, and had to watch our step because periodically there would be a small basket with food and flowers that had been set out for the Hindu Gods.

We entered a large store which was filled with food, clothing, bedding, souvenirs and toiletries. I had with me 100 000 Rupiah, which translates to $7.50, and with it, purchased Aidan a pair of board shorts, a cute little dress for our grand daughter, lotion for Mycah, and some snake fruit which we’d never seen before and had to try, and I still got change back! I couldn’t believe how cheap it was. That $7.50 is not written wrong, it’s really that cheap!
The snake fruit is so pretty. 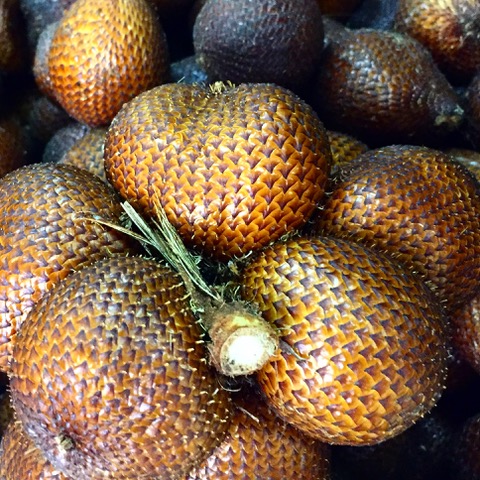 The skin is a dry, thin paper- like covering and when it is all peeled off you’re left with what appears to be a large clove of garlic. 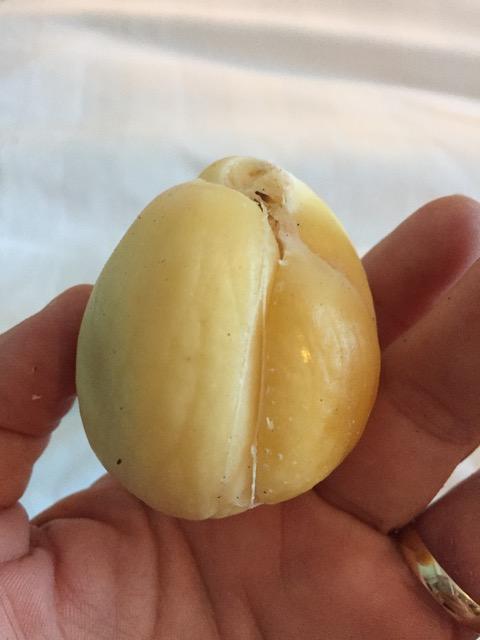 I broke apart the ‘clove’ and bit into it and found it to be firm and crunchy and quite delicious. When the creatures saw it was safe they tried it too and enjoyed it. Inside each piece has a large brown seed. 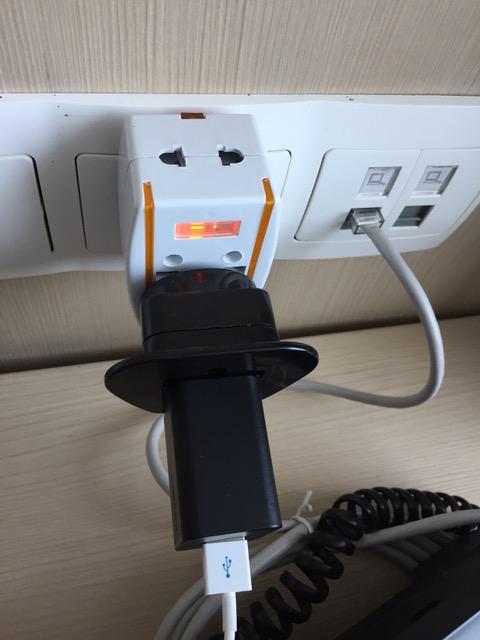 I have been so excited to get to Bali because just by chance, for this week, my cousin, Anthony, who lives in Australia, is visiting with his beautiful wife and 3 children. Anthony and I haven’t seen each other for about 30 years, and when I saw him I wrapped my arms around him and cried and didn’t want to let go. I love him so much!

What a reunion!!! I have loved getting to know his Sweetheart, Teresa, who I have no doubt would be my partner in crime if we lived close to each other.
We decided to all go for a walk to see what we could see. 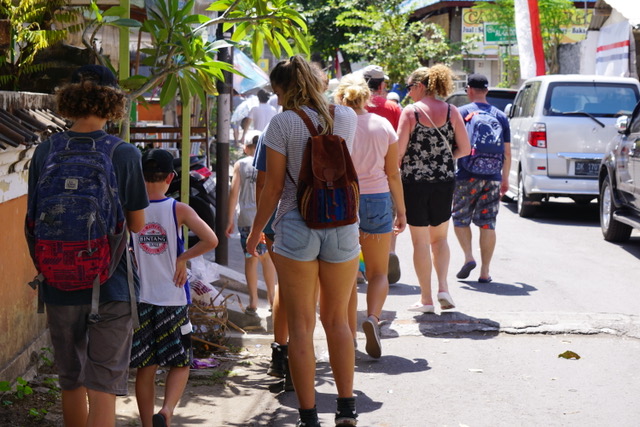 The Balinese people are so sweet.

They are so friendly and kind and have beautiful big smiles. We felt like a group of giants because the locals are so short! Banners and flags have been hung everywhere because on the 17th of this month is their Independence Day celebration.

School children in uniforms gathered around street vendors who had carts and store fronts filled with food and things to drink.

I love the fresh fruit markets,

and when Mycah saw some massive dragonfruit for sale, she had to buy a few!

We watched a sweet elderly woman weave little boxes from strips of palm leaves. She was happy to show us and moved her hands so quickly.

As we made our way back to the hotel after eating some delicious local food, we past a patch of grass where hot peppers were being dried in the sun.

All the creatures grabbed swimsuits and we went up to the hotel roof were they enjoyed the pool. I didn’t swim because all my clothing aside from a couple dresses and t shirts, were left in NZ.

As the kids swam we could hear the call to prayer echo across the city. An eerie, yet beautiful chanting. We are so excited as a family to learn the culture, to understand the traditions and be a part of it all.

Today we will be meeting with a realtor to look at some rental homes. As always, the adventure continues.

Awesome and how quickly you traveled. Not 8 knots is it! Those airlines now run farrs so cheap and have to make up for it some how I guess….. $39 cheap digs too. I,m in Perth and most locals here get a 10 – 14 day holiday flights accomadation etc for AU$1300 and as cheap as $895 some times! So pleased you all are looking to settle in!

Thank you Ed, it feels good to be in one place for a minute, though we miss being water gypsies. Thank you for your support and encouragement.