Our excursion to Blangsinga Falls in Gianyar was a wonderful adventure. The Falls are about 13 meters tall (40ft), and are fed in part by the Petanu River. 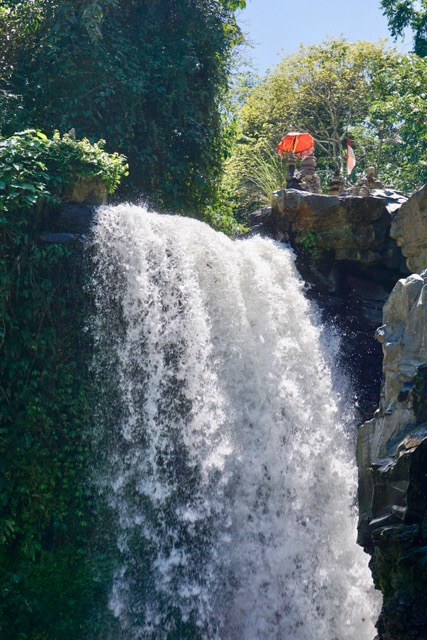 We entered from the top of the falls, where a small cemetery lies. 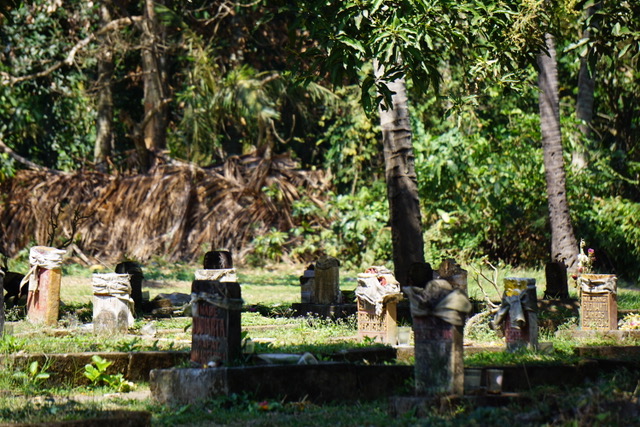 A few locals were meandering through tiny towers of balanced rocks, where they had come to pray.

The area is sacred and the water is believed to be healing. A friendly yoga master smiled as we approached and loved knowing that we had a couple yoga enthusiasts in our group. He looked wise and left me wanting to know his entire life story. 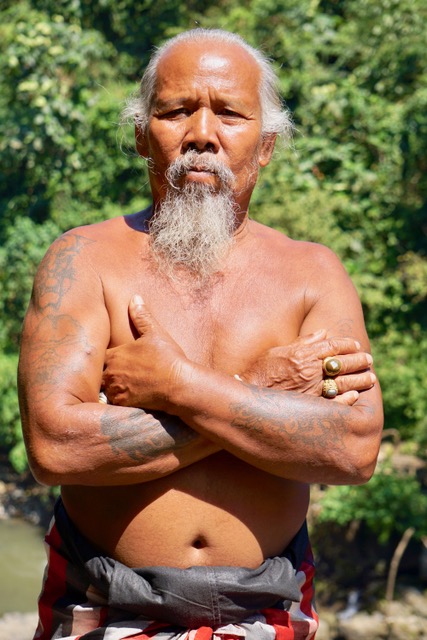 Before descending the vast amount of stairs to the base of the falls, we were greeted by a friendly young man. He insisted on showing us his yoga moves! 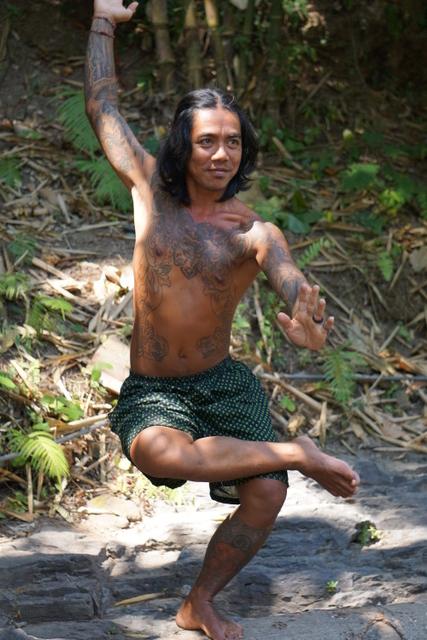 Altars with offerings to the Gods were all through the hike down, each with umbrellas, incense and flowers. 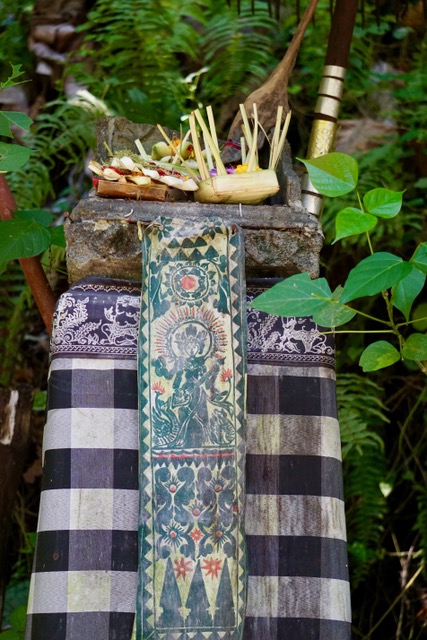 At the base many people gathered in swimsuits to walk into the water and stand for a moment, and the spray from the falls moved across the scene as if in slow motion. The cool moisture covered our sweaty faces and dampened our hair. 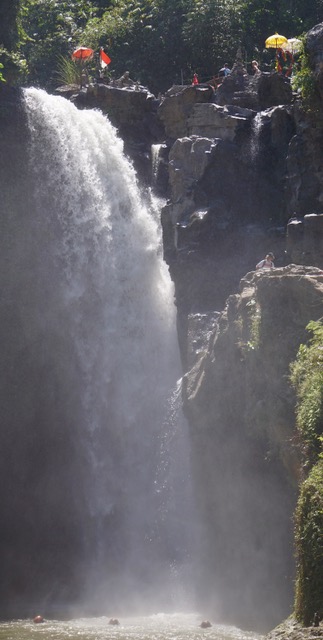 Off to one side, moss gathered in the wetness and a genius maze made from bamboo carried water from small trickles and tiny waterfalls on the mountain side, directing the flow to an area which dumped into a stream running toward the main waterfall. 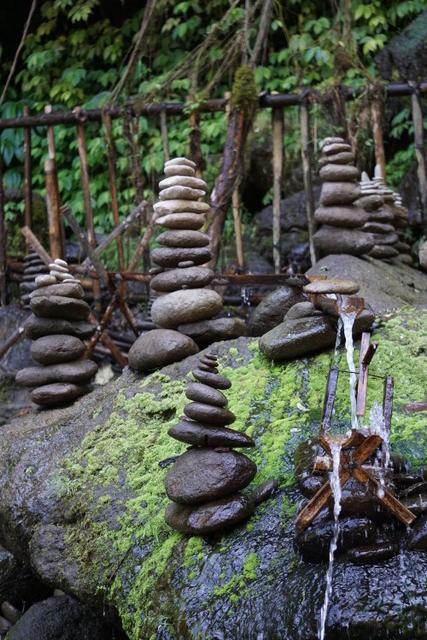 Umbrellas marked areas of worship and a small sign stated that the water was for healing and should be used and shared.

We stayed for a while and watched those that were entering the coolness of the water, noticing that some were tourists that made light of the experience and were simply there for selfies, while others had much on their minds and sought after the healing and peace offered from their surroundings. I thought about my brother, wishing he were there…realizing that he was. If only I could reach out and touch his face.

The river flowed through where we stood and turned then disappeared beyond a curve in the dense foliage. All through the area I could see small monuments standing proudly, marking the way.

After a group photo at a goofy sign, we returned to the concrete stairs that lead all the way to the top again. Our muscles ached, especially when watching Aidan and Max run past, leaping up the stairs as if on springs.

The yoga master was there once again and this time wanted photos with some of the creatures.

and Aidan did after a moment, but I had to take the photo very quickly! 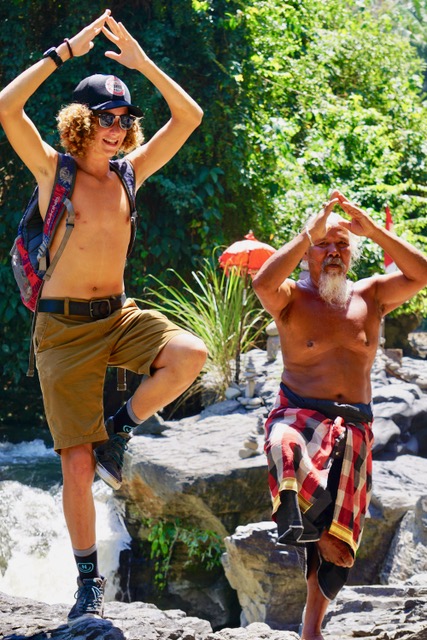 We passed by freshly laid offerings, pausing in respect, then continued on to where the cars were.

It’s so interesting to see how people relax in various countries. In places we’ve been thus far, hammocks are the lounging place of choice, and here in Bali, flat raised wooden structures are built where people sit cross legged.

While waiting in an area before setting off on our excursion, we noticed an older woman carrying heavy bags of padi (rice with the husk still on). Mycah helped her carry the bags, and we watched as she picked up a couple tarps. I motioned to her that I wanted to help, so she nodded and together we lay the tarps out and the creatures and I started emptying the bags onto the tarp and spreading the padi. 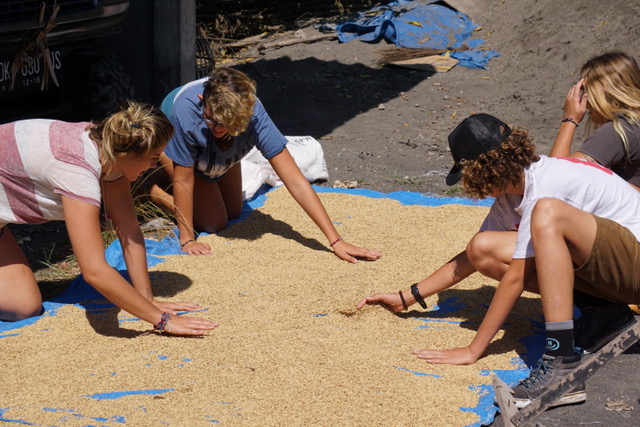 We had to spread it thin so it could dry in the sun in preparation to be husked. The drier the padi, the easier it is to husk. 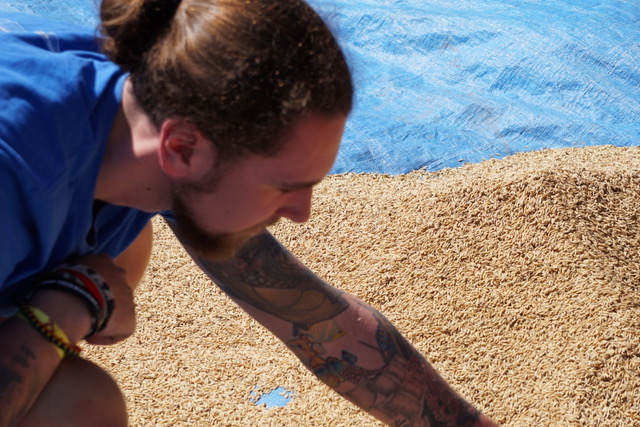 Once we were done, she took her rake and smoothed it all out a little more. 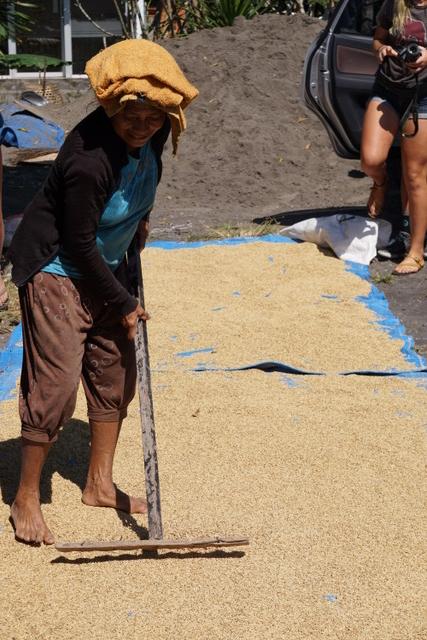 The woman’s name is Made, and as I watched her with mud on her face to keep away mosquitos, a towel on her head to soften the loads she carries there, and thought about her having to carry the heavy bags, I just wanted to take her in my arms and hold her. Tell her she’s loved. Help her. She is someones child…someones mother…I love her. 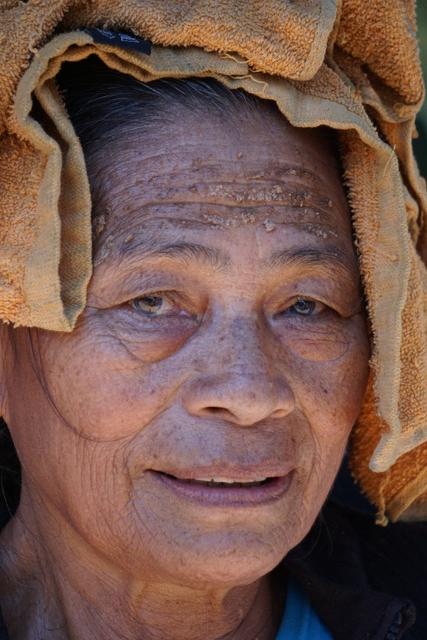 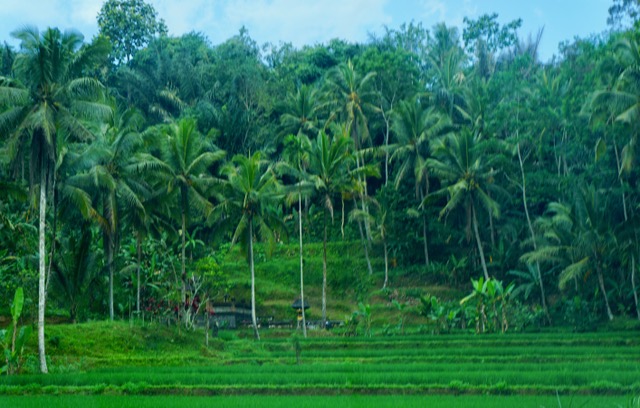 I noticed an old bicycle along side of one of the fields, and could imagine the many trips that had been made on it – back and forth to work day after day. 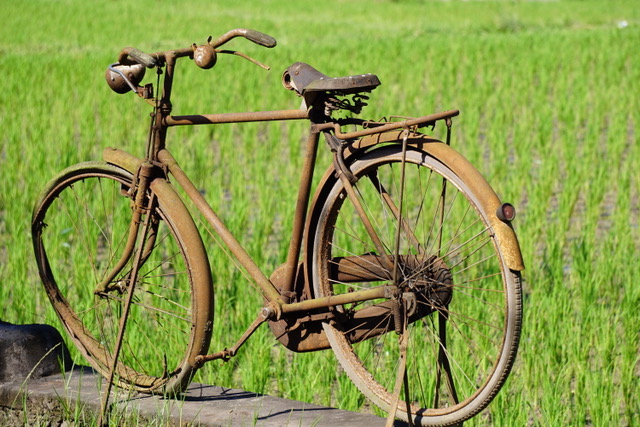 In Bali, people work so hard, then use most of their meager earnings in worship. Their hearts are pure, they live with great peace, and so much love. Nothing is wasted. We have much to learn from this culture and these beautiful people.