Our adventures began at 7:30am when a large van pulled up outside our villa, and we loaded in like socks and underware stuffed into a tiny drawer. We had signed up for a cycling tour. Our $25 would take us off the beaten path on a wonderful, intimate journey through Bali countryside, and included breakfast, lunch, lessons on coffee production, rice paddies, the Hindu beliefs and untouched villages.

Our first stop was the Luwak Coffee farm. Though I’m not a coffee drinker, I had heard of some crazy little meerkat kind of creatures that were fed coffee beans and pooped out $100 cups of coffee! Well folks, I’m here to tell you that it’s true…these little civet cats are a nocturnal tree cat in Indonesia and feast on the coffee berry. They can’t digest the hard stone inside and poop out the little ‘gold nuggets’ which are gathered, washed and roasted. Supposedly the process “lowers the bitterness…imparting a musky smoothness.”

Jude decided that she was going to start eating the coffee berries and selling her poop to make make some extra cash on the side. If anyone is interested in an order, please contact us. We can enlist all the creatures if bulk orders are needed.

A couple trays of tea, hot coco and coffee samples were placed on each table, and visitors from all over sampled to their hearts content. 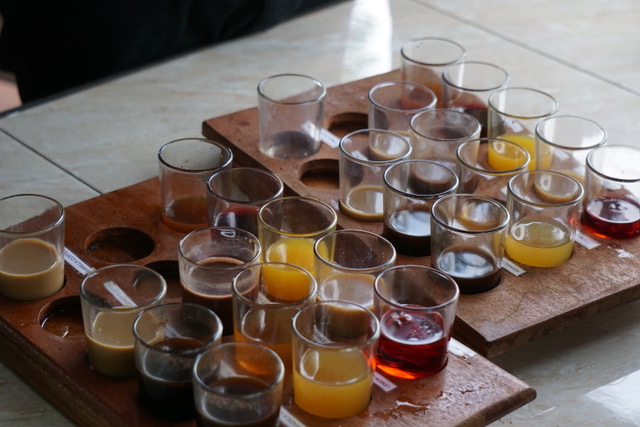 Cups of steaming or iced coffee was served to those who ordered for 100,000 IDR, which is $7.50. A pretty high price for a drink in this part of the world. In New York these same sized cups of coffee are sold for $100 a cup.

Our friend, Daniel, ordered coffee that was brought to the table looking like it was straight from a science lab. We watched in great anticipation as the water heated in the lower glass ball, boiled and worked its way up into the coffee chamber above and then filtered back down into the ball as a dark brewed concoction. Daniel doctored with a little milk and sugar and loved it.

With new coffee knowledge in our brains, we continued on to Kintamani Village, where we were served banana pancakes. The best part was the view of Mt Batung, which is a semi active volcano.

The volcano spread out across the valley to the edges of Lake Batur.

After enjoying the views we continued on to our drop off point, where we were met by Adi, our cycling guide, who constantly joked and immediately memorized all our names. 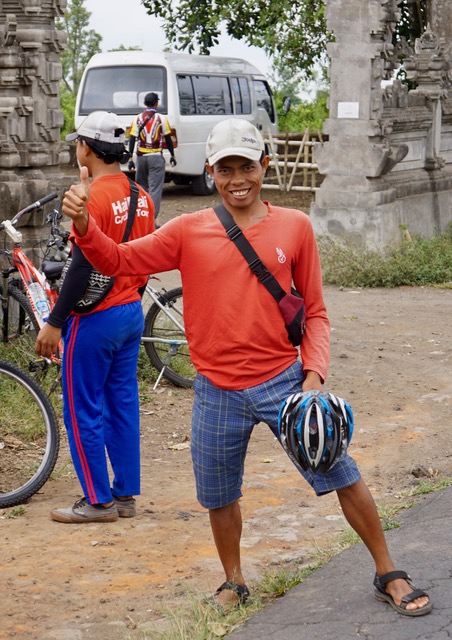 It was there that we were introduced to our waiting chariots, which we mounted and made sure everything functioned well. Especially the breaks! Daniel and Aidan immediately started doing funky tricks and spraying dust clouds as they skidded across the dirt. 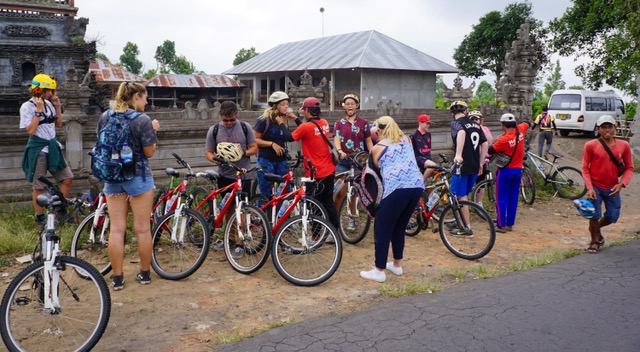 We rode through a wide variety of terrain, including dirt back roads, 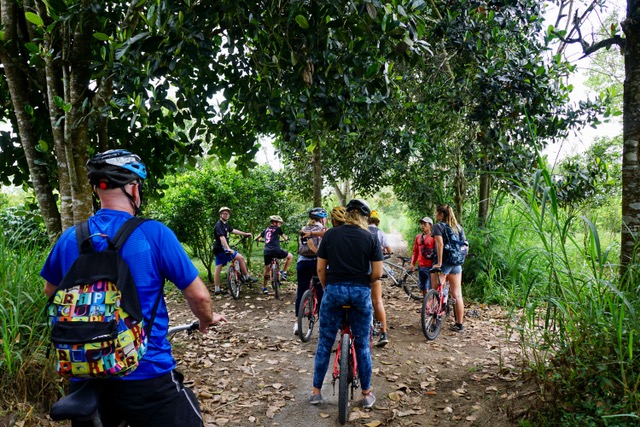 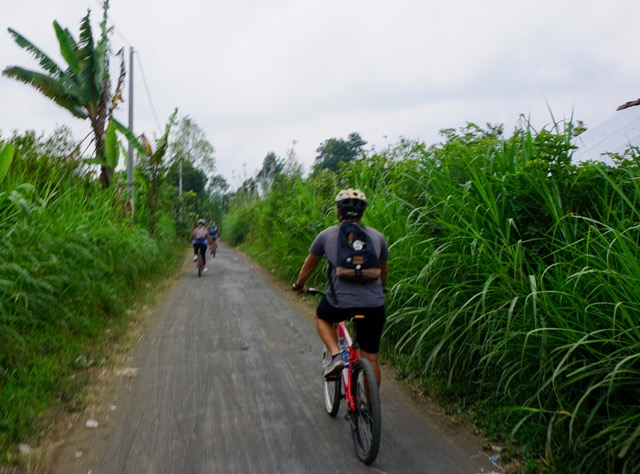 We loved seeing the way farmers use their land so efficiently, growing as much as they possibly could on the land they own. On this lot, tangerine trees tower above thick healthy cabbages, which are neighbors with hot chili pepper plants and any remaining spaces are filled in with peanut plants. All the crops work well together – providing what the other needs for healthy growth, maximizing the yield.

In some areas there were fields of these large hot peppers, and in other fields, grew small even hotter red peppers. 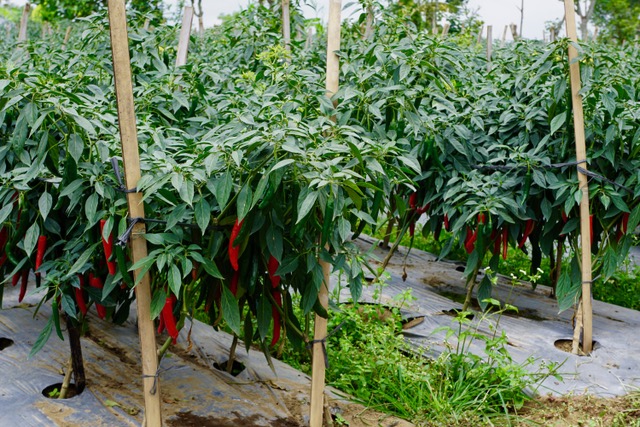 We cycled through several tiny villages, each with their unique temples.

Periodically we’d come across farmers and their families weighing and loading crops onto trucks heading to the city.

I could just imagine the soups, salads and entrees that would be created with these beautiful juicy cabbages.

We passed little old ladies carrying heavy bags up and down uneven ground in the jungle. I wanted to help them all, and can’t believe their strength. 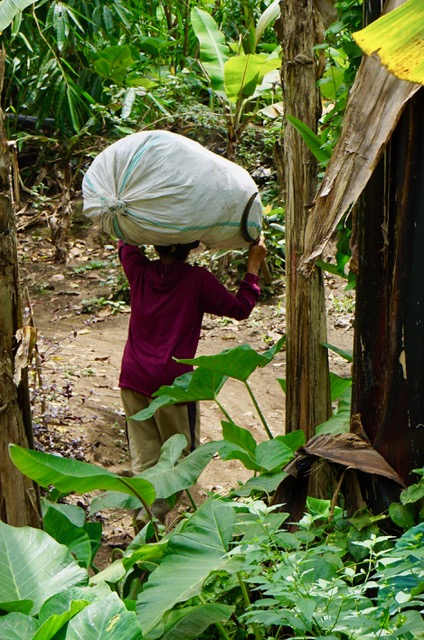 We also passed sweet little old men who got big smiles on their faces when we greeted them in Indonesian.

Some of the villages were larger than others and seemed to have been there with all the same people for hundreds of years. A spell cast. I want to go back and listen to their stories, learn their ways… 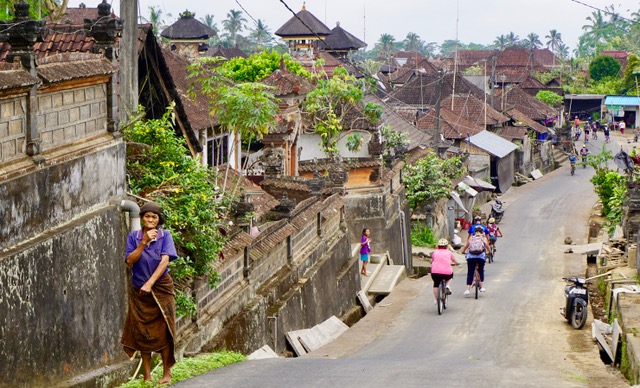 Early afternoon we passed a school bus, carrying excited children who waved and smiled at the weird white people sweating on their bikes.

One of the areas we passed through was where much of the concrete is poured into molds and set for building temples. The structures which are either grey, black or orange in color, are then transported, set in place and further carvings into the concrete are done on location.

Shortly before entering the rice paddies, we came across women in a village drying rice on the road on tarps.

The dry rice was then scooped up into bags and sent to be husked. Adi tried convincing us that at breakfast they all sit around husking one grain at a time!

My favorite part of our entire day was cycling through the rice paddies. Small paths through endless green fields, chimes ringing out across the expanse in the breeze, a coolness in the air…it’s so incredibly beautiful! 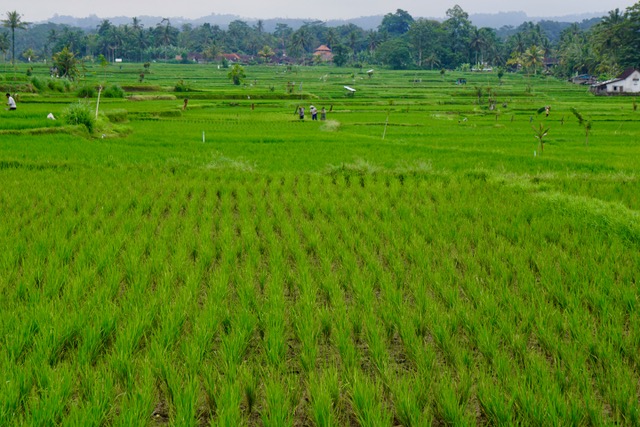 We passed an old woman who was working knee deep in mud in her field, and I asked Adi what she was doing. He said she was weeding. 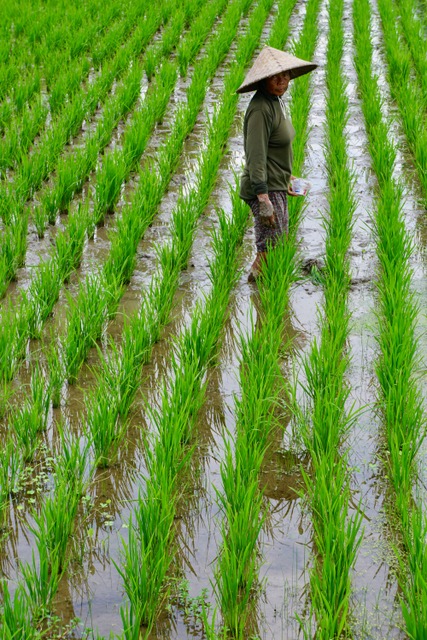 I immediately asked if I could help her, and Adi spoke to her and she nodded her head. Jude and I kicked off our shoes and climbed in! 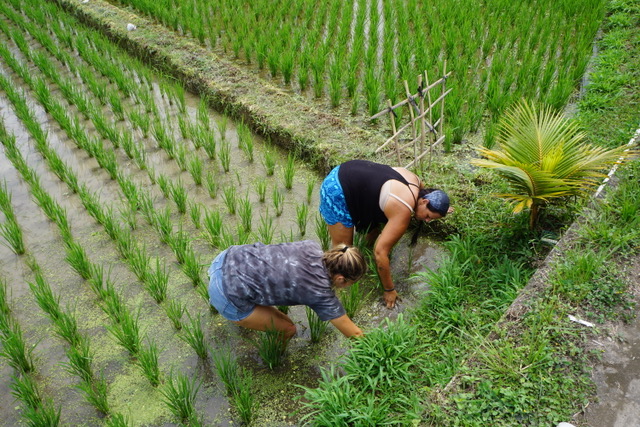 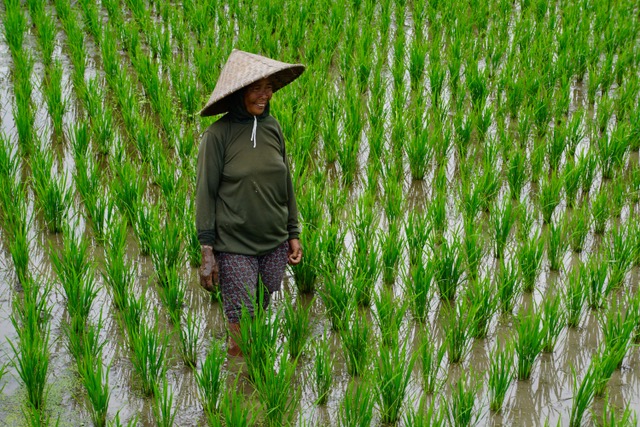 We decided to suck it up and keep helping. The process was to pull weeds, then push them deep down into the mud so they would act as fertilizer. In no time at all our backs were killing us but we continued on. Adi said these people will wake early in the morning, get to work and stay till sunset. 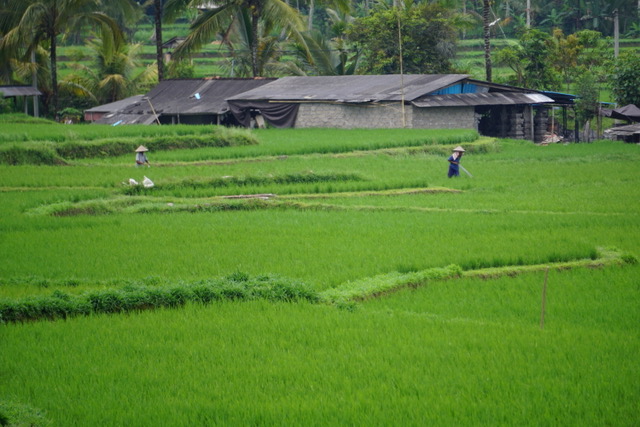 Day after day after day…
We saw the little huts farmers live in, and outside them each family had their alter to make offerings to the Gods.

We continued on through the rice paddies, constantly in awe of the beauty there, and so grateful to be witnessing it.

After 5 hours of cycling, we reached the end in Ubud, where we were served lunch in a beautiful Balinese home. Teresa and I love the kitchen.

We had made friends with a family from Australia, and all sat at the table together.

Lots of deliciousness was served, and we were incredibly hungry! 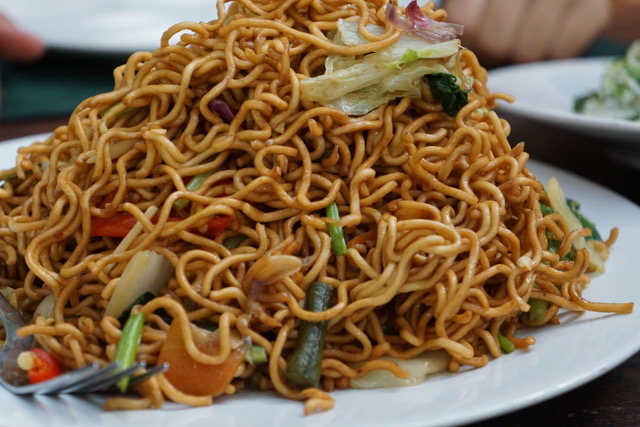 I wandered through the yard, enjoying the peaceful setting and admired the simplicity of it all.

and traditional things around the grounds. 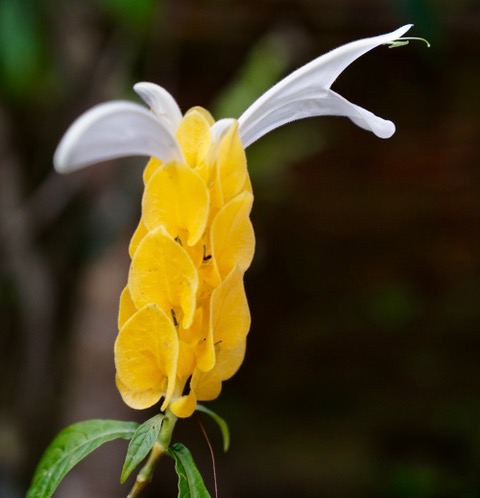 Many alters stood in the garden where offerings are made daily.

In the center, out in the open, is the bed that is slept in the night before some of the more sacred ceremonies.

I could not imagine spending the day in a more beautiful place! 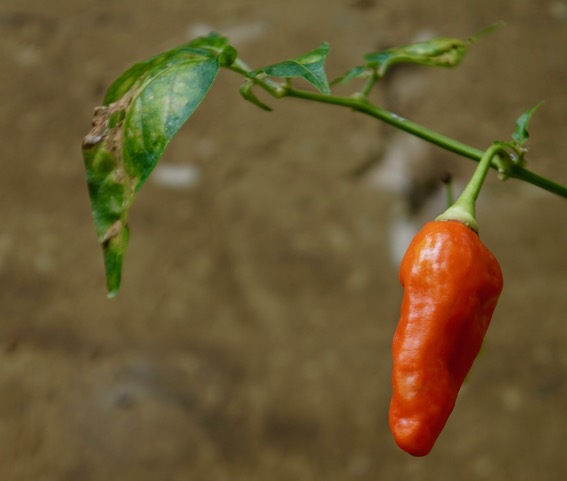 Bali is so beautiful. The people here are wonderful. It’s an amazing place to call home.