The past four months have been quite the whirlwind! I’ve wanted to write several times, but due to the medications I’ve been on, was unable to think straight long enough to write anything that made sense.So, here’s how this whole adventure has transpired…

In August, Mycah and I traveled to Nebraska to visit our sweet family. Zailyn has grown so much and seeing her, Hunter and Nonna, was so wonderful. We were planning on being gone from Phuket for a couple weeks, but an entirely new unexpected adventure awaited us…

For so many years now, I have experienced intense lower back pain, and due to the combination of my stubbornness and high pain threshold, have put it out of my mind for far too long. After years of powerlifting, horse back riding, running track barefoot, cliff jumping, and living life to the fullest, the damage I have inflicted on my poor spine, had finally caught up with me. After the 26 hours of travel to the US, my back had finally had it and may sciatic pain was through the roof. Mycah managed all the luggage and pushed me in a wheelchair through the airports. Once settled in Nebraska, a friend of mine who is in anesthesia and living in Yakima, Washington, suggested I travel there to meet with a colleague who is a Neurosurgeon.
After spending just a short time with our angels in Nebraska, we hopped on an airplane to Yakima, figuring we’d be there for a week or two…

Our friend, Jeff Follis, picked us up at the airport and he and his sweet wife, Susan, invited us to stay with them in their home in Yakima. Jeff gave me an epidural that evening right there in their kitchen, to try tide me over till my appointment, and I received a few hours of relief, then continued to experience the intense pain that had me walking completely bent over and leaning to the right.

Dr Meirelles, who owns and practices at Northwest Neurosciences in Yakima Washington, has been an answer to prayer. He is the most knowledgeable, thorough, compassionate doctor. When in the exam room with him, I felt like I was the only patient on his schedule, and had his absolute undivided attention. After an MRI, X-Rays and examination, he helped me understand exactly what was going on in my back and gave me options for treatment and explained recovery of each. In the mean time he had started me on medications to help relieve the pain.

His diagnosis was that I have Spondylollithesis, Radiculopathy, Scoliosis, Bulgining lumbar discs and Ruptured lumbar discs.
The Spondylollithesis is when vertebra slip, which is a defect of one to both wing shaped parts of a vertebra, and can result in vertebra slipping backward or forward over a bone below.
Radiculopathy is when one or more nerves are effected and neuropathy occurs, which results in in tense pain, weakness, numbness and/or difficulty controlling certain muscles. I was experiencing foot drop because of it, and over the top excruciating pain.
Scoliosis is a condition where someone has a “S” or “C” shaped curve to their spine. Mine is “C” shaped.

The staff worked literally day and night to get me pre approved though our International Insurance which is based in Hong Kong with offices in London and who knows where else, and helped Mycah and I feel completely at home and taken care of.

After informing Dr Meirelles that I would really like him to go ahead and fix all of it at once, he explained the expected length of surgery, that it would actually take two surgeries, 4 or 5 days apart, and that recovery would take about a year. I had absolute complete faith that he was the doc for the job, and I wanted him to start ASAP.
From the time he prescribed the medications and I started taking them, to several weeks after the surgeries is a bit of a blur because I am not a pill taker, and was in ‘Lala land’ for all of it, but I do remember all sorts of fun and exciting events taking place while waiting for the insurance to approve the surgeries…

For Mycah’s 19th birthday, her and Jeff went skydiving. He took a special class allowing him to jump solo, and Mycah jumped tandem. Both of them loved the experience!

Jeff and Susan introduced us to amazing things, like MOD Pizza, and drove us through gorgeous countryside and to a wonderful little town where a huge market/street fair was taking place. They pushed me around in a wheelchair and while Mycah dyed her mouth and organs blue with cotton candy, I devoured kettle corn!

Mycah and I fell in love with Washington! We loved seeing hundreds of acres of orchids and vineyards, and the quaint barns and fruit stands selling boxes of delicious, crisp apples and pears. 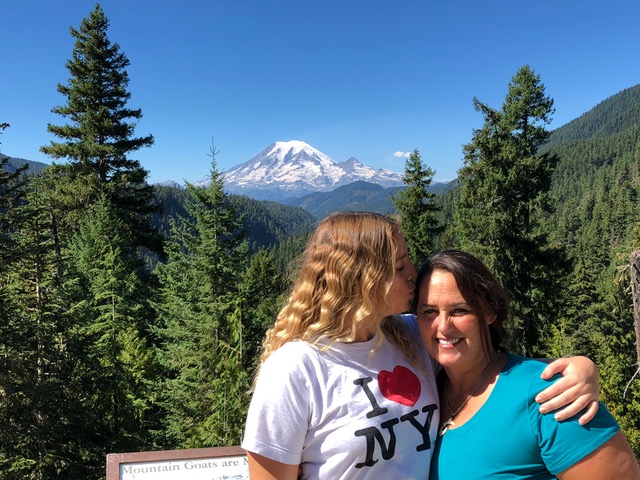 As time passed we could see that due to insurance approval taking forever, we were going to be there much longer than we thought. I also had no idea that my back was as bad as it was, and knew that staying longer in Dr Meirelles’s care was going to be important. I spoke with Danny and the twins who were back in Phuket, moving our belongings into our new rental home, and we decided that we’d fly the twins out to where we were.

I had many pre op and post op appointments as Dr Meirelles tried to keep my pain at bay until he could operate. The staff were filled with compassion and kindness, and so were Jeff, Susan and Mycah. We communicated regularly with Hunter and Nonna in Nebraska and described how wonderful the area was that we were in, which got them talking more about moving out there.

Finally it came time for surgery. I was in such overwhelming pain as I climbed up on the table. Dr Meirelles looked at me with great compassion and reassured me that when I woke up, pain would be considerably less and I would be able to stand taller. For 11 hours,Dr Meirelles picked through contorted, delicate bundles of nerves and disk material, freeing up the nerves without damaging them. As part of the surgical team, another doctor placed sensors along my nerves and his job was to monitor them and inform Dr Meirelles if he was getting too close to the nerves. Our friend, Jeff Follis took care of anesthesia and did an extraordinary job, and so did the nurses and other members of the surgical team.

After laying in recovery, Dr Meirelles took my hands and helped me stand, and for the first time in many many months, I was able to stand at my full 5’8” height, and standing there, I was in no pain at all. The big test would be, once medications from surgery had worn off.

While I had been under anesthesia, Danny, Mycah and my beautiful Mom had been chatting on the phone, and had decided to fly my Mom out to Yakima to help with my recovery. There’s nothing like being in your mothers arms when you’re not feeling good. Mycah took care of my every need. She gave me medications night and day at their scheduled times, drained the bags of blood that hung from tubes entering my body, helped me to the bathroom, and got me to and from the doctor office. She is truly an Angel.

Four days later I was back in surgery for another 7 hours, at which point bone grafts from my own body as well as a cadaver, were placed, and also cages, rods and screws – all securing my S1, L4 and L5 in place. Between my pacemaker and the added hardware, I felt even more like a bionic woman! A fragile one for now and the next year, but bionic non the less!

3 thoughts on “Catching up…Our trip to Nebraska and Yakima”

Glad you are feeling better!
I also suffer some pain in my back but also understand how important it is to be out and about while recovering.
If you would like to get out let me know! I run an ambulance company and can free one up if you would like to move around in moderate comfort

Thank you, Eric. I’m sorry to hear that you can relate to back pain…it’s amazing how debilitating back pain can be.
We have actually finally made our way back to Thailand now, but thank you so much for your kind offer. How about, if ever you are in Phuket, you let us know, and we’d love to have you stay with us!

We can be in Yakima in 6 hours