Our adventures took us to a beautiful secluded place, far back in the jungle. As we drew near, we read a sign that said a Shaman lived there, and we needed to be quiet and respectful.

Due to the reverence of the location, we were surprised to find how brightly colored it was painted. Murals in a rainbow of colors covered the walls.

We admired the creativity.

Each of us were told to pick a stick of bamboo with colored stripes and a feather, from a basket that the Shaman was holding.

As we quietly walked we were to meditate and think of something significant we wanted guidance in or wanted to feel peace about, and then at a certain point, we were to push the bamboo into a special place that would be shown us, into the earth.

As we crossed a drawbridge, we could smell fresh tortillas being cooked… 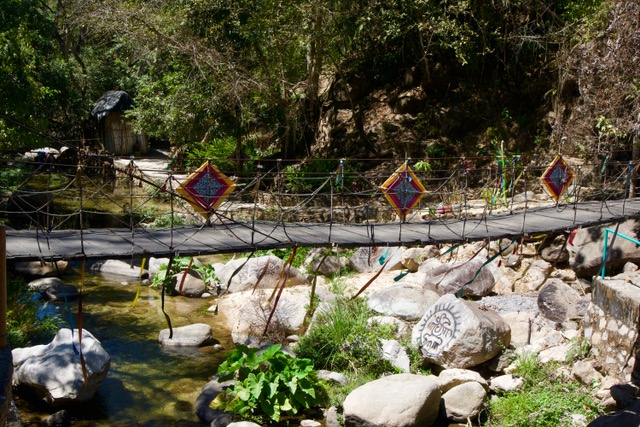 A building on the other side opened up into a beautiful place to eat and rest, and a woman stood pressing tortilla dough, then cooking the perfect rounds on a hot pan. We were told to eat to our hearts content. 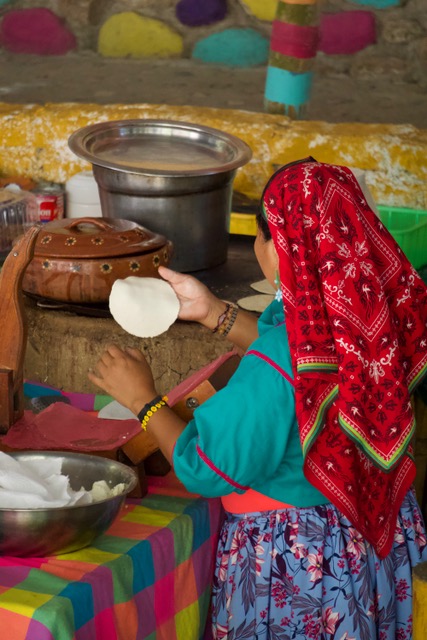 Just above her and off to the side, was a stationary bike which had a blender attached to it. If they wanted to make a smoothie, someone had to jump on and pedal to make the blades turn. Genius!

and a beautiful little girl with equally colorful clothing and beaded jewelry, watched us gringas with great interest!

A man dressed in leather and feathers emerged from behind some rocks, and blew into a conch shell, 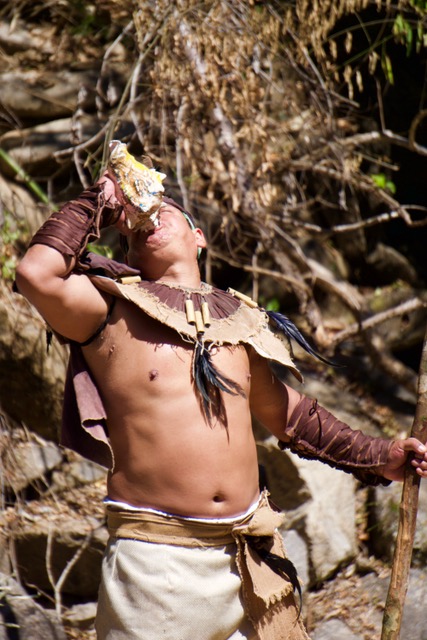 and was soon joined by an older man who carried a smoking bucket of burning sage and a handful of plants, which he waved up and down as he melodically chanted. The rich smell of herbs filled the air.

During this time the little girl wandered into the stream and watched as she held her dress high above the water.

We enjoyed a beautiful, peaceful afternoon in the shade and resting our feet in the coolness of the water.

When we finally returned to town, we wandered along the Malecon for a while. 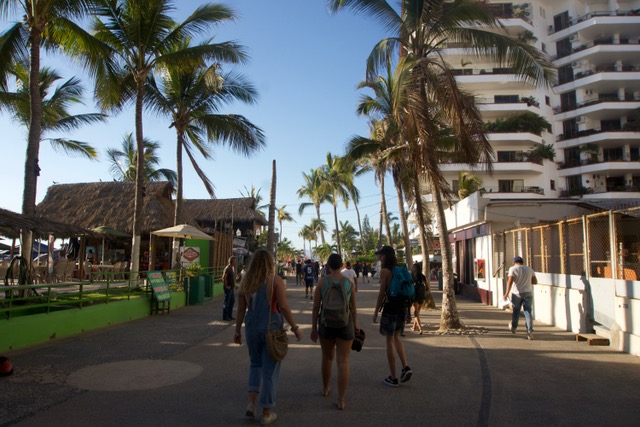 The Malecon is a mile long stretch that runs along the beach, down town Puerto Vallarta. A wonderful breeze constantly blows off the water and cools the never ending sweat on our faces. At one point the broad path crosses over the river, where people often come to swim during the day.

and many gorgeous bronze statues stand tall and proud, ready for photographs.

Some of them are fountains…

Each town in Mexico has the traditional large lettering name, where visitors flock for pictures.

Huge arches stand as a backdrop to an amphitheater across from the town square, framing the Hotel zone of Puerto Vallarta in the background.

A crowd gathered right at sunset to listen to and watch the traditional Danza de los Voladores (Dance of the flyers), where dancers launch themselves from a 30ft pole, and spin while hanging upside down and playing flutes. The ritual was originally presented to ask the Gods to send rain in times of drought. 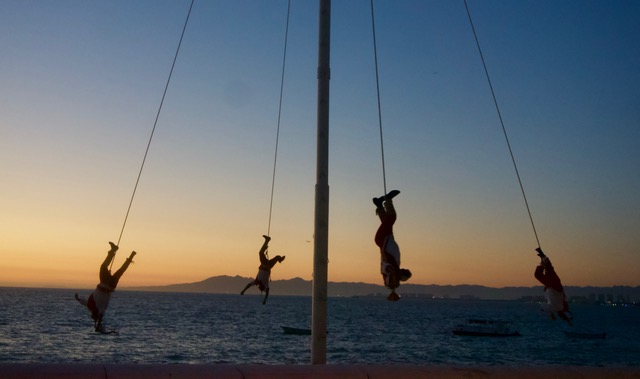 We continue to love Mexico and her people. We love where we are staying in La Aurora, where taco stands lines the cobbled streets in the evenings, 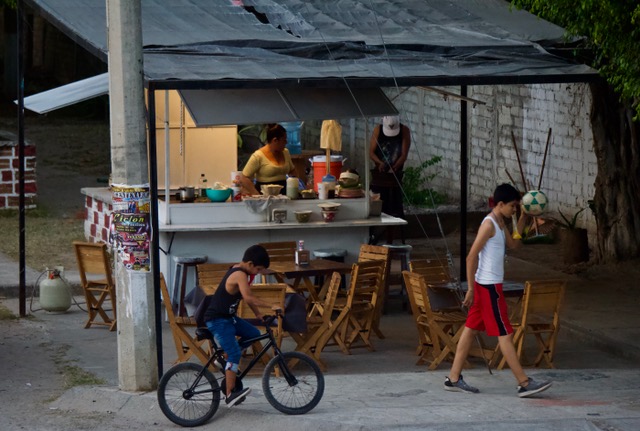 and everyone is humble and friendly. The world has much to learn from the people here…they know how to laugh out loud, take good naps, make and eat delicious food, work hard and love their families. Life is good, and the adventures continue… 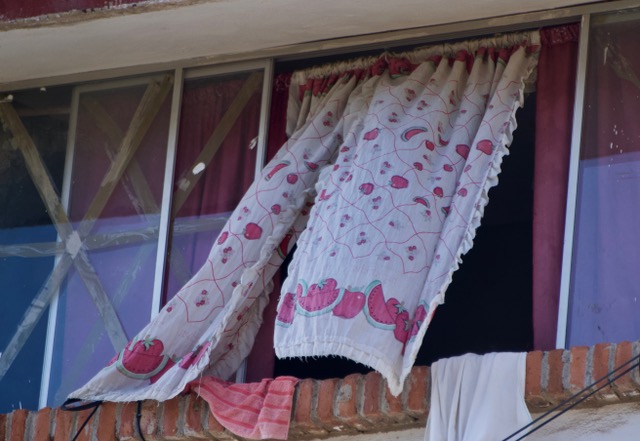 When I look at an arial view of meandering rivers branched out and eventually combining to form one – which ultimately leads to the ocean, I feel like it represents a diagram of my life. I have walked and camped along so many streams, rivers and lakes, and they along with that inner compass in me, seem to lead me to the ocean every time. It’s where I feel most peace. The ocean heals me. It’s my watering hole.Having reached yet another crossroads in my life, I found myself doing the same that I have done before…taking my children and finding a magical place by the ocean where we can immerse ourselves in a new culture and dip into a new place in the sea. Our choice this time, was Mexico. 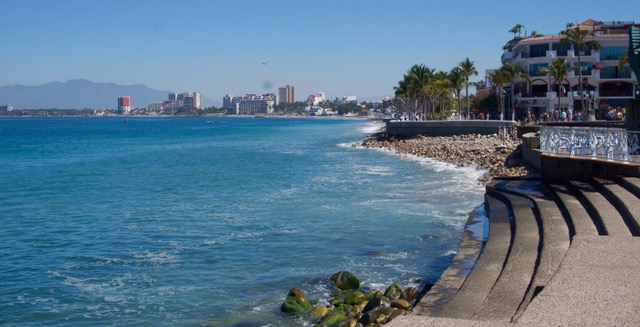 Puerto Vallarta is situated on the coast of the Pacific Ocean’s Bahia de Banderas. There’s one road into town and one road out, and on one end is the police headquarters and at the other end is the military base – which makes it a pretty safe place to be.

This beautiful town lies at the foot of the Sierras Cuale and San Sebastian, where three rivers flow through, the Cuale, the Pitillal and the Ameca.

One can never be too sure if the photos on lodging sites are accurate or not, and for the most part over the years we have had good luck. When we reached our apartment this time, however, we stood outside with our bags, took a deep gulp and nervously smiled as we looked at the exterior. It appeared that we were in the armpit of Vallarta, La Aurora – otherwise known as L.A. by the locals. Our Uber driver cautioned us to be careful and to stay in at night.

We found the right floor, made our way through the locks, deadbolts, gates and doorway, and stepped inside what would be our home for a couple of months. The kids and I looked around at the mustard colored couch, the closet sized kitchen with a leaky faucet and the broom closet sized bathroom. We peeked inside the two bedrooms that each had a full sized bed in them – one of which was slightly bowed in the middle, and bust out laughing. This, was going to be an adventure for sure! 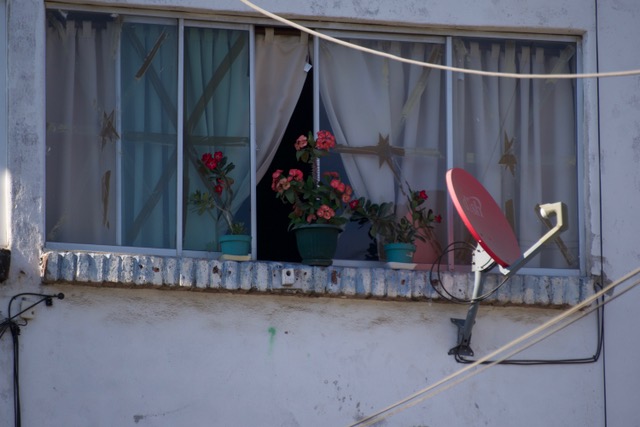 We were not above this. We would fill this space with love and laughter, and it would be the base camp for adventures and new friendships and allow us a place for soul searching, meditation and growth. Our hearts were filled with gratitude that we had a roof over our heads and a place we could shower! 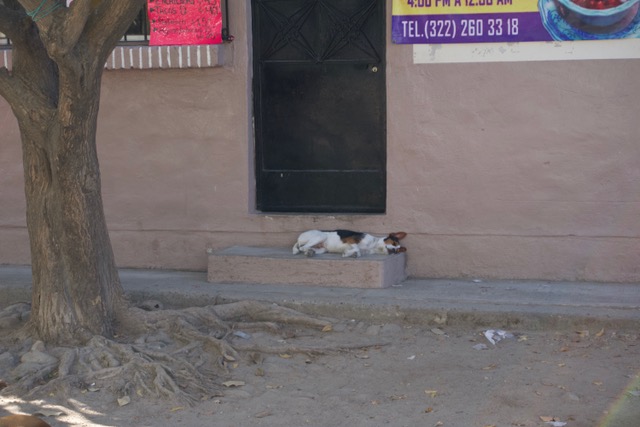 Mycah and I immediately bonded with all dogs in the neighborhood, we spoke in friendly voices to our neighbors, who we could hear clearly through the walls, and began exploring. We love the fact that we live in the heart of where the locals are, and where all the 15 peso taco stands are. The food is authentic and the people are real. Their huge smiles and welcoming hearts have made us feel right at home.

Our first adventure took us to a beautiful Cathedral, ’Señora de Guadalupe.’ It is one of the most important monuments of the city and the spiritual center for Catholics in town – which happens to be 99% of the residents.

Bells are rung by sextants 30 and 15 minutes prior to each service. Foundations for the church were started in 1903, and for the following 18 years, various sections were built and used then added on to – finally ending in 1921. 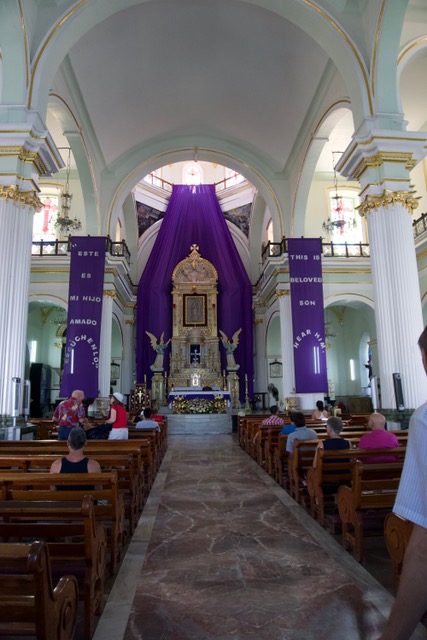 We sat quietly inside and soaking in the reverence and beauty, before continuing on farther into the Old Town.
Outside, vendors called out special prices and and flags flapped in the ocean breeze. 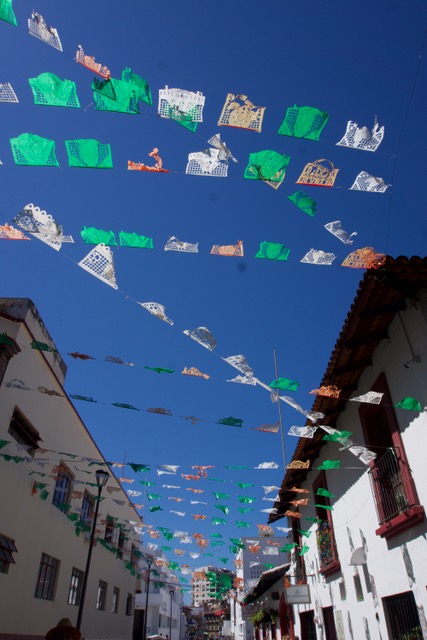 Mariachi bands played and dancers braved the heat as they whipped their skirts around and periodically clapped and stomped their feet.

Jewelry stores line the streets of the city, with locally mined fire opals brilliantly glimmering in gold and silver settings. In some stores, workers sit with blow torches In hand and patiently work the materials into sellable settings. 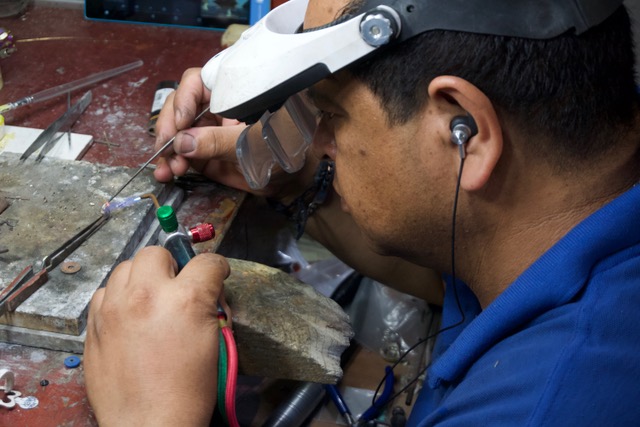 The streets of Puerto Vallarta are cobblestone, all harvested from the coastline. It makes walking with a cane quite fun as I pick my way over lumps and bumps and enjoy the picturesque setting of it all.

Tequila is also part of the bread and butter for Mexico, and since I’m not a drinker, I didn’t know anything about the process or
product.The Blue Agave plant is what Tequila is made from.

The volcanic soil is well suited for growing the plants, and over 300 million are harvested each year. Agave grows differently depending on the region, so in some areas it is sweeter and in others it is has more of a herb flavor.
Men who harvest the plant are called jimadores, and have an intimate knowledge of exactly how the plant has to be harvested – passed down from generation to generation. 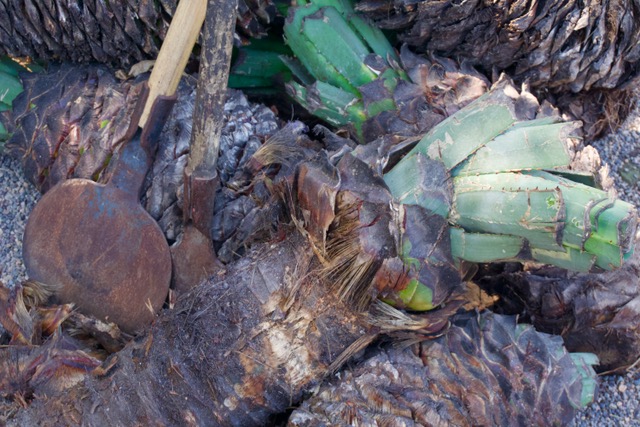 The quiotes, which are several meter high stalks that grow from the center of the plant, and are regularly trimmed so that it doesn’t flower and die early, allowing it to ripen fully. Once the Pina, or core of the plant is ready for harvest, they average around 150 lbs in weight, and in the lowlands they can reach 240 lbs. The pinas are transported to an oven and slowly baked then shredded and mashed under a tahona, or large stone wheel. The pulp left behind is used as compost or animal feed, the extracted liquid is placed in fermentation tanks and the leaves of the plant are beaten and dried and the long fibers then used for making ropes etc.

There are over 1000 tequila brands and they all seem to have a devout following.
We are excited to continue exploring and learning about this beautiful country. Until then, we’ll be eating tacos and drinking horchata out on the street with the locals….