Our first few days here in Xiamen, China, have been amazing.

Xiamen is an Island in the Fujian Province of China, and is the 8th largest port in the country . The name Xiamen means “door to the house”, meaning, the gateway to China.

Jude and Caleb have been living here for the last 4 months, and it has been wonderful to be with them again, and of course, it is great to be reunited with the twins after their month in Barcelona. Jude has taken us to some crazy interesting places, which I’ll write about in the next blog…
We took a stroll during the last few minutes of a small typhoon, and enjoyed the ‘breeze’ and precipitation. Broken branches lay scattered on the sidewalks, and some areas on streets, parking lots and sidewalks were deep with sewage smelling water.

Motorbikes and gas scooters are banned here, so electric scooters and bicycles are used in great abundance, and riders seem to have right of way in any area and direction they please – whether it be against the flow of traffic or on the sidewalks. Even with this in mind, traffic is far more orderly (and quiet) than Thailand and Indonesia.

Danny arrived in Xiamen 24 hours after I did because the airline messed up on his ticket, and once rested we took him on a walkabout as well. China has many large open areas that come to life at night – when temperatures have dropped. Older women danced with brightly colored fans, little ones chased each other around on scooters while parents chatted, and a little girl twirled around with a long ribbon. I kept thinking about our sweet granddaughter and how much fun she would have exploring with us.

We passed a gentleman selling dried fruit that resembled prunes, and purchased a handful out of curiosity. The texture was much like a prune but the taste was more like dried cherries that had been soaked in something…I’m still not sure how I feel about the taste, but I did enjoy the new experience.

We also stopped by a small store where Jude purchased fresh ginger and mushrooms to add to a stir fry. I’m impressed by how much Chinese she knows already. 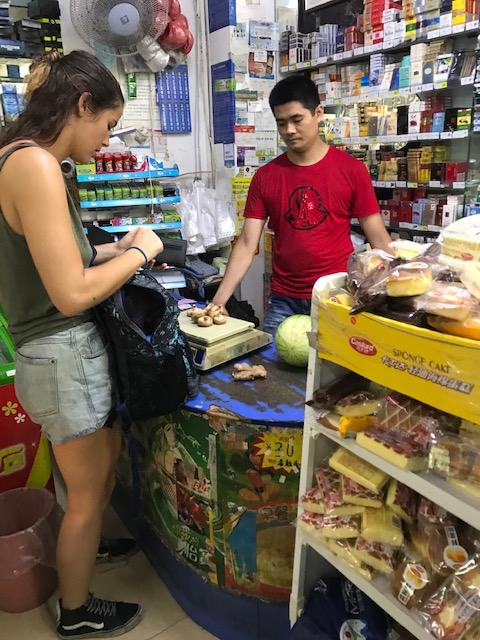 The store shelves were packed with dried legumes, rice crackers, and biscuits and on the ground were open boxes of various dried noodles.

The produce area consisted of mushrooms, bok choy, cilantro and many other greens. 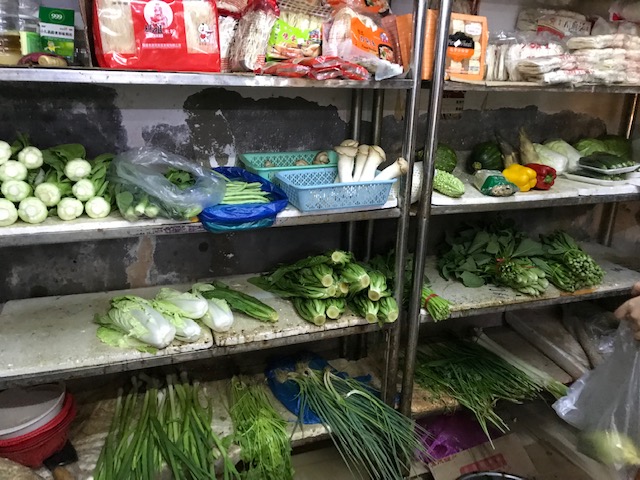 We stopped at a cafe to grab some lunch, and were introduced to the fact that cash is not widely accepted. An app called WeChat is used to order and pay for food. Each table has a small plaque with a barcode on it, and once seated, guests scan the barcode with their phone, which brings the menu up on the phone, and you place your order and are billed to your WeChat/WePay immediately.

It’s pretty bonified! It eliminates the need for waitresses, which I’m sure is far more cost effective – yet less welcoming for the company. I’m still not entirely sure what I ordered, but think it was some sort of pork dish….it was delicious. It arrived with okra, corn, kimchee, and soup.

Aidan and Emma have discovered some great skate spots, and have found that since it’s so hot during the day, evenings are the best time to get going. We are so impressed by the beautiful landscaping throughout the city and in the parks.

We plan on renting an airbnb for a month, which will give us a chance to explore the island and decide if we’d like to stay longer in Xiamen, or move on and explore someplace else.
Life is good and the adventures continue!

Glad to see you are still out! I haven’t seen much from you guys over the summer!

These pictures, and your narrative are fantastic!! We’re so glad that your blogging again! I’m sure learning a lot about places I’ve never been. Love you all so much!! Mom and Dad

Thank you, Mom and Dad. We love you both so much.

Hi Eric. Thank you. It’s been a busy summer in the US, and we are back to traveling now…so excited for the upcoming adventures.