One of the many things I find so endearing about the Chinese, is how they go about translating to English. Most businesses, menus, packaging, instructions etc, is written in Chinese, so we really appreciate the rare English text. This sign is above a convenient store, welcoming visitors, and as you can see, it reads “welcome your visiting.” I love it. 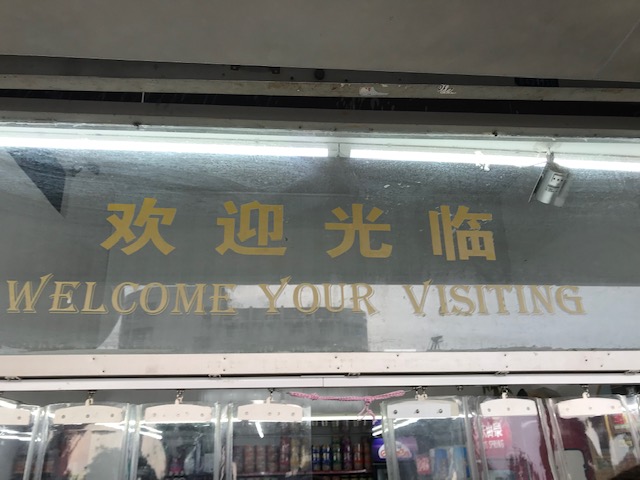 Before coming to Xiamen, Danny bought be a priceless gift in the form of a handy dandy little translator. It’s about the size of a small cell phone and we can push a button and talk into it and it repeats what we said in any of 61 languages. We can also take a photo of text with it, and it will translate the text into the language of choice. It’s been a life saver so far, and extremely clear and accurate.
Many eating establishments have pictures next to their dishes, so we try find those when we eat out, so we can pick out food to order that will be pleasing to the pallet. Here, Danny is picking out his dish before entering.

After being seated, we were each handed our cutlery – all shrink wrapped in plastic. 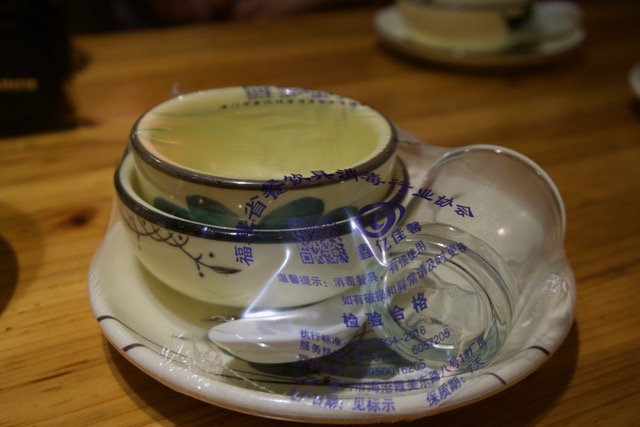 Along with these wrapped packages, we were handed a silver pot of boiling water and a plastic container with a long handle so that we could wash our dishes and utensils before eating. 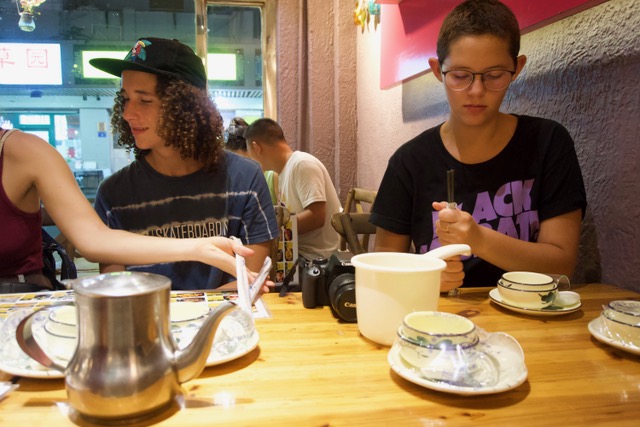 Our glasses were the size of shot glasses. I wasn’t hungry, but ordered a large fresh mango juice, and it arrived in a tall pitcher, which we all ended up sharing. 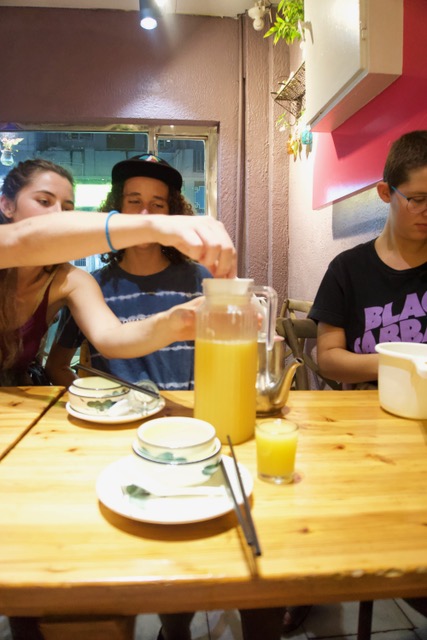 Many of the restaurants have huge fish tanks with live sea creatures swimming around in them, so guests can pick out the critter of their choice to be scooped up and cooked fresh for them.

There are many old buildings around, and most are beautifully lit at night for the abundant night life.

It’s interesting to know though, that it wasn’t until 1980 that China really recognized Xiamen as an important place to invest in and expand, so it has only been in the last 40 years – especially the last 20 years, that the city has been built up like it is. 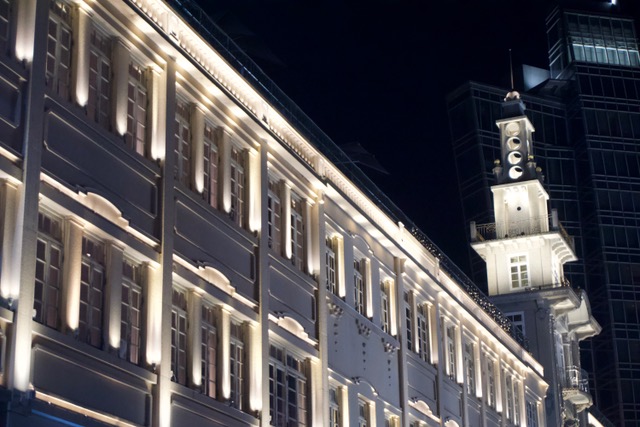 Citizens gather and enjoy the lights, companionship and cooler temperatures at night. 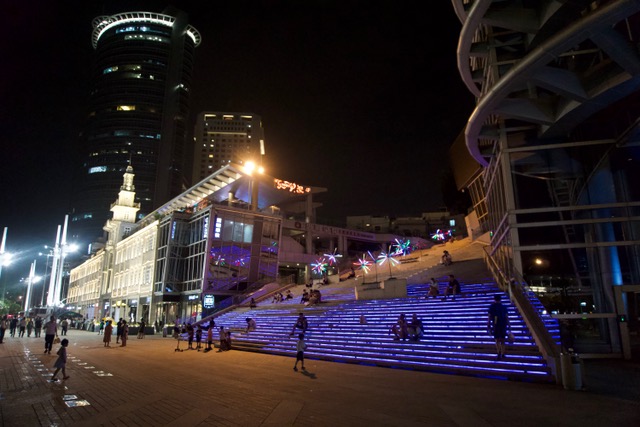 This man had an interesting way of weighing his fresh cherries. Her used a stick with marks on it and a weight, and slid the weight along the stick to figured out the produce weight.

Xiamen is a crazy concrete jungle, but we love the care that has been taken to keep green hills, trees, bushes and flowers in great abundance around the city. 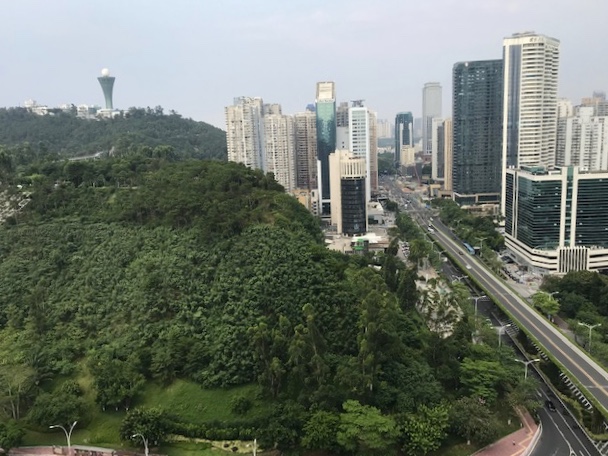 Several waterways lead into the city from the ocean as well, which adds to the beauty among the buildings and roadways. 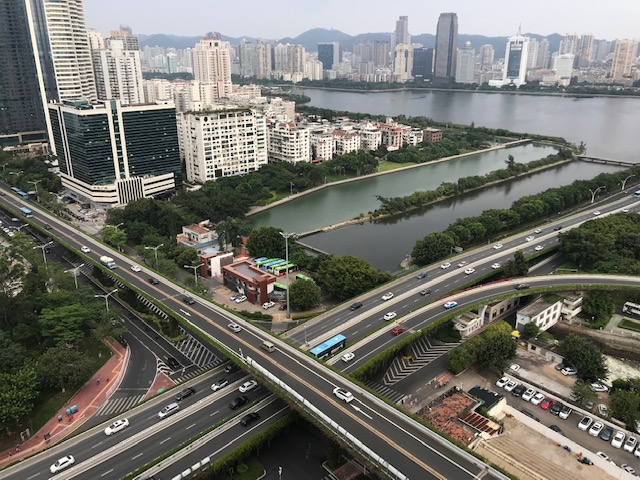 Emma and I went to a huge, modern grocery store yesterday, where everything was so beautifully displayed. Large bins of legumes were so inviting…I really wanted to climb in and play.

Also huge bins of various kinds of rice. I looked around and realized that I was the only one looking at it longingly – wanting to scoop handfuls and feel it between my fingers. I believe our sweet granddaughter, Zailyn, and I, could have tons of fun in the beans and rice! 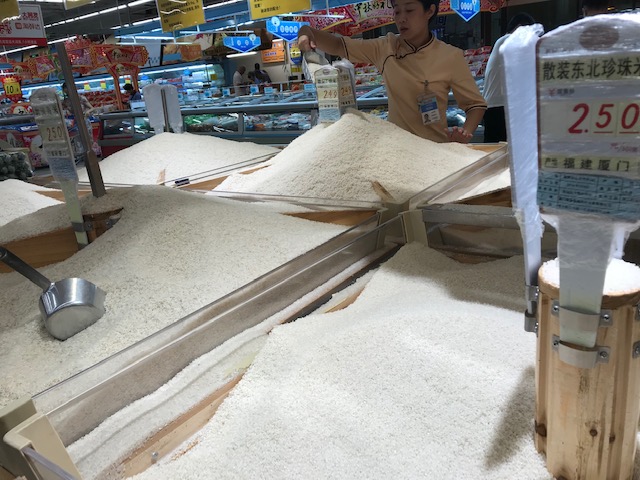 Okra seems to be a huge favorite, and it looks so healthy and fresh! 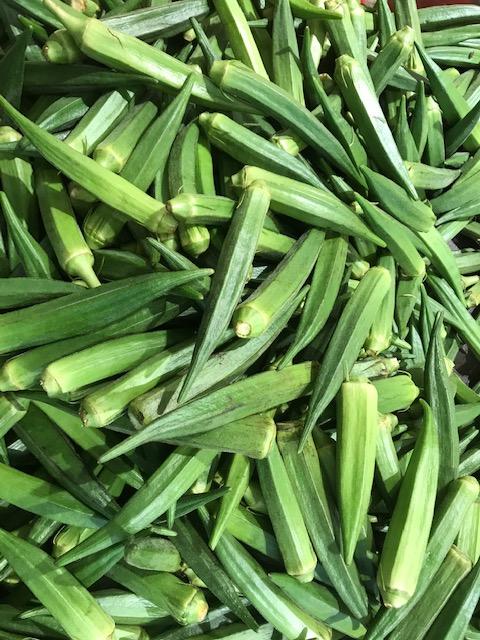 I’m not sure I’ve ever seen such beautiful cauliflower before, either! I am a fresh fruit and vegetable nut and am in awe of the produce.

Beautiful tanks also displayed large amounts of shelled creatures for sale. I wanted to buy them just for the shells.

Crabs were tied and neatly lined,

and frogs sat silently watching shoppers pick out and bag up live eels, fish and their froggy roommates.

Today we will be exploring an old fort, called Hulishan Cannon Fort. I’m excited to take lots of photos, learn and blog about it.