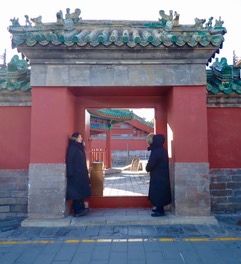 Yesterday Lauren and I visited the Temple of Heaven, which is in the southeastern part of Beijing, called Dongcheng. The complex consists of many temples arranged in three main groups, and the first we saw was for sacrificing animals, and was built in 1420.

Animals were slaughtered and burned as sacrifice to Shangdi, the Supreme Deity.

Six of these large bowls were used for burning the sacrifices in – a practice called Border Sacrifice which ended in 1911. 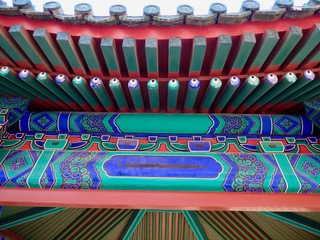 All the buildings in the complex were intricately painted and well maintained as a sacred place for Emperors of the Ming and Qing Dynasties to come annually and offer prayer to Heaven for good harvest. 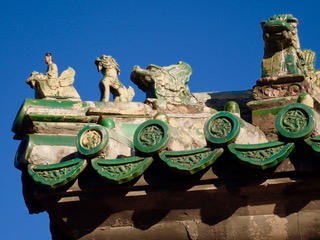 It was interesting that sitting on the railings in one of these hallways in particular, were hundreds of people gambling.

Many of the people were quite animated as they played.

The Hall of Prayer for Good Harvests is a triple gabled circular building, and is where the Emperor prayed. The building is wooden with no nails

The interiors of all these buildings are very simple. 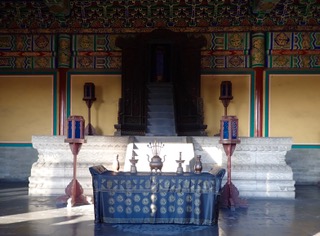 Further hallways led to the Imperial Vault of Heaven.

The building is built on marble. Number nine is a sacred number and many balusters, carvings, altars and pillars are arranged in series of nine. 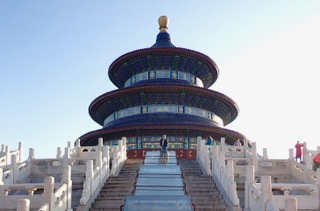 Beautiful giant red doors stand tall at many of the entry and exit points between buildings.

An interesting area was called the Echo Wall, which is an area that was supposed to help the prayers communicate with Heaven through resonating against guardrails. 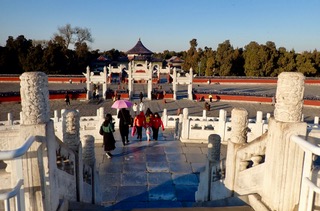 Red and yellow are significant in the Chinese culture. Red is the symbol of prosperity and represents good luck, joy and happiness. (Not to be worn to Chinese funerals). Yellow, or gold, is considered the most beautiful color and is used for Royalty and is reserved for the Emperor.

These two colors are seen everywhere on the temple grounds. 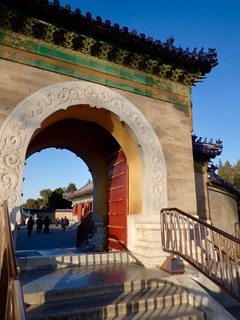 I look forward to visiting more historical places here in Beijing. This place is overflowing with them! We did finally see something other than man made materials – a grove of trees…
I breathed deep, filled my nature craving bank, and enjoyed the site.

2 thoughts on “Temple of Heaven, Beijing”

Thanks so much for your posts. I always enjoy them. So interesting for those of us who don’t know the culture. Safe journeys.

Thank you Barbara. I’m so glad you enjoyed the post. It’s an interesting world we live in, isn’t it.