After a much needed good nights sleep, we loaded back onto Tanda Malaika and set sail in the direction of Bena’s house. Tahi picked up the uke and serenaded us as we traveled.

Bena sat at the stern, looking out over the Makemo lagoon, and when we asked him how he liked sailing, he told us that the big water brings him fear but the calm of the lagoon is good.

As we drew closer to his island, he became so excited and was eager to show us his home, the island that had been his fathers before it was his, and his cousin, Tua, that lives with him. He pointed to his home with a big smile. Tua was fishing on the beach by many beautiful coral heads, and came out to greet us.

We anchored Tanda Malaika a little off shore so she didn’t swing into shallow coral, and she looked splendid! I didn’t tweak the colors in this photo, it’s honestly just that amazing!

Tua immediately prepared coconuts for us to drink and eat. It was so refreshing in the heat. 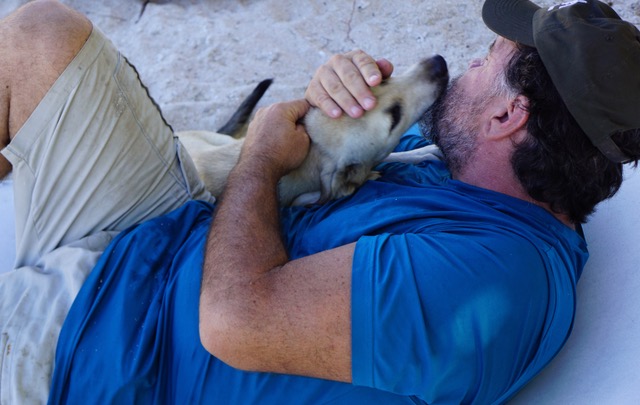 I asked what the dogs eat, and they said their diet is mostly coconut and fish.

We noticed that there were three pots in the water when we tied the dinghy up, and I asked Tahi why the pots were in the water. He said that rather than washing dishes, they put them in the water and the fish pick them clean so they never have to wash dishes. Genius. 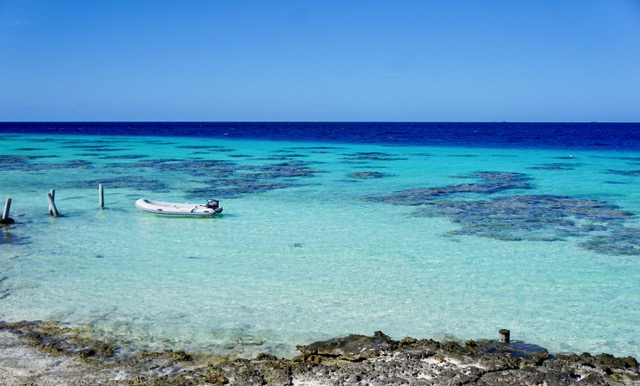 Bena explained to us that the main white house is where they sleep. The hitching post looking thing in the picture below, is where Bena and Tua place all the husked coconut to dry in the sun to sell as copra. At night or if it rains, they use tarps over the wooden posts to keep it all dry. 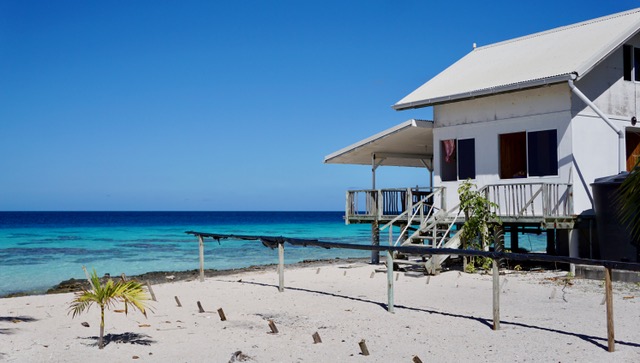 The second building on the property is the kitchen and preparation area. Both buildings are very simple and practical.

Tahi told us that he wanted us to cook a traditional meal with him. He’d show us exactly how everything is prepared. We told him we would love that, and he immediately put us all to work. The first project was to prepare the fire pit. We dug a round hole in the ground with a flat bottom, and placed coconut husks around the outside then palm leaves in it. The leaves were arranged so they pointed upward around the edges and in the center. Additional sticks and cut up palm leaves were arranged inside. 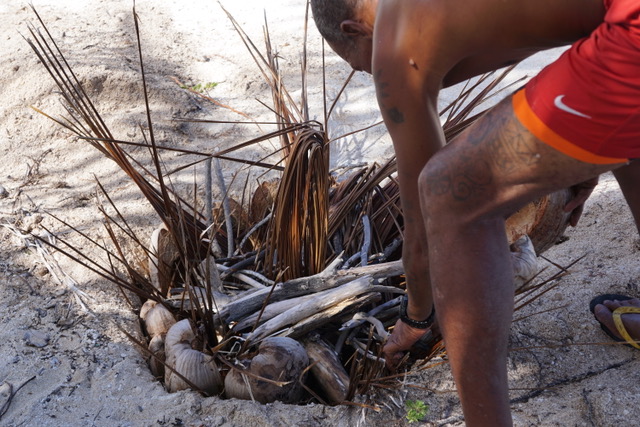 As we built things up we added a higher layer of coconut husks around the outside rim, then more sticks etc in the center.

Tahi then told us to collect large chunks of dried coral, which he paced all over the fire pit on top of all the sticks – this was to hold the heat once the fire had died down and also to provide a solid base for a cooking surface. 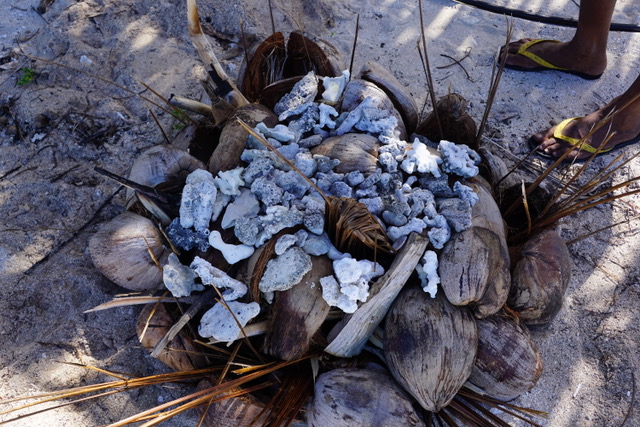 We then collected small pieces of coral and arranged the pieces over the entire surface to fill in all the gaps. The fire was lit and we moved over to the table for food preparation. Tahi showed us the correct way to open a coconut and the best way to get the coconut water out. 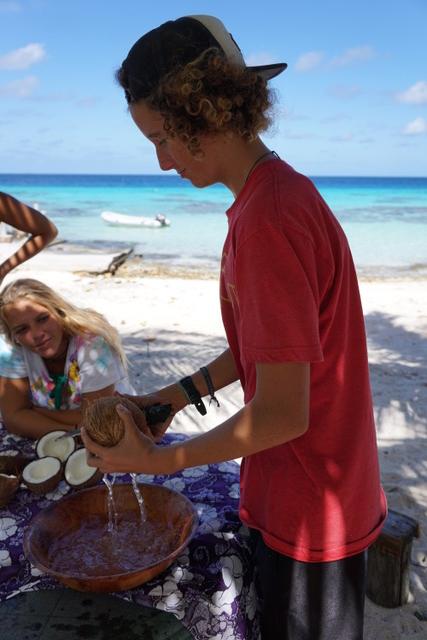 We each took turns and became pro’s. Tahi wanted to teach us how to make coconut milk, so we opened several and placed them on the table.

He then brought a wooden board over for one of us to sit on, and at the end of the board was a piece of serrated metal which had been tightly secured. He showed us that if you scrape the coconut over the metal it shaves small pieces of coconut off and into the bowl of coconut water below, Mycah tried it first…

After a while Tua took over and before long we had a bowl filled with thinly shaved coconut. The mostly empty shells were added to the fire. 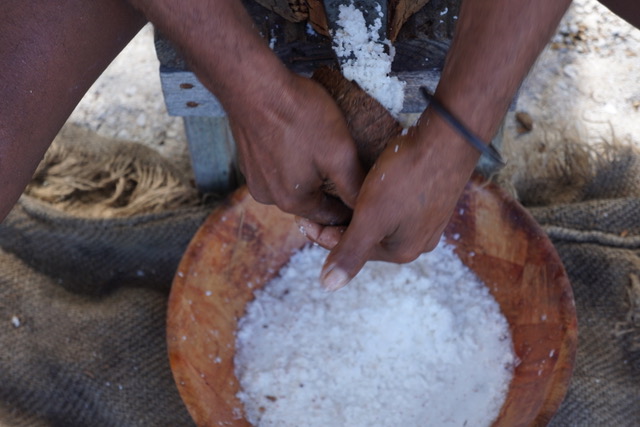 This mixture was stirred up and we let it sit for a while. In the meantime, we mashed up and scraped out the soft meat from green coconuts and placed it into another bowl.

Coconut water was added and before long we had a squishy coconut soup of sorts. Tahi told Aidan and Bena to collected leaves from the Kahaya Tree, 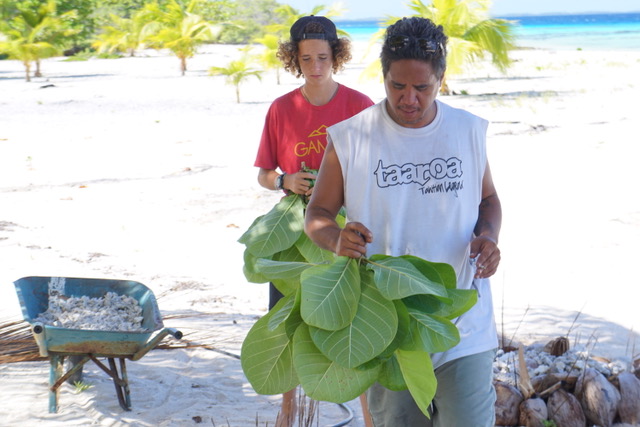 and while they were busy with that I was put to work adding flour to the coconut soup stuff. He told me to mix in enough flour till I had a wet, sticky dough.

Once the dough was ready, Tahi demonstrated how I was to place dough between two kahaya leaves and press them together.

By this time the fire had died down nicely and the coral chunks were hot and ready to cook our coconut bread. 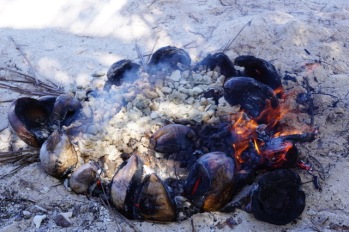 We placed the dough filled leaves on the fire, and Tahi said, ‘ok Mama, cook the bread,’ and left to prepare fish with Kjira. 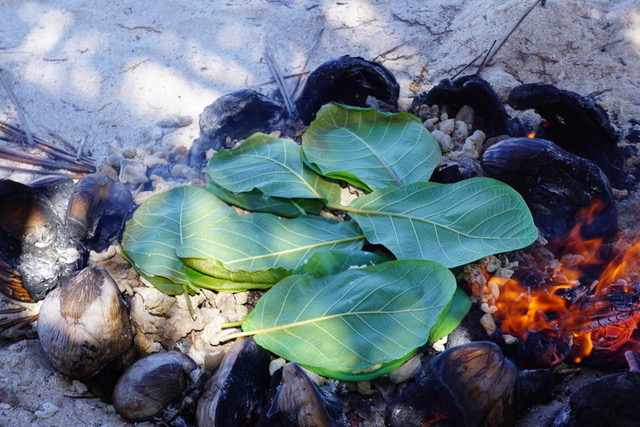 Tua walked out into the water to collect his clean pots (thanks to the fish), and 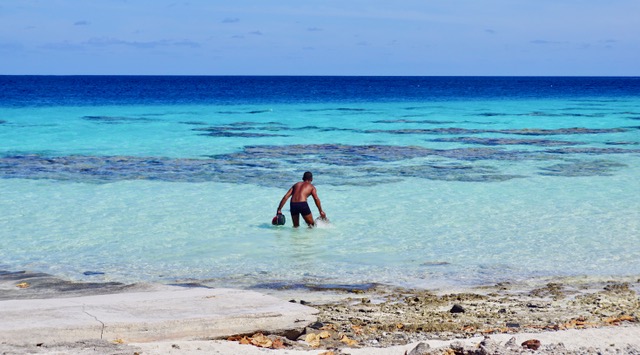 Kjira and Tahi sat at the waters edge, washing and preparing the parrot fish.

While I had been preparing dough, Tahi has asked the girls to squeeze lemons, which they did beautifully. He also taught them how to make the coconut milk, by taking the coconut water/shredded coconut mixture that had sat for a while and squeeze it through cheese cloth into a pot.

My bread cooking project was progressing well. I periodically turned the leaves and rearranged them on the fire.

Before long, just as the leaves were dry enough to peel away from the dough, the dough was cooked with a pretty leaf imprint on it. 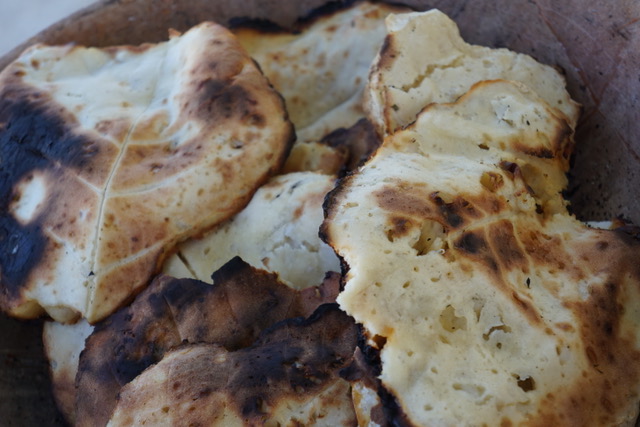 Tahi wrapped the parrot fish in kahaya leaves and placed them on the fire at that point.

He had cut up some raw blue parrot fish and placed the meat in a bowl with a combination of the freshly squeezed lemon juice and the coconut milk, and called it ‘Poisson Cru.’ Soon we were all seated at the table for the feast we had just prepared:

We ate like kings, with kahaya leaves as plates, coconut milk to dip bread into, poisson clu and roasted parrot fish. Our drink was delicious coconut water.

The view from our dining table was spectacular. 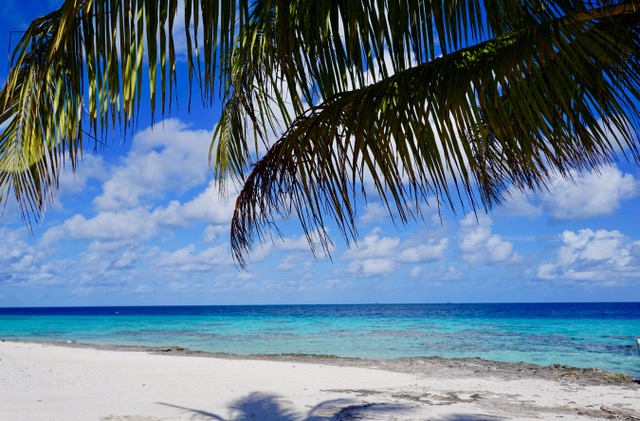 Tua mentioned that he loves to spearfish, and showed us his spearfish gun. Bena told us that Tua’s mask broke some time ago, so we gave him a new one. He was very grateful. 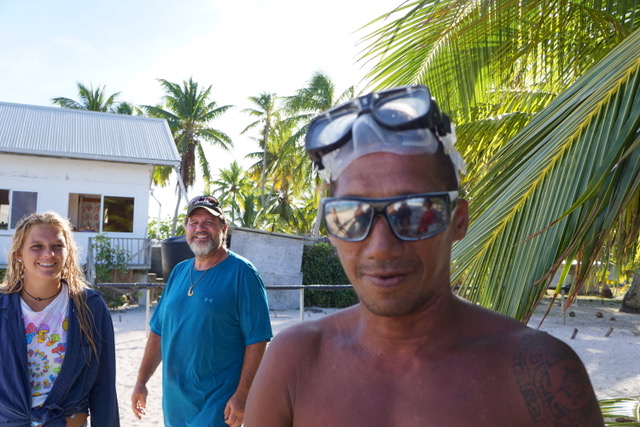 After relaxing with full bellies for a while, we figured we’d best get on our way back to the village, so we took some group photos, and Tua took the opportunity to steal a kiss from Jude!

We raised anchor, leaving only Tua behind, and made our way south. We really love our new Tuamontun Family, and love all that they have taught us. It was going to be tough leaving them the next morning when we sailed on to Fakarava.

As we reached the village, Bena told us that he really wanted us to meet his parents, and asked if we could meet him on the beach at 8am the following morning. We told him we’d be honored.

The sunset that night was as beautiful. We talked about our adventures together and all that we had learned. It’s a good life, especially if we are open minded and recognize and love goodness in those around us.